What is Europe? It’s not a country. It’s not a continent. Geographers for ages have never been able to fully ascertain what it is exactly.

Europe has always been very nebulous and indistinct. According to Webster’s, it’s a continent to the east of the Atlantic Ocean, to the north of the Mediterranean Sea, and to the west of Asia. So I guess it is a continent. The more I read about Europe in the dictionary, the clearer it is becoming. Europe is filled with a bunch of countries. Not just one. So that’s why it can be kind of confusing if you thought it was just one. That’s why I’ll be rooting for the United States when they take on Europe in the Ryder Cup.

You don’t need a dictionary to know what the United States is…but it does help.

According to Webster’s, The United States is a country of 50 states covering a vast swath of North America. That makes sense. So now that we fully understand the two combatants for tomorrow’s golf showdown let’s take a look at some of the players to watch.

The US team is going to win this one running away.

They are way too talented for the Europeans (continent or no continent!). We are looking at something like an 18-10 drubbing. Therefore, I will not be previewing any of the Euro golfers as it will be a waste of yours and, more importantly, my time (I have to write this tripe). Below are each of America’s Ryder Cup golfers and the number of points they will score this week. 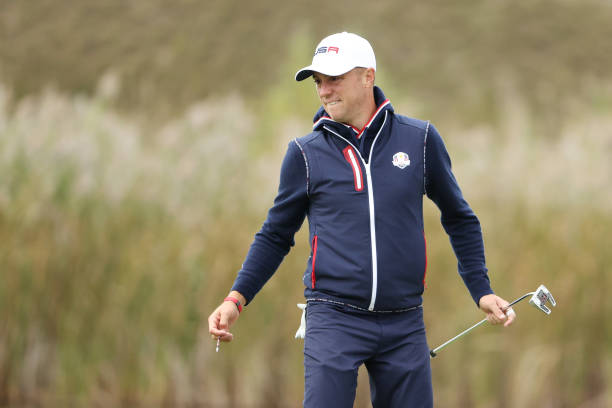 KOHLER, WISCONSIN – SEPTEMBER 23: Justin Thomas of team United States reacts on the green during practice rounds prior to the 43rd Ryder Cup at Whistling Straits on September 23, 2021 in Kohler, Wisconsin. (Photo by Patrick Smith/Getty Images)

Justin Thomas- this guy is going to have a big week. He’s a killer on the course and off it. He was almost canceled earlier this year for uttering a homophobic slur (you know the one) after missing a short putt at the Sentry Tournament of Champions. Ralph Lauren yanked their sponsorship, but he has carried on and seems to have fully recovered. A microphone captured the slur. Do they have microphones at NBA games? I’ve sat courtside and heard 10x worse. Strange. Anyway, some reporter asked him at the press conference Monday if he felt odd wearing Ralph Lauren gear as they were a sponsor of the Ryder Cup team. It was a cheap shot question (enemy of the people!), and JT shot him a look and gave a disdainful answer. This guy knows how to handle himself. He went 4-1 in his only Ryder Cup in 2018 and beat European stalwart Rory McIlroy in singles for the first match on Sunday. This could’ve been a huge win had the US come back from the 10-6 deficit, but they fell way short. I expect at least 3.5 points out of Thomas this week and would not be surprised if he is the MVP of the team. 3.5 points 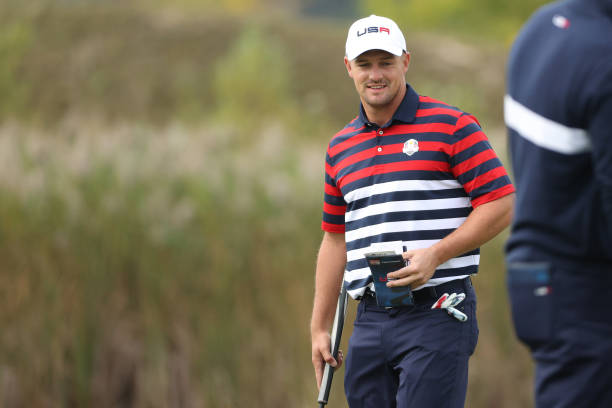 KOHLER, WISCONSIN – SEPTEMBER 23: Bryson DeChambeau of team United States looks on during practice rounds prior to the 43rd Ryder Cup at Whistling Straits on September 23, 2021 in Kohler, Wisconsin. (Photo by Patrick Smith/Getty Images)

Bryson DeChambeau- I’m sensing a big week from Bryson as well. He has been unfairly vilified by fans who have sided with jagoff Brooks Koepka in their little feud. The taunts of “Brooksy” were infuriating to true sports fans mainly because it’s such an idiotic heckle. Bryson should have employed some of his gym bros to walk around the galleries and confront any dim-witted fan, thinking that’s a funny thing to yell that at one of the greatest golfers in the world. Brooksy?? Someone explain that to me. I have a long history of heckling athletes out of spite and jealousy. But when I did it, there was some amusement and panache. My first go-round was old Memorial Stadium on 33rd Street in Baltimore. Newlywed Jose Canseco was caught cheating on his bride with Madonna of all people (she was a very loose woman even back in simpler times). My friends and I brought a big bedsheet with a spray-painted “Hey Jose, Who’s That Girl?” To Jose’s credit, he was such a cad he almost fell down laughing. I remember mocking Derek Jeter for dating a 40-year old Mariah Carey when he was 27. He called me a psycho. He had no sense of humor about that. When Scott Brosius was playing the hot corner for the Yankees, I had a cheer, “Hey, hey Brosius, your looks are atrocious.” I really hated the Yankees. When Bryce Harper was playing for the Nationals, I started chants of “Bruce, Bruce, Bruce!!.” Some fan later stole my bit and put it on a sign, and got all the credit. I will be remembered in heaven, though. So you can see why “Brooksy” is so offensive to me. Anyways, Bryson should be a man on a mission to win back the crowd. This golf course has some reachable Par 4’s, which should bode well for how long he hits the ball. 3 points.

Daniel Berger- This is his first Ryder Cup, and he was one of the last selections to the team. The last pick is never any good, as we’ve all known that since grade school. 1 point.

Xander Schauffele- Another Ryder Cup rookie and also Olympic Gold medalist in golf. I’m surprised more golfers don’t want to represent their countries in the Olympics. Winning a gold medal goes on your tombstone. So why would you pass up that opportunity? Xander was gung-ho in Japan and closed out the tournament with a clutch up and down from 100 yards to secure the gold medal. This will give him tremendous confidence going forward. 2 points.

Jordan Spieth- Look for him and Justin Thomas to dominate again in the fourball and foursome matches. They make quite a pair. Both grew up playing in Texas. Good friends and just constantly playing with one another and against other great golfers. That’s why they know how to handle this kind of pressure. They grew up with it. Constant competition. It is important to watch the Ryder Cup to know the difference between Foursomes and Fourball. If someone could tell me the difference, I would very much appreciate it. 2.5 points. 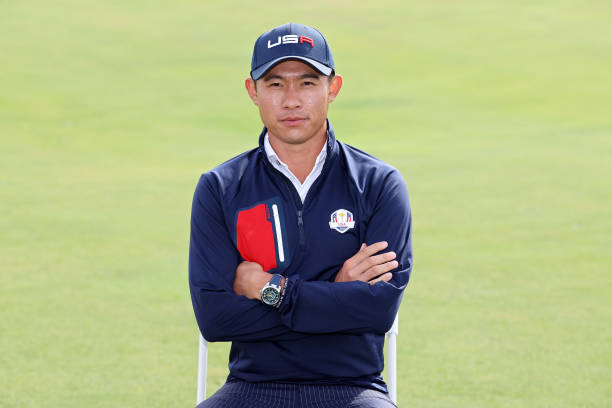 KOHLER, WISCONSIN – SEPTEMBER 22: Collin Morikawa of team United States poses for a photo prior to the 43rd Ryder Cup at Whistling Straits on September 22, 2021 in Kohler, Wisconsin. (Photo by Warren Little/Getty Images)

Colin Morikawa- he’s 24 years old and already owns two major championships. He’s the best ball-striker in the world which surprisingly doesn’t make him the best golfer in the world. He has been struggling recently, though, so I don’t have high expectations. 1 point

Harris English- I follow golf very closely, and I have no idea who this guy is. 0 points. 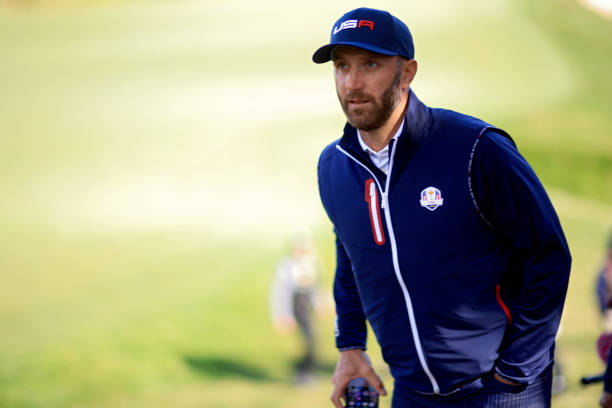 KOHLER, WISCONSIN – SEPTEMBER 22: Dustin Johnson of team United States walks during a practice round prior to the 43rd Ryder Cup at Whistling Straits on September 22, 2021 in Kohler, Wisconsin. (Photo by Mike Ehrmann/Getty Images)

Dustin Johnson- DJ, has an overall losing record in the Ryder Cup. Not that surprising because it doesn’t look like he cares all that much. After winning the Masters last year, I can’t imagine he’s going to start caring now. The man has it all. The most coveted title in golf, boatloads of cash, and a beautiful family with Paulina Gretzky. Are they married yet? How has he been able to hold out so long? Impressive. 1 point

Tony Finau- this guy is very likable. Five kids and wants more! He’s only 32. What have we been doing with our lives? I don’t think he’s been playing that well lately but let’s give him 1 point for his fecundity. 1 point

Brooks Koepka- The villain in the Bryson feud. Not a great guy. Great golfer, though. And one of the rare personality types that are immune to pressure. That’s why he can raise his game when golf matters most. To him, that’s major championships and not the Ryder Cup. 1 point.

Scottie Scheffler- I don’t know much about this guy, but he is fairly handsome. That ought to be good enough for a point. 1 point

Patrick Cantlay- Smart guy, I think. He’s one of those guys that when he speaks, it sounds like he’s smart, but when you go back and read the transcript of what he says, it’s all fairly mundane and uninteresting. John Thompson, the old Georgetown basketball coach, was like this. For some reason, he had a talk show in DC, and he would ramble on, and people thought he was spinning some very thoughtful and compelling yarns. One day I wrote some of it down and read it…complete gibberish. Great coach, though. Cantlay is playing some good golf now, but I only have one more point to give out (I said the US would win 18-10), so I guess he only gets one point. 1 point.