Cleveland Browns running back D’Ernest Johnson had one heck of a game on Thursday, adding another amazing step in his journey from making a living on a fishing boat to becoming a blossoming NFL star in only three short years.

And he gave thanks to God for his good fortunes.

Johnson was working as a member of a fishing boat crew when he was finally drafted at 22 years of age in 2018. And thanks to the coronavirus and the needed time to pay some of his NFL dues on the bench, Johnson never really had much of an opportunity to show what he could do on the gridiron. But all that changed on Thursday, and after he stepped out onto the field, he made everyone sit up and take notice.

The third-string running back finally got his moment in Cleveland’s 17-14 win over the Denver Broncos, and when the last second had counted down, Johnson had rushed for 146 yards and earned one touchdown.

“We might have lost that game without that performance that we had from him,” former Browns running back Greg Pruitt enthused after the game, according to Fox 8.

It took a series of injuries for some of the Browns’ best starters before Johnson got his chance in the spotlight, but he stepped up in a big way, and it was a dream come true.

“Coming from a fishing boat, I always dreamed of playing in the NFL. Even when playing in the AAF, I always dreamed of playing here in the league. Being able to be on this team is a blessing. It is always a dream come true to be able to be here. To be able start and come out here and help the team win, that is the best feeling,” Johnson said in a post-game interview. 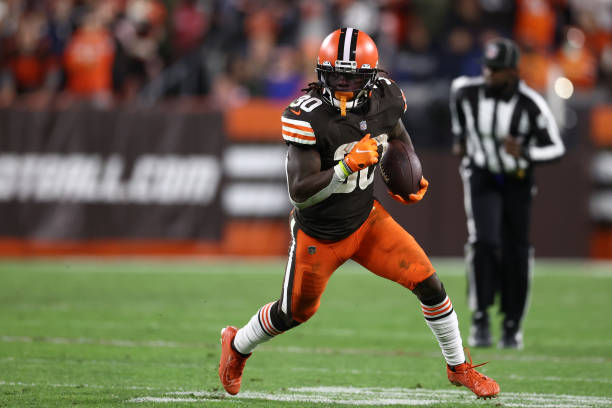 Pruitt continued with his high praise for Johnson, adding, “We thought we had two of the best (running backs). We might have three of the best.”

Johnson added that he didn’t know how to celebrate when he made that exquisite touchdown, but he knew who to thank.

“I wanted to celebrate, but I did not know what to do. I just yelled because it has been a long journey, man. To get your first start and get 100 yards and your first touchdown, that ain’t nothing but God,” Johnson said.

“D’Ernest Johnson to me is a warrior and a great teammate. What he has fought through in his career and then to go have a night like that and to end it how he did on that this down, I thought was just outstanding,” the coach said.

“A guy like him, who the locker room loves and everybody loves – a great young family and just a good overall person – come in here and having an incredible night like that and make some big-time plays for us on a national stage, not just his family here watching but everybody back home,” backup quarterback Case Keenum said after the game.

My life has always been about The Slow Grind 🐢™️

Here is my story. #DawgPound