The Wall Street Journal revealed on Sunday that Dinigeer Yilamujiang, a Uyghur athlete who China made an Olympic torchbearer for the Opening Ceremonies, violated Olympic rules and failed to meet journalists after a poor performance on Saturday.

Upon Yilamujiang’s 43rd place finish in the cross-country ski event, she did not pass through the mandatory media zone for interviews, a violation of the International Olympic Committee (IOC) rules, according to the Journal. Reporters waited indefinitely for her, as no officials notified them that she would not be coming. The newspaper noted that her whereabouts remain unknown to foreign reporters at the time of the article’s publication. 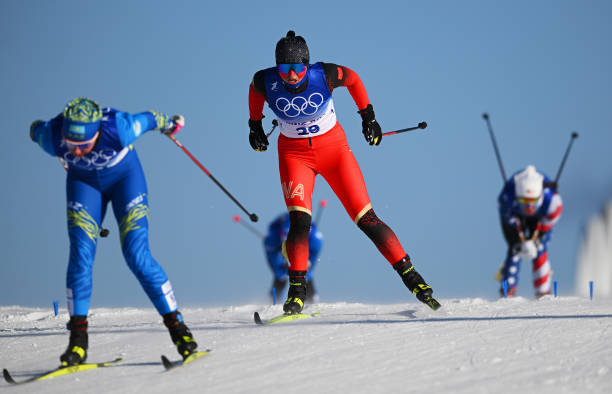 The IOC declined to comment to the Journal on Yilamujiang’s absence. Likewise, China’s National Olympic Committee did not respond to the publication’s request for comment.

After the event, Yilamujiang’s name was reportedly barely mentioned by Chinese state media.

“Though Ms. Yilamujiang wasn’t available to answer journalists’ questions after Saturday’s race, China’s state-run broadcaster did have an exclusive interview, in which she expressed incredulity at having been entrusted with the role of torchbearer,” the Journal reported. 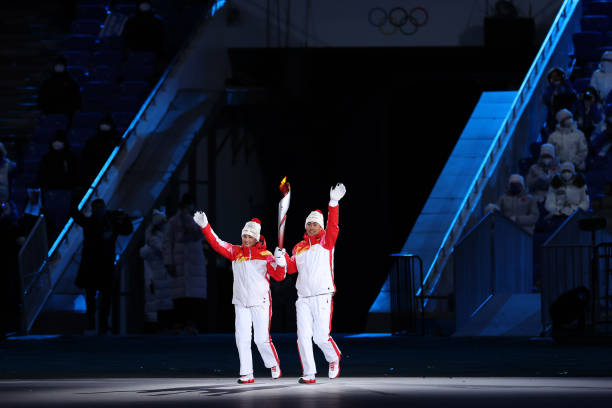 BEIJING, CHINA – FEBRUARY 04: Torchbearers Dinigeer Yilamujiang and Jiawen Zhao of Team China hold the Olympic flame during the Opening Ceremony of the Beijing 2022 Winter Olympics at the Beijing National Stadium on February 04, 2022, in Beijing, China. (Photo by Lintao Zhang/Getty Images)
“Since the country gave me such an important mission, I had to fulfill it,” Yilamujiang said in a video airing on state media that reportedly appeared to be taped before the cross-country competition ended in defeat for her.
Yilamujiang, 20, is Uyghur, an ethnicity of Turkic descent native to the occupied region of East Turkistan, which China calls Xinjiang. China is currently engaging in genocide of the Uyghur population and other ethnicities in the region, including Kazakh and Kyrgyz East Turkistanis.
Yilamujiang’s appearance at the Opening Ceremonies appeared to be an attempt by Beijing to give the appearance of tolerance towards Uyghur people in the face of over a year’s worth of protests calling for governments, athletes, broadcasters, and viewers to boycott the Olympics in solidarity with the victims of genocide. But, ultimately, no government abstained from sending athletes, and major networks are airing the Games with little commentary on the fact that they are happening in a totalitarian state.
Chinese Olympic organizers in a Saturday press briefing would not answer questions about why Yilamujiang was selected for the distinguished honor of torchbearer, reportedly preferring to deflect to the visional appeal and celebration of the opening ceremony.
Chinese Olympic organizers later followed up with the Journal and described the torchbearer’s selection criteria as “stringent” and worthy of “outstanding achievements.” However, the IOC did not answer the Journal’s questions about Yilamujiang’s selection.
Breitbart News reported on Communist China’s human rights abuses:

The Uyghur Tribunal, an independent effort by human rights experts and international legal scholars to assess the genocide of Uyghur people in the occupied region of East Turkistan, found in a judgment issued Thursday that the occupying force, China, is guilty of genocide beyond a reasonable doubt.

China considers East Turkistan a province known formally as the Xinjiang Uyghur Autonomous Region (XUAR). For much of the past decade, communist dictator Xi Jinping has implemented policies intended to eradicate Islam, the local religion, and Uyghur language and culture. Evidence suggests that, starting at a major scale in 2017, Chinese officials began trapping Uyghurs and members of other Muslim-majority ethnic groups in concentration camps, where survivors say they faced torture, systematic rape, indoctrination, slavery, and potential execution.

Taking into consideration this evidence, the Uyghur Tribunal also found that China’s Communist Party was guilty of torture and crimes against humanity “beyond a reasonable doubt,” the highest legal standard of proof.