Earlier this month, Brian Flores filed a lawsuit against the NFL and three specific franchises for alleged racist hiring practices, claiming that the league discriminates against black coaches. Among the many explosive allegations, Flores also claimed that Dolphins Owner Stephen Ross offered him as much as $100,000 per game to lose so that the team would own the first overall pick in the 2020 NFL Draft.

Brian Flores' class action lawsuit against the NFL – he is being represented by the same firm that represented Harvey Weinstein victims and former Fox News employees in their discrimination cases https://t.co/1EqJ7qDA4A pic.twitter.com/jrSjm12XHT

Bloomberg first reported that Loretta Lynch would serve on the NFL’s defense team along with lawyer Brad Karp.  She previously served in the Obama administration toward the end of his tenure and is a partner at Paul, Weiss, Rifkind, Wharton & Garrison, according to Fox News.

Lynch became a household name among conservatives during the 2016 election when she secretly met with former President Bill Clinton while her office was investigating former Secretary of State Hillary Clinton for her use of a private server to handle classified information.

In his lawsuit against the NFL, Flores also said that he was unfairly treated when interviewing for the head coach position with the Denver Broncos in 2019, alleging that John Elway showed up hungover for the interview. He also claimed that the New York Giants discriminated against him when he interviewed to be head coach. All three teams have denied the allegations. 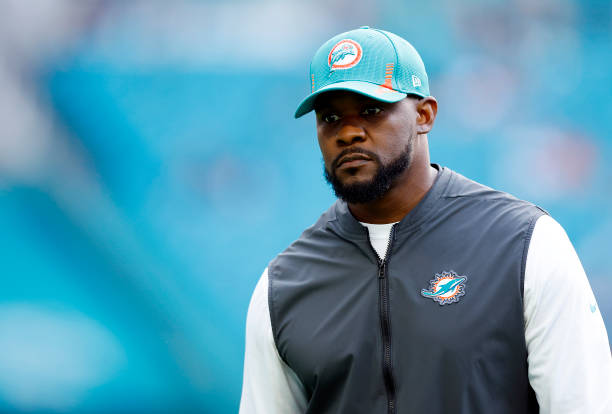 MIAMI GARDENS, FLORIDA – JANUARY 09: Head coach Brian Flores of the Miami Dolphins walks the field prior to the game against the New England Patriots at Hard Rock Stadium on January 09, 2022 in Miami Gardens, Florida. (Photo by Michael Reaves/Getty Images)

“We are pleased and confident with the process that resulted in the hiring of Brian Daboll,” the Giants said. “We interviewed an impressive and diverse group of candidates. The fact of the matter is, Brian Flores was in the conversation to be our head coach until the eleventh hour. Ultimately, we hired the individual we felt was most qualified to be our next head coach.”

“We vehemently deny any allegations of racial discrimination and are proud of the diversity and inclusion throughout our organization,” the Dolphins said. “The implication that we acted in a manner inconsistent with the integrity of the game is incorrect. We will be withholding further comment on the lawsuit at this time.”