EXCLUSIVE: "Trans people don't transition for athletics. We transition to be happy and authentic and our true selves."

On Wednesday, Jenner told the hosts of Fox & Friends that Lia Thomas isn’t to blame for the controversy in college sports.

“This is not Lia Thomas’ fault. She played by the rules … Really, my concerns are with the NCAA. Their rules have to be a lot more stringent. I think they have to be more difficult. I don’t think just one year of hormone replacement therapy is enough,” Jenner said.

Thomas, of course, was but a mediocre college swimmer when competing in the men’s division for three years at the University of Pennsylvania. But after taking a year off to transition to a woman, Thomas returned and soared to the top of the women’s division in the NCAA, winning the championship for the 500 freestyle event on March 17.

A 1976 Olympic gold medal winner, Jenner pointed out the obvious physical advantage Thomas had over the other swimmers during the 2021-22 season.

“When she’s standing on the line, she’s taller, bigger, she’s got a longer reach, she’s got bigger hands. She has got a tremendous advantage over the women,” Jenner continued. “But I respect her right to be able to transition, but I think it’s very difficult. She did it to be happy, and she talked a lot about in the interview, about being happy.”

“But on the other hand, she may be happy, but I’m sure the girl, the cis[gender] girl, and other girls a block over from her sees this very large woman who she knows she can’t beat,” Jenner said. “I don’t think she’s that happy. I don’t think the person that missed out on making it to the NCAA by one position who now all of a sudden doesn’t go, I don’t think she’s happy.” 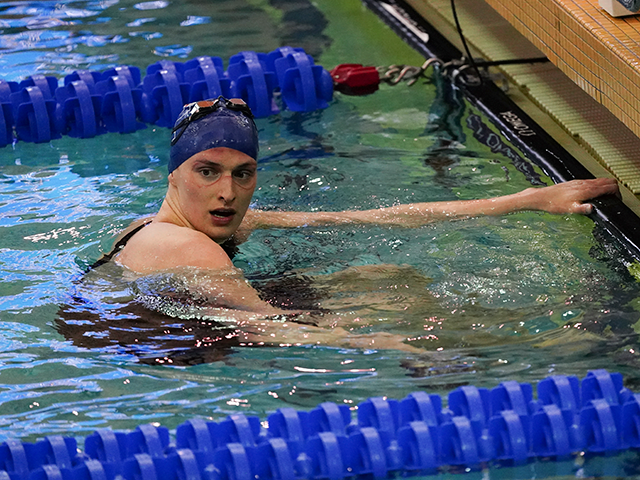 Jenner also offered a solution, saying that transgender athletes should either continue competing in the category corresponding to their birth gender or compete in their own, separate category.

“I’ve said from the beginning, I don’t think biological boys should compete in women’s sports. It’s just not fair. I’ve always been out to protect women’s sports and I think we need to do that. And the only way you’re going to do that is to really look at these rules and find out what is going to work where a trans athlete does not have a big advantage over the cis women,” Jenner added.

Asked if Thomas bears any responsibility, Jenner did lay some small bit of blame on the college athlete.

“I’ve always felt from the beginning that along with this transition, there also comes an awful lot of responsibility, an awful lot of integrity and people will be watching on how you deal with this issue and how you treat other people. And I think that’s really important,” Jenner concluded. “Lia’s young, she just graduated from college, and I think in a lot of ways she’s done a good job, but in other ways it’s been difficult because she’s been out for her happiness, but the happiness of a lot of other people has not really been considered”