In its Oct. 3 article, the AP happily notes that “Doc Rivers is at ease using his platform as an NBA coach” to push his hard-left views on players at work and to use his coaching time to attack Donald Trump and his voters. 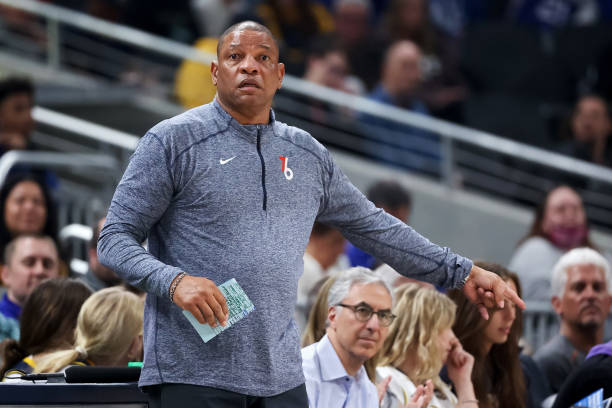 Head coach Doc Rivers of the Philadelphia 76ers looks on in the first quarter against the Indiana Pacers at Gainbridge Fieldhouse on April 05, 2022, in Indianapolis, Indiana. (Dylan Buell/Getty Images)

The Philadelphia 76ers coach particularly focused on the idea that America should be put first in the minds of Americans.

“When you hear, ‘America first,’ that scares me, because I’m a Black man and that’s not including me,” Rivers told the Associated Press. “I want us to all be included. I want us all to function with each other.”

The claim, of course, is a progressive lie. No “America first” supporters claim that the slogan does not apply to blacks, Hispanics, Asians, or any other minority.

The AP added that “Rivers used training camp not just as the usual time to rehash X’s and O’s but as a daily history class.”

“All of it is good for us,” Rivers said of his attempt to indoctrinate players in radical leftism instead of training them for their sport.

“Rivers and the Sixers organized field trips to the Old Slave Mart Museum, often staffed by individuals who trace their history to the enslaved people of Charleston, and the Avery Institute of Afro-American History and Culture. Citadel President Gen. Glenn Walters and retired professor and historian Bernard Powers both spoke to the team,” the AP wrote approvingly.

Rivers was thrilled to help teach his players about the African slave trade, though it is doubtful he let players know that other Africans routinely enslaved Africans before they even got to the slave ships. 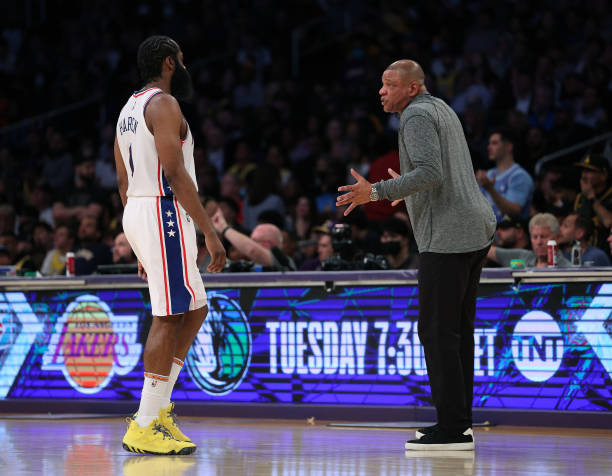 “Teaching American history is under assault right now. And it’s not Black history or teaching about slavery, it’s American history,” Rivers told the AP. “And so I was amazed. The first thing that I was taught the other day was, how many players, and not only players, coaches, came up to me and said, ‘Wow, I never was taught that in my history class.'”

Rivers has also pushed his anti-gun ideals on his players and told them to support strict gun control measures — effectively telling these young men to disarm themselves and their families.

The coach told the AP that he wasn’t always very political. But today, he said, “we have this separation of race now, of pitting races against each other.”

Rivers went on to note that he is an anti-police activist. “I think we need police reform,” he said. “Our training has to be better. The thing that bothers me is that everyone should want that, including the police.”

The 60-year-old leftist coach is also an activist off the court as part of the board of the NBA Social Justice Coalition, a group that pushes leftist ideology and lobbies Congress to back so-called social justice causes. So when Joe Biden signed his George Floyd executive order in May, Rivers was on hand.