I have my spot of tea, eight points of ammunition, and English traitor Jeremy Blake in the sights of my Energy Lance. Jeremy doesn’t know this, but I’ve killed him before, I’m going to kill him again now, and I’ll probably do it two or three more times after this game. There’s an industrial mech war on, for God’s and Queen’s sake, and traitors get craters. 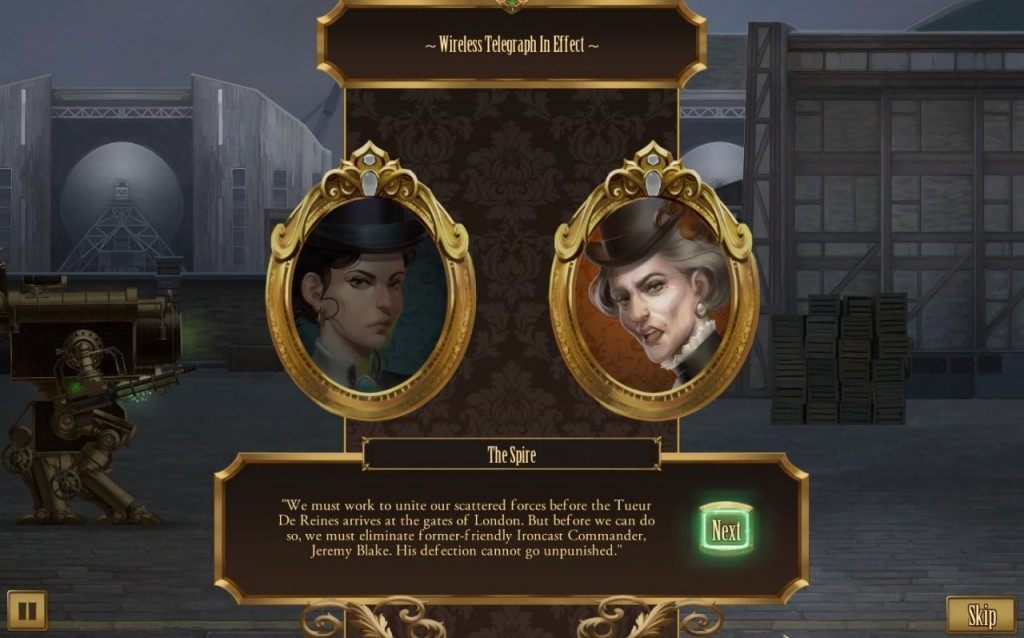 In the multiverse, I’ve killed Jeremy Blake at least 100 times.

Ironcast is a strategy puzzler from Dreadbit, published by Ripstone this March and updated in July, focusing on an alternative version of Victorian England. Here enormous steam and electricity driven mechs called Ironcast battle each other while talking trash via wireless telegraph.

A desperate war with the invading French means no quarter will be asked and no quarter given — as the partially randomized story continues you’ll be asked to do both brave and terrible things to defend your country: double-crossing friends, performing daring raids with your half-exploded fighting machine, and, as this is a roguelite (meant to be replayed upon death or completion) killing Jeremy Blake repeatedly. (There’s just no compelling reason not to choose that second mission, sorry Jeremy.)

After choosing from up to four different pilots and Ironcasts, though you’ll have to unlock them all, you’ll spend the next hour or so waging war with the French by choosing one of three randomly selected missions to complete. Each mission plays a little differently, but in general your Ironcast will fight an enemy Ironcast or Steamtrain to the death.

This is, however, broken up by a series of oddball missions like negotiations, collection missions, endurance fights, or saving bogged-down friendly troops, so while the puzzling can become repetitive, the metagame never becomes tedious. The missions function similar to Puzzle Quest, except you drag along a line of similarly-colored resource nodes instead of moving the pieces themselves, with longer chains giving more experience. You’ll need to master two game systems in Ironcast — the puzzle mechanics of collecting the resources you need to run your Ironcast and managing the actual battles, which has a surprising amount of depth. You’ll have to manage your systems carefully though — run out of coolant and you’ll overheat; no repairs and your Ironcast’s systems will quickly fail; no ammunition, no guns; no power, and you can’t move to avoid shots or power your all important shield.

Between rounds you’ll upgrade your Ironcast in a system that’s simple but pretty deep; certain builds and strategies work more reliably for me than others, but it’s certainly not a min/maxer sort of game. Weapons are up to certain tasks but not others, so you’ll need to be careful what you select. The armaments are nicely varied, though I expect everyone will keep an energy weapon on board as a can opener for shields. Your drives and shield systems can be upgraded, and various augmentations earned by leveling up can be attached to weapons. Ammunition, energy, coolant, and hit points can all be increased. And you’ll be constantly repairing here as well, since enemies can dish it out as well as they can take it. What you equip, buy, and your play-style matters, and a number of combinations of gear, drivers, and styles can be successful in this game. Still, you will have to take a bit of care in your selections if you intend to go the distance. 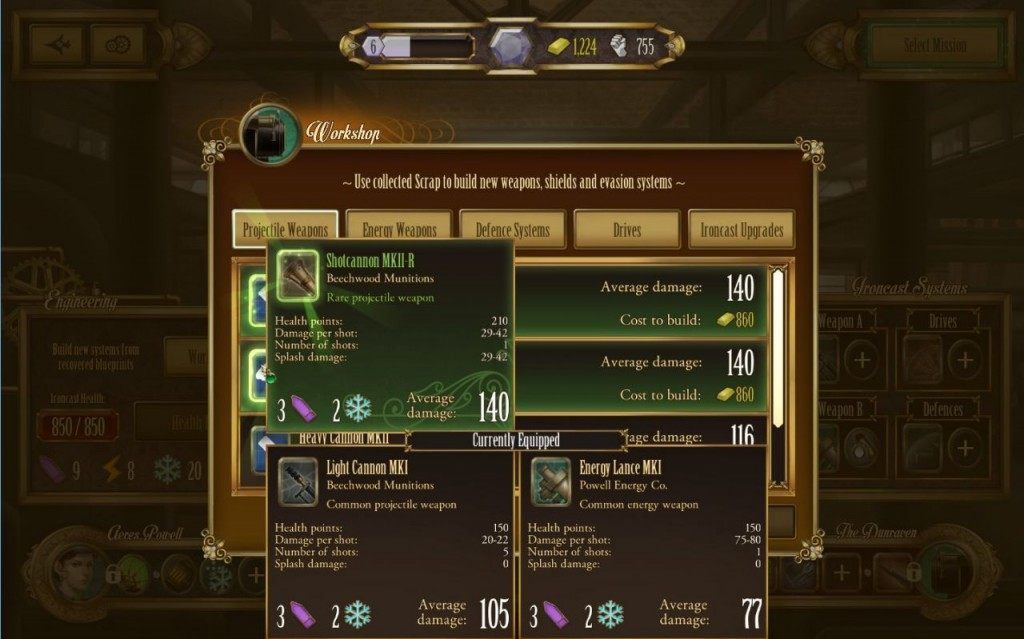 Customize your Ironcast to have the mech-wrecking experience right for you.

As the game continues, things get considerably more difficult, so get used to seeing your Ironcast explode. It’s never easy, and whenever it starts to feel routine the game throws a curve ball at you or tempts you with a challenge far above your abilities to test your greed. When you win, you’re rewarded with experience points you can use to level up (unlocking series of rewards), scrap (used to buy new systems), and blueprints of new weapons and systems to be built. When you lose, you die.

As I’ve said, you’ll die a lot in Ironcast. That’s OK though, since each playthrough gives you experience towards a series of rewards that make the game easier. While the difficulty will be punishing on your first few games, if you stick with it you’ll find yourself getting a little further, and a bit more powerful, with each attempt. The challenge is significant when you get started since the game doesn’t do a lot of holding your hand, and the learning curve is steep after the first missions. That only makes victory so much sweeter when you start to win fights decisively. Like all roguelites (games designed for replayability with proceedurally generated components), the randomness can be a real challenge in this game, but unlike similar games where I’ve been frustrated by the randomness, Ironcast is pretty fair. I found it worked as wildly in my favor as against me. I don’t mind games that help or hinder me as long as the distribution of the two is even. 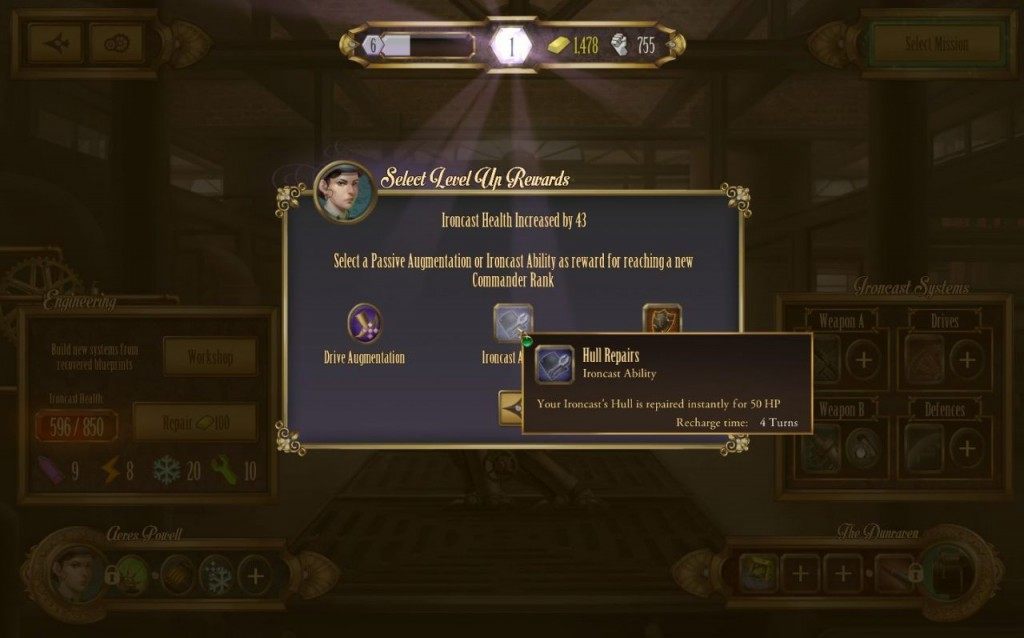 Law and Order: SVU joke about Leveling Up goes here.

The story about an alternative history United Kingdom and France engaged in a desperate, dirty battle to win the upper hand is filled with fantastic dialog, and the number of missions and optional forks within missions make replaying to achieve unlocks less tedious since the war plays out a little differently every time. The twist in the middle and the plot revelations aren’t quite unexpected, but they’re executed well — the story never drags or annoys. The art style  really works for the game — while steam-punk has become a bit overused, Ironcast‘s H.G. Wells aesthetic mixed with visual novel-style storytelling gives the game a fairly unique look that I’m a fan of. The Ironcasts fire, burn, and explode in a way that’s visually pleasing, and the soundtrack is quite nice.

Should you buy Ironcast? I’d recommend so. I’ve gotten a significant amount of play time out of this title over the summer, and I still play it for pleasure (especially post update which added some nice additions). If you’re in the market for puzzle games, mech games, or games where you get to fire electricity cannons at French people while stealing their tea (yes, that’s a mission), Ironcast is a solid choice for you.