Io-Interactive is getting ready to reboot Hitman, its most iconic franchise, except it isn’t really a reboot.

With all of the information trickling out about what looks to be the most ambitious game in the franchise’s history, it’s time for a briefing. After reading, this article will (probably not) self destruct.

Hitman is an actual murder simulator. Watery faux-controversial games like Hatred have tried to best its chilling depictions of homicide, but the icy antihero of Io-Interactive’s acclaimed series is the real thing. No frills, no bombastic one-liners, just the humble story of a boy and his garrote … and a whole lot of briefcased cash.

The eponymous assassin’s field of operation in the latest game will be far broader than in any past adventure. While the Hitman series has never shied away from exotic — and often depraved — locales, this time the expansion is more literal. Io-Interactive is describing the enormously detailed locations as “sandbox” environments, though it’s certainly one of those sandboxes that your mother would need to check for bits of glass and used needles.

Instead of linear levels with obvious and specific ways in which you should operate to finesse your target into the afterlife, the new Hitman is about creating an atmosphere absolutely packed with options. No matter what your preference, the developer intends to make sure you have the tools and opportunity to complete your mission however you choose.

Italy, France, and Morocco will be included in the initial offerings, part of the expanded collection of content made possible by the game’s abrupt delay. A couple of days ago, we were introduced to the sunny coastal town of Sapienza. The glimpse was undeniably cool, from the wholly in-game footage on display to the throbbing beat of a soundtrack that sounded as if it was pulled directly from the intro to a James Bond film. An array of approaches were on display, along with plenty of lingering shots of the gorgeous scenery. If this clip is any indication, we’re in for a real treat.

More content previews are sure to come, but perhaps the most complicated part of this story is the manner in which that content will be delivered. In a strange hybrid of traditional and episodic content, Hitman will be delivered first as a feature-complete title on March 11th, but with only half of the planned narrative. You’ll be able to pick this up for $34.99, an unusual price-point in the AAA spectrum. The rest of the content will be delivered on a monthly basis, through April, May, and June, for an additonal $29.99, or the entire bundle can be bought for $59.99. In between, Io-Interactive will also be holding live events, in which targets are made temporarily available for a global virtual assassination race. 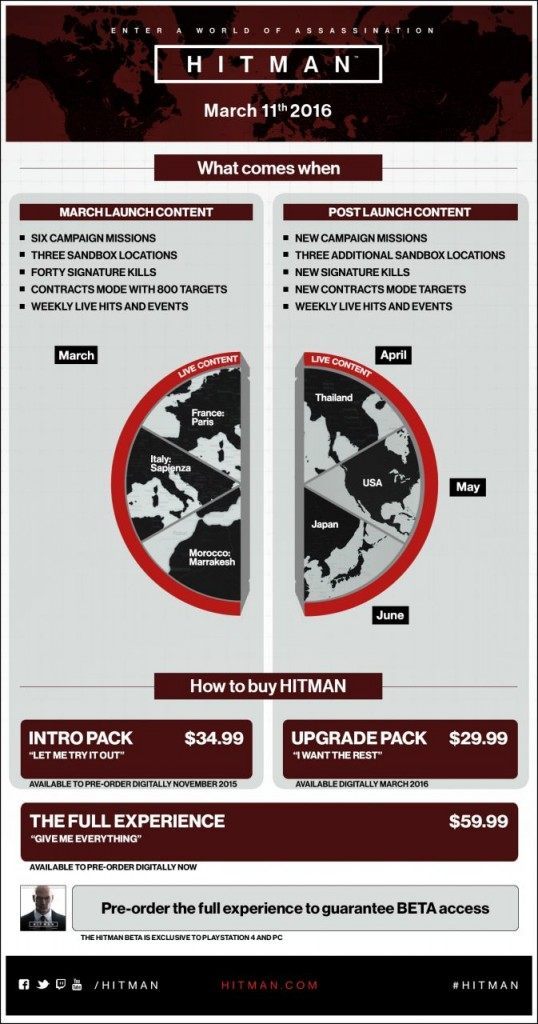 The game was initially announced on June 15th, with an intent to release in December of this year. September rolled around, and with it the game was delayed to March 2016. Waiting is always difficult, especially when the game in question looks every bit like what the series has been circling since its inception. But as Agent 47 would tell you, patience — calculating, surgical patience — is a reward all its own.

Further intel will be made available as it is received. As you were, agent.