Libertarian commentator Lauren Southern was assaulted and reportedly “covered in piss” by activists in the streets of Vancouver, in a new low for the regressive left. Her crime? Saying there are “only two genders.”

The incident took place Friday evening in downtown Vancouver, British Columbia, during an “anti-fascist” protest against a visiting libertarian speaker.

Southern, accompanied by her Rebel Media cameraman and a team from PressForTruth.ca, met protesters on the street and engaged them in a spirited debate about feminist anti-rape culture crusades and gender identities. Southern’s insistence that there are only two genders annoyed the left-wing activists, who accused her of being “hateful” and “transphobic.”

The encounter, which was recorded by Press For Truth and can be watched below, concluded when a protester sneaked up behind Southern and, shockingly, poured a bottle of liquid, which Southern later said she believed was urine, over the libertarian commentator. A scuffle quickly broke out as two men attempted to restrain the protester, who was nonetheless able to flee the scene.

Unfazed by the attack, Southern continued her broadcast, calmly fielding questions from Press For Truth just a few minutes after the incident.

Many of the protesters at the event wore masks to conceal their identities, a familiar tactic of thuggish anti-fascists and “black bloc” protesters who engage in political violence.

In another image, one of the masked thugs can be seen flipping off the cameraman — a comparatively mild prelude to the depraved assault that takes place later in the video. 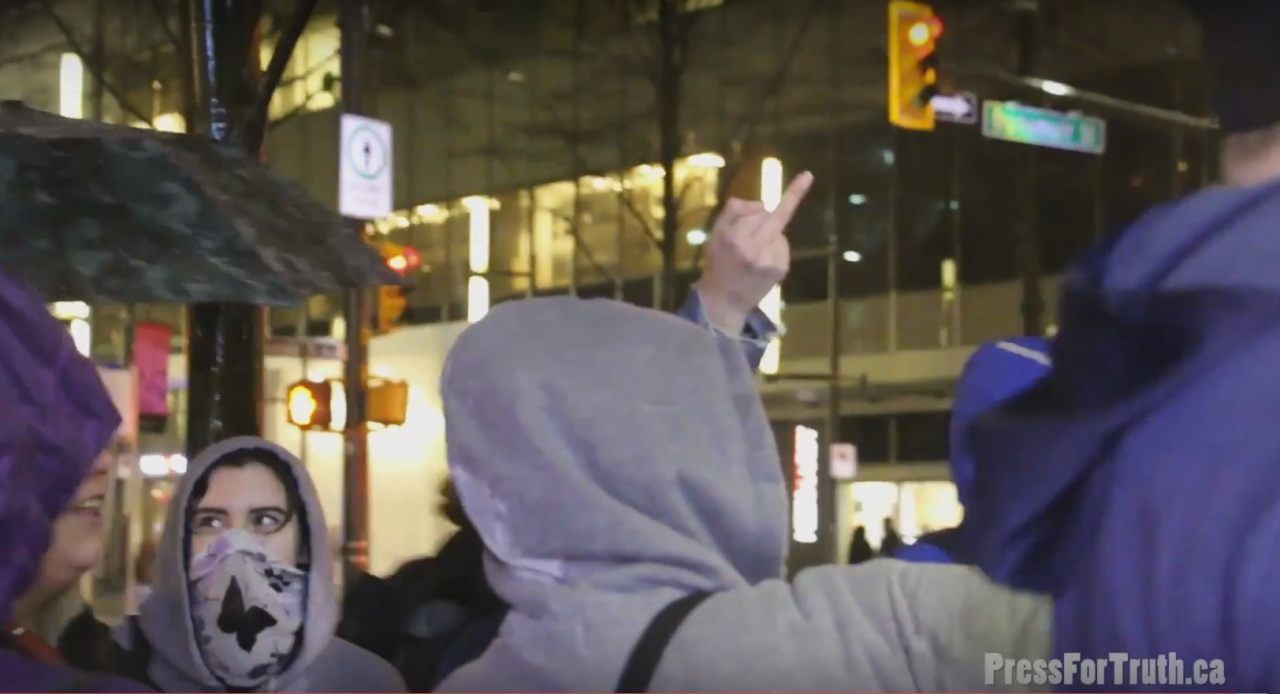 As news of the incident spread on social media, the web’s regressive left demonstrated their famous empathy and tolerance: 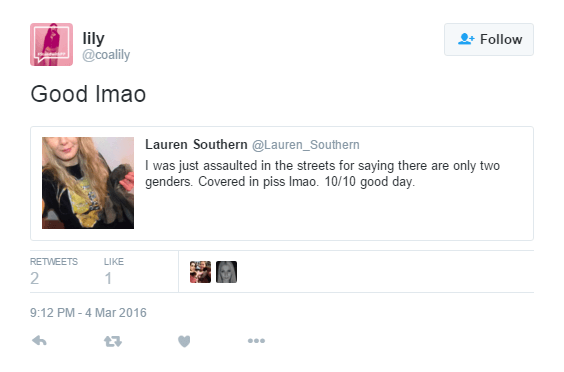 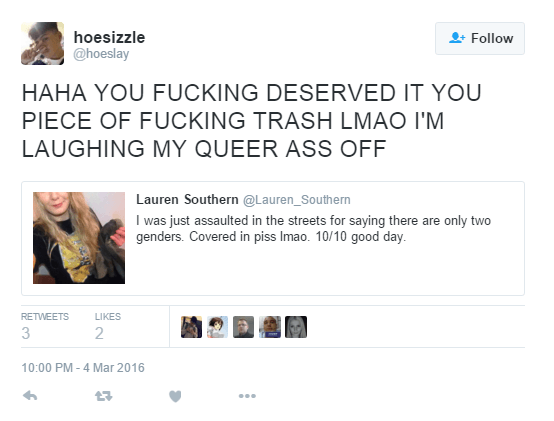 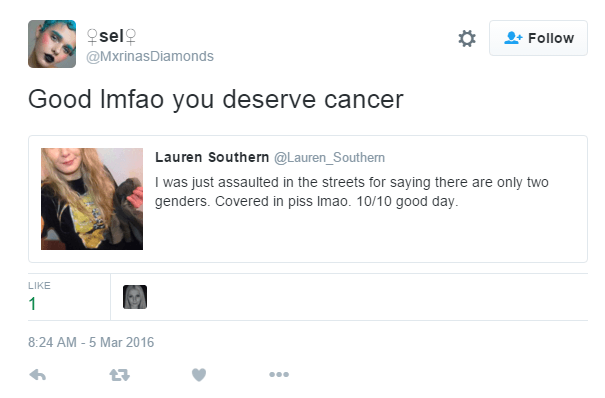 Speaking to Breitbart Tech, Lauren Southern said she didn’t want to be seen as a victim and is still of two minds about pressing charges.

“I could go in and report it to the police. However I honestly don’t know if I want to waste their time,” she said. “I just had a freezing and soaking wet walk home and had to take a shower. I didn’t die. The police have better things to do with their time.”

“I don’t want the two guys who tried to grab [the protester] to get in trouble. She poured it on more than just me and nearly hit this guy in the face with the bottle so two of them went to grab her,” Southern explained. “She wasn’t hurt, but I know how easily men can get blamed for violence, even in situations of self-defence. I want to make sure they will be fine first.”

Her attitude stands in stark contrast to progressive feminists, many of whom are happy to go to the police and even the United Nations over little more than offensive tweets on the internet.

I hope you guys understand that this really isn't THAT bad. I can take showers and ignore tweets. Just exposing regressive nonsense.

Nevertheless, Southern didn’t seek to downplay the hypocrisy or thuggishness of the left-wing protesters.

“The feminist girls all were laughing at me and giving me the middle finger on the street, guys were screaming at me that ‘maybe that washed the scum off you,'” she recounted. “Despite their professed feminism, they don’t care about women if they have the wrong opinions. And despite their professed concern for ‘violence against women,’ they don’t care if women who disagree with them are physically attacked.”

The young libertarian also noted the irony of self-proclaimed anti-fascists trying to shut down political speech with violence.

“You have to see the humour in it. They went to a libertarian event and called everyone fascists, while wearing balaclavas, pouring piss on dissenters, and telling them why they shouldn’t have the right to free speech,” Southern stated. “Great job guys — fascism defeated!”

Still a 20-year old student, Southern already has a reputation as a fearless nemesis of the regressive left. Her debut video explaining why she isn’t a feminist has been viewed over 800,000 times. Later, her protest of a feminist “slutwalk” in Vancouver led to her brief suspension as a candidate of the Libertarian Party of Canada as feminists within the party hierarchy went on the offensive. 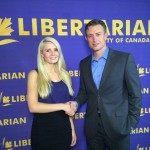 This started a bitter feud between cultural libertarians, who support free speech as well as free markets, and “social justice libertarians” who support a bizarre combination of political correctness and low taxes. Southern’s eventual reinstatement as a candidate, and the resignation of her opponents within the party ,was a major setback to the latter faction’s attempts to co-opt the libertarian movement.

More recently, Southern has been at the forefront of free speech battles in Canada, championing the cause of Gregory Alan Elliott, the Toronto artist who faced a three-year legal battle to avoid jail after he was put on trial for “criminal harassment.” (The alleged “harassment” proved to be little more than tweeted critiques of feminist activism.)

In short, there are many reasons for the regressive left to hate Lauren Southern. The ugly, violent extent of that hatred has now revealed itself.