Fyk also revealed his own personal story of how the social network’s aggressive and hypocritical stance has affected him.

“‘She Ratchet,’ which was a very well known page and around 3.8 million fans, was unpublished by Facebook for ‘bullying,’ which was garbage,” declared Fyk. “No one was bullying anybody.”

“Moreso, it was appealed and rather than getting it back like you normally do, they deleted the page,” he continued. “And one of the things that is appalling to me, is not only do you get a ban… they eliminate the ability to message people. It meant I couldn’t contact my friends or people, which left a stark reminder of how we are way too reliant on Facebook.”

Fyk, who is reported to have previously made around $275,000 a month from running numerous popular Facebook pages before the site’s increase of censorship, claims that several Family Guy fan pages with millions of likes, as well as popular page “Funnier Pics” (which had 3.7 million likes), were all unpublished by the social network without reason. 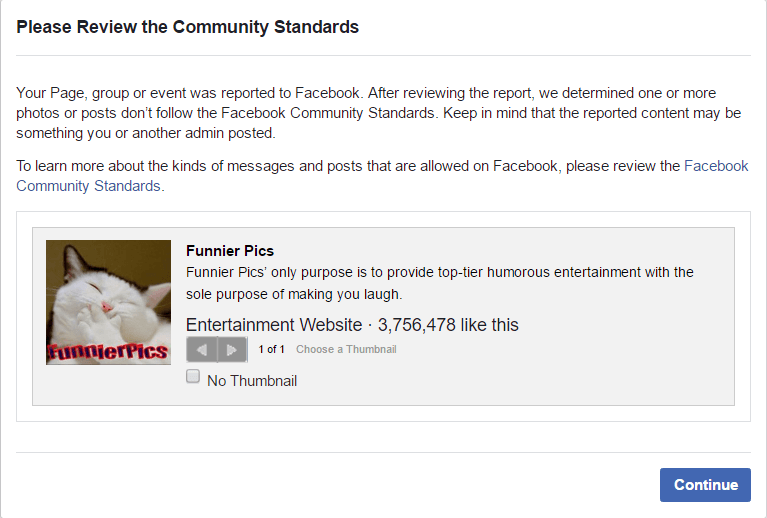 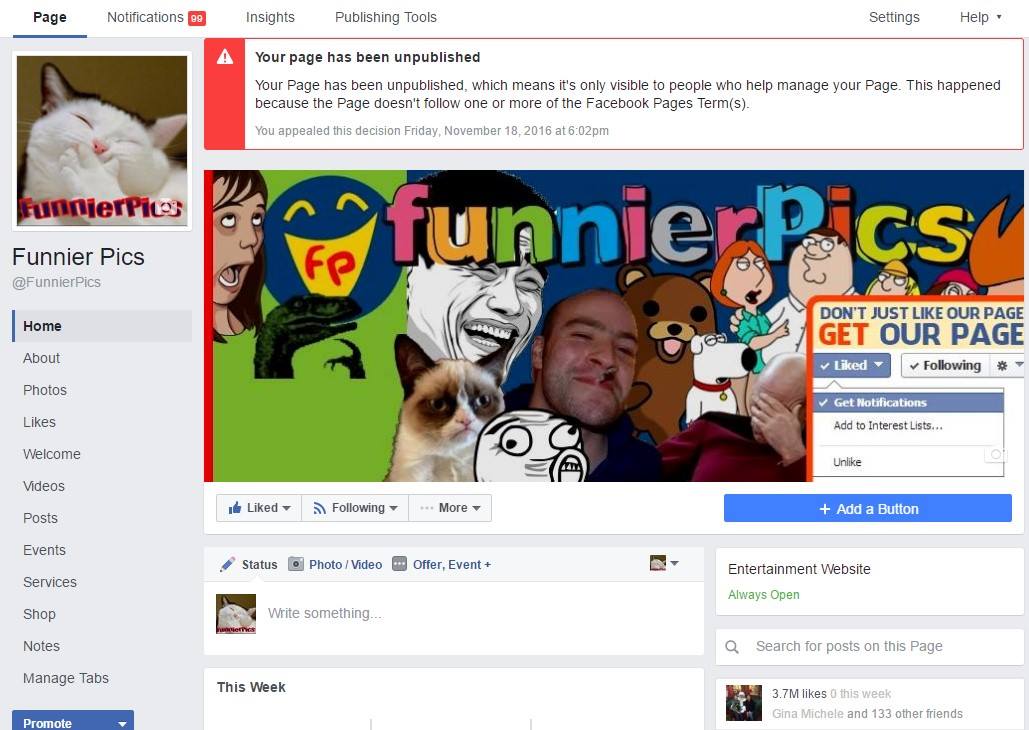 “We’re essentially the foundation of Facebook. The only reason anybody goes on Facebook is because of guys like me, because we’ve entertained millions of people,” Fyk claimed. “WTF Magazine is my main business page. It has 2.5 million fans, and it was crippled by Facebook. Like there had to have been human interaction because we literally lost 99% of our reach overnight. Just gone.”

“Facebook claimed it was because no one wanted to see it. Well then how come we were ranked number five in the world at one point? We were literally above Buzzfeed, Upworthy, everybody, and yet they crippled us,” he continued. “Because they don’t really care about what people want to see. They want to monetize. This is about bottom lines and profit margins. And today, when I look at my newsfeed, one out of every seven posts is a sponsored ad… When does it hit critical mass where people would rather not use any social media than use Facebook?” 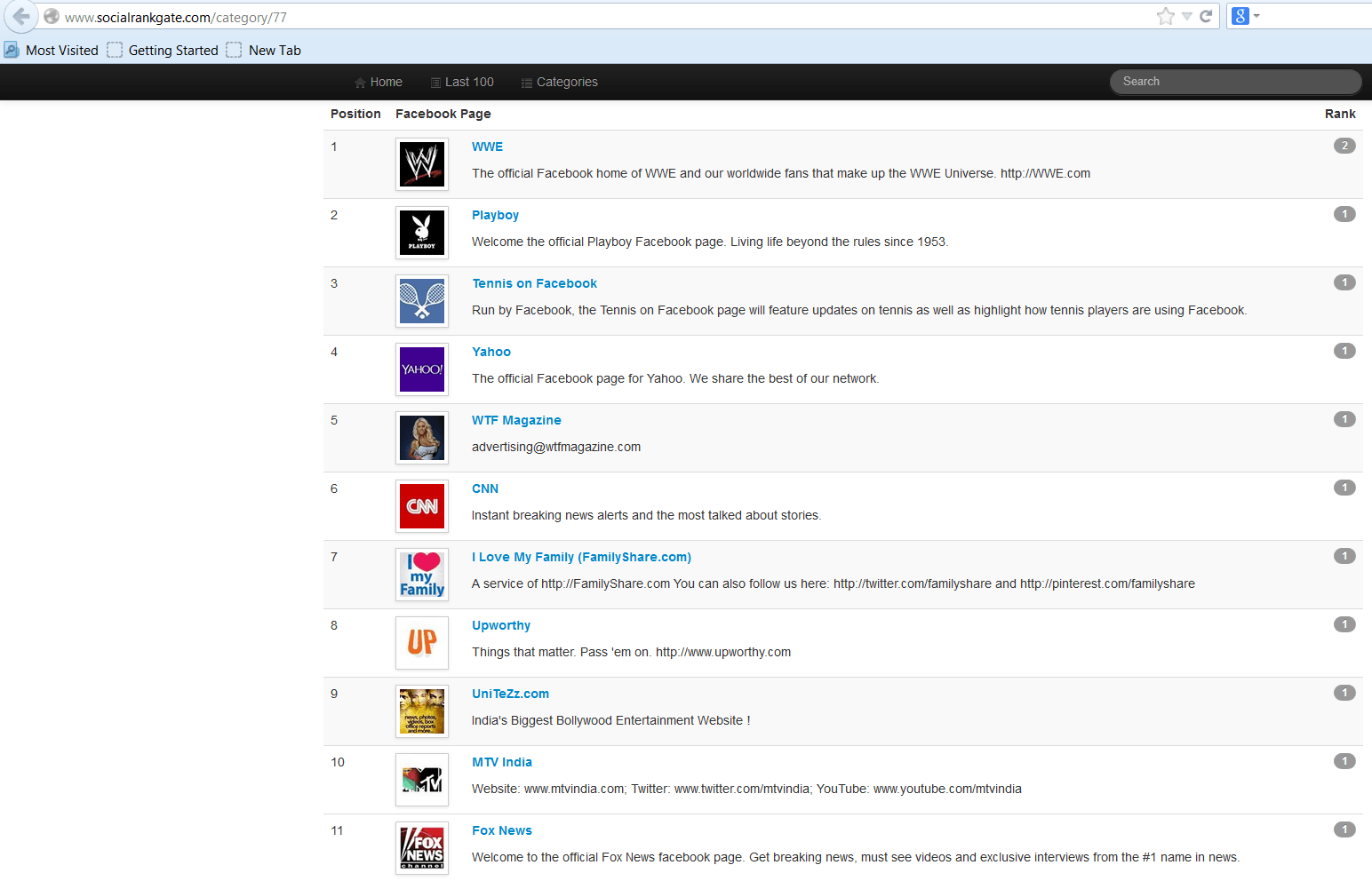 “In my opinion, Facebook should be considered as a monopoly, and someone like Donald Trump coming in as president needs to look at it and go: ‘Do they have too much power?'” concluded Fyk.

After being asked whether Facebook is killing the industry of pages, Fyk replied with a blunt and affirmative “yes.”

“In the heyday, around 2013, I’d make about $4 million a year. I had a fully running operational business, and I believe about eleven employees. So this supported multiple families,” he explained. “I ended up firing several of my employees because I simply couldn’t afford to keep them. The smaller jobs had to go, and they continued to weed it down and weed it down until it was making so little that my team turned out to be two people.”

“$275k a month supported a dozen employees. When Facebook crippled our reach it dropped to $100k a month. Keep in mind we spent 100k in advertising until Facebook decided to disable my ads account,” Fyk recounted. “Then it dropped to 30k though my audience size doubled and I had to let other people go and now it’s close to nothing as Facebook just crushes everything.”

“I had an audience of over 23 million fans and it’s been crippled down to the point where it makes less than ten thousand dollars a month” Fyk continued, adding that he had rarely ever been sanctioned by the platform within the 58,000 posts on his pages until recently. “We weren’t abusing with the system, we adapted with the system. We followed the rules. We didn’t get shut down because we were breaking the rules. We didn’t put pornography out there, we didn’t put abusive stuff up there.”

“We have screenshots of things which were put up on Islamic pages. They have fourteen million views per video and to think that nobody reported it? No, it’s because their entire system is broken,” he claimed. “There’s nothing about it that’s working correctly, and we get banned for things that are a joke. They’re literally a joke. Some of them we don’t even understand, like one of them was a Disney picture that was banned for racism, and it was a Pocahontas Disney screenshot. It was with a quote which was literally said in the movie, and Facebook banned that for racism.”

Comparing Facebook’s tactics to Big Brother from George Orwell’s 1984, Fyk added, “But what are we going to do, go on Facebook and sign a petition against Facebook? It’s a catch-22.”

“Let people be, even if it is to insult somebody, because last time I checked ‘hate speech’ is still free speech,” he continued.

“Facebook is so concerned about sexuality and less concerned about violence,” explained Fyk. “Now I have an eight-year-old son. I would rather my son watch two people having sex, with is a natural, positive act, than somebody being beaten up, or having their head cut off. The things I see on Facebook nowadays that they allow, and that I report only to be told that they’re allowed on Facebook, and they’re concerned about side-boob. Something’s wrong, it’s backwards.”

Fyk claimed that he was sanctioned on Facebook for posting a “side-boob” picture of Family Guy’s animated star Peter Griffin.

“I’m not even kidding you, it was hit for nudity,” claimed Fyk, adding that the picture was a screenshot from the episode where Griffin sings Kelis’ “Milkshake” song while holding his man-boobs.

“I used to go on Facebook for about 4 to 5 hours a day, and now I only go on it because I have to for work,” he stated.

“Facebook literally saved my life. I wouldn’t be where I am right now in life and for that I thank Mark Zuckerberg directly, but don’t take away freedom of thought and expression,” Fyk said. “Facebook has become something far more than just a business. People’s lives are effected by it. It supports single parents and gives some people outlets to express who they are. You’re hurting family’s both those that post and those that view our content. Please reconsider your stance on content because Facebook is important to all of us.”

Editor’s note: This story has been updated to correct quotes from Fyk.