Actor Steve Martin has come under fire following a tweet he posted commemorating the death of his friend, actress Carrie Fisher.

Martin posted a tweet on Tuesday which read, “When I was a young man, Carrie Fisher was the most beautiful creature I had ever seen. She turned out to be witty and bright as well.” 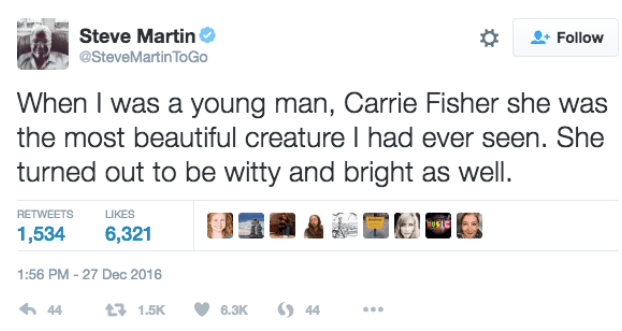 Martin has since deleted the tweet following backlash from Twitter users who accused the tweet of being somehow sexist. New York magazine even dedicated an entire article to attacking those that found Fisher attractive as “Nerd-boys.”

I think she aspired to something higher than just being https://t.co/R5qxdhADzj do you want to be remembered?

Others jumped to Martin’s defense providing support for his tweet,

If you were upset by Steve Martin’s tweet about Carrie Fisher, congratulations! You are officially addicted to outrage.