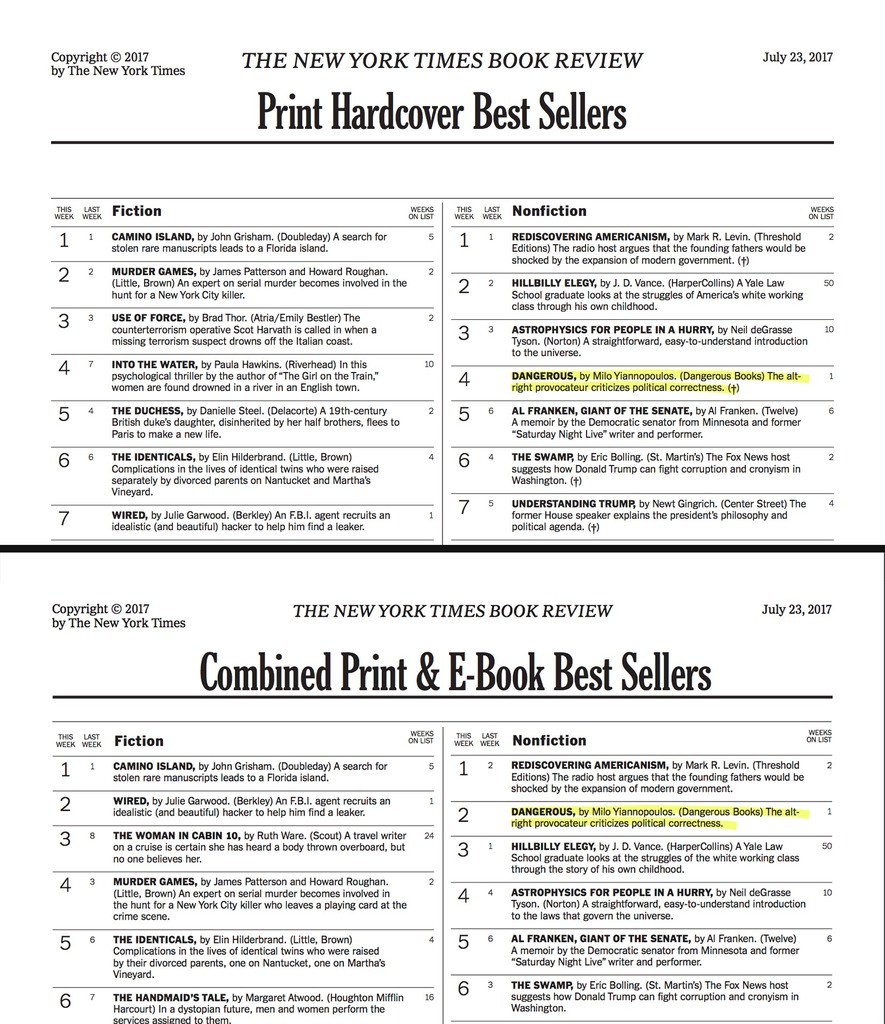 Following the release of Dangerous, several news outlets attempted to undermine its success, including The Guardian, Publishers Weekly, and Salon.

In their reports, left-wing news outlets reported that despite Milo’s claim he had sold over 100,000 copies of Dangerous, the number was more realistically close to less than 20,000.

Milo responded to these allegations in an exclusive comment to Breitbart Tech.

“Wait, you mean the people this book is dedicated to exposing are trying to downplay its success? Amazing!” said Milo in an email to Breitbart Tech. “Mendacious and selective reporting like this is one of the reasons I wrote the book in the first place. I deal with precisely this kind of fake news in chapter six — yet another reason to buy the book, so you can spot this stuff when they do it to others.”

“Allow me to set the record straight. We can only ship out the books that are ordered and unfortunately both on- and offline retailers vastly underestimated demand for DANGEROUS,” he continued. “We are printing tens of thousands of new copies a week and shipping them as fast as we can. I can tell you that our entire first print run of 105,000 copies is completely exhausted.”

“DANGEROUS is also unusual because we have a very unusually high number of direct sales. When we advertised on highly trafficked websites such as Breitbart, we provided direct sales links for the ads. Because they make us more money!” Milo explained. “If these reporters care so much about BookScan numbers, which don’t capture even close to the total sales numbers, why aren’t they pointing out that according to BookScan I ought to have placed #2 in hardcover nonfiction in the New York Times Best Seller list, not #4? Maybe someone should ask them… DANGEROUS has hit the Best Seller lists against all the odds, and it will stay there for a long time — whether social justice warriors in the media like it or not.”

When asked if having his own publishing company helped or hurt the success of Dangerous, Milo said: “Simon and Schuster is going to have to pay for breaching our contract. But at least I no longer have a geriatric publisher dictating my marketing strategy or taking out all the best jokes. And the profit margins per copy are pretty sweet.”

“I’m looking forward to expanding Dangerous Books beyond my own byline to every dissident blockbuster author in the western world,” he declared.