Following the circulation of an internal memo criticizing Google’s restrictive PC workplace environment, employees have freaked out, calling for the memo’s author to be fired.

A software engineer at Google published a ten-page memo where he criticized “Google’s Ideological Echo Chamber,” resulting in controversy amongst employees within the Google+ internal social network. The author argues within the memo that women are underrepresented in tech fields not because of discrimination, but because of inherent psychological differences between men and women, echoing a similar argument made by former Breitbart senior editor Milo Yiannopoulos in 2016. When discussing Google’s educational guidelines for young women, the memo’s author writes, “We need to stop assuming that gender gaps imply sexism.”

The allegations of political intolerance come shortly after YouTube, a Google-owned platform, announced it would manipulate search results, artificially promote socially progressive videos, and censor non-rulebreaking content that is considered “potential hate speech.” The company is also partnering with the ADL and other left-wing organizations to identify “hate speech” on the platform.

In the document, the author accused Google of shunning intellectual diversity, saying:

I value diversity and inclusion, am not denying that sexism exists, and don’t endorse using stereotypes. When addressing the gap in representation in the population, we need to look at population level differences in distributions. If we can’t have an honest discussion about this, then we can never truly solve the problem. Psychological safety is built on mutual respect and acceptance, but unfortunately our culture of shaming and misrepresentation is disrespectful and unaccepting of anyone outside its echo chamber.

The author writes that he is not the only employee at Google who has noticed the restrictive culture in the workplace:

Despite what the public response seems to have been, I’ve gotten many personal messages from fellow Googlers expressing their gratitude for bringing up these very important issues which they agree with but would never have the courage to say or defend because of our shaming culture and the possibility of being fired. This needs to change.

Later in the document, the author discusses the possible reasoning behind gender bias in the tech field:

At Google, we’re regularly told that implicit (unconscious) and explicit biases are holding women back in tech and leadership. Of course, men and women experience bias, tech, and the workplace differently and we should be cognizant of this, but it’s far from the whole story.

On average, men and women biologically differ in many ways. These differences aren’t just socially constructed because:

Shortly after the publication of the document, which can be read in full on Gizmodo, Google’s Vice President of Diversity, Integrity, and Governance Danielle Brown issued a statement on the memo:

I’m Danielle, Google’s brand new VP of Diversity, Integrity & Governance. I started just a couple of weeks ago, and I had hoped to take another week or so to get the lay of the land before introducing myself to you all. But given the heated debate we’ve seen over the past few days, I feel compelled to say a few words.

Many of you have read an internal document shared by someone in our engineering organization, expressing views on the natural abilities and characteristics of different genders, as well as whether one can speak freely of these things at Google. And like many of you, I found that it advanced incorrect assumptions about gender. I’m not going to link to it here as it’s not a viewpoint that I or this company endorses, promotes or encourages.

Diversity and inclusion are a fundamental part of our values and the culture we continue to cultivate. We are unequivocal in our belief that diversity and inclusion are critical to our success as a company, and we’ll continue to stand for that and be committed to it for the long haul. As Ari Balogh said in his internal G+ post, “Building an open, inclusive environment is core to who we are, and the right thing to do. ‘Nuff said. “

Google has taken a strong stand on this issue, by releasing its demographic data and creating a company wide OKR on diversity and inclusion. Strong stands elicit strong reactions. Changing a culture is hard, and it’s often uncomfortable. But I firmly believe Google is doing the right thing, and that’s why I took this job.

Part of building an open, inclusive environment means fostering a culture in which those with alternative views, including different political views, feel safe sharing their opinions. But that discourse needs to work alongside the principles of equal employment found in our Code of Conduct, policies, and anti-discrimination laws.

I’ve been in the industry for a long time, and I can tell you that I’ve never worked at a company that has so many platforms for employees to express themselves—TGIF, Memegen, internal G+, thousands of discussion groups. I know this conversation doesn’t end with my email today. I look forward to continuing to hear your thoughts as I settle in and meet with Googlers across the company.

According to leaked documents from Google’s internal employee messaging platform, many Googlers were not happy with the memo and responded with anger towards the author and Google for not reacting to the memo in a stronger manner: 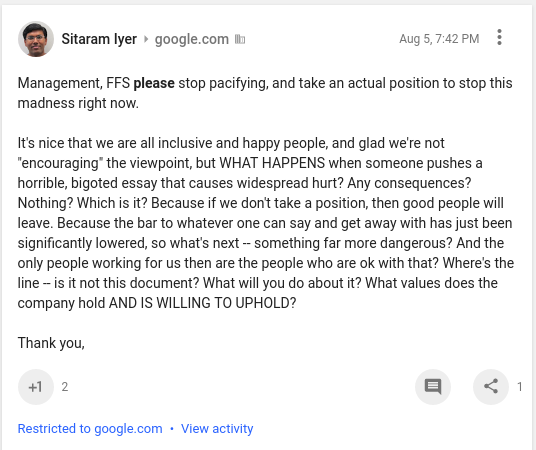 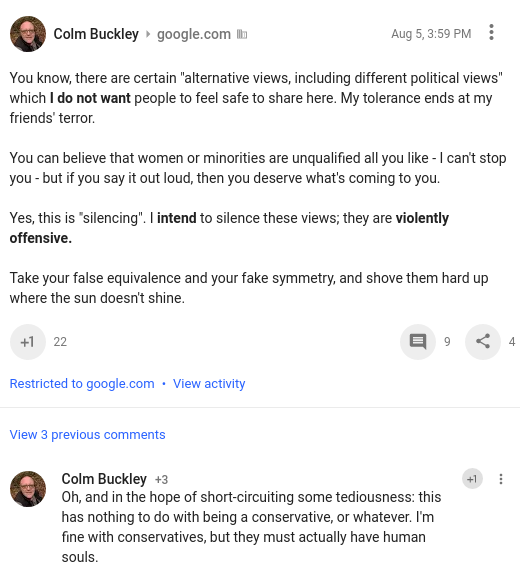 Some even implied that the author of the memo is a Nazi: 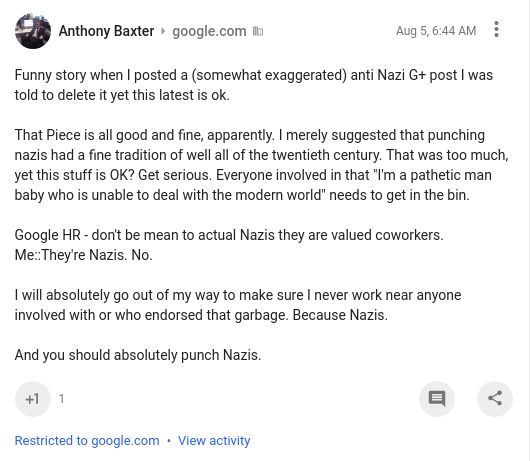 An anonymous survey shows that somewhere between 30 to 40 percent of employees at Google are tired of the company’s restrictive ideological environment, while a second question shows more than half of the survey respondents disagreed with the statement that “the document is harmful and shouldn’t have been shared”: 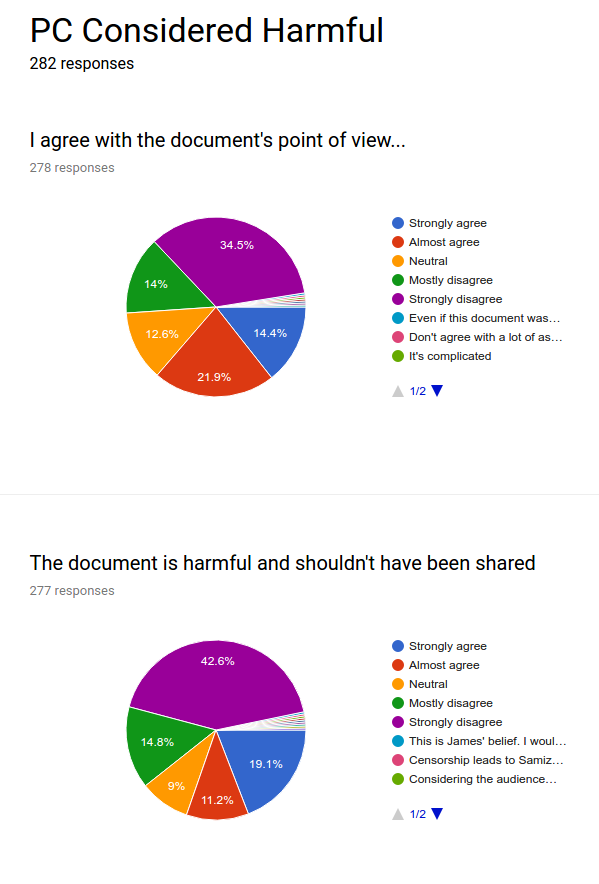 Google had not replied to a request for comment from Breitbart Tech at the time this story was published.