Editor’s Note — This op-ed was originally submitted to the Daily Californian, the student newspaper of UC Berkeley, by Berkeley student and Vice President of the Berkeley College Republicans Naweed Tahmas. When contacted by Breitbart News to determine why the Daily Californian refused to publish Tahmas’ op-ed, the Editor-in-Chief sent a link to the paper’s op-ed guidelines, which state that they reserve the right to not publish “libelous, racist, sexist, homophobic or highly offensive” content.

Support for “undocumented immigrants” is a quasi-religion here at UC Berkeley.

Students regularly protest on behalf of “Dreamers,” and our school has an entire department of its bureaucracy, the Undocumented Student Program, dedicated to aiding students who were brought to the United States illegally. For many in the Cal community, it is difficult to imagine why anyone would not support granting citizenship to undocumented students.

In this piece I will argue that it is in fact a perfectly reasonably position to be wary of immigration, and one which many extremely sensible people have taken.

To understand immigration, we have to first understand why it matters. To do this, we must familiarize ourselves with the basic philosophy behind the nation-state.

The Oxford English Dictionary defines a nation as “a large aggregate of people united by common descent, history, culture, or language, inhabiting a particular country or territory.” The campus left, it appears, would remove everything but the last six words of this definition.

Many of our Founding Fathers were extremely wary about immigrants who did not share their values coming to the United States. Hamilton on Broadway might be best-known for such zingers as “Immigrants… we get the job done!” but if the campus left knew Alexander Hamilton’s real views on immigration, they might not be so quick to sing his praises.

In 1802 Hamilton wrote that, “The safety of a republic depends essentially on the energy of a common national sentiment; on a uniformity of principles and habits.

“Foreigners,” Hamilton believed, “will generally be apt to bring with them attachments to the persons they have left behind; to the country of their nativity, and to its particular customs and manners,” and that this “has often been likely to compromise the interests of our own country in favor of another.”

Hamilton considered this dangerous because “In times of great public danger there is always a numerous body of men, of whom there may be just grounds of distrust; the suspicion alone weakens the strength of the nation, but their force may be actually employed in assisting an invader.”

In other words, immigrants have the power to subvert a nation to the interests of their own home country. Do you doubt it? Just look at how often certain Hispanic student groups wave the Mexican flag on our campus. 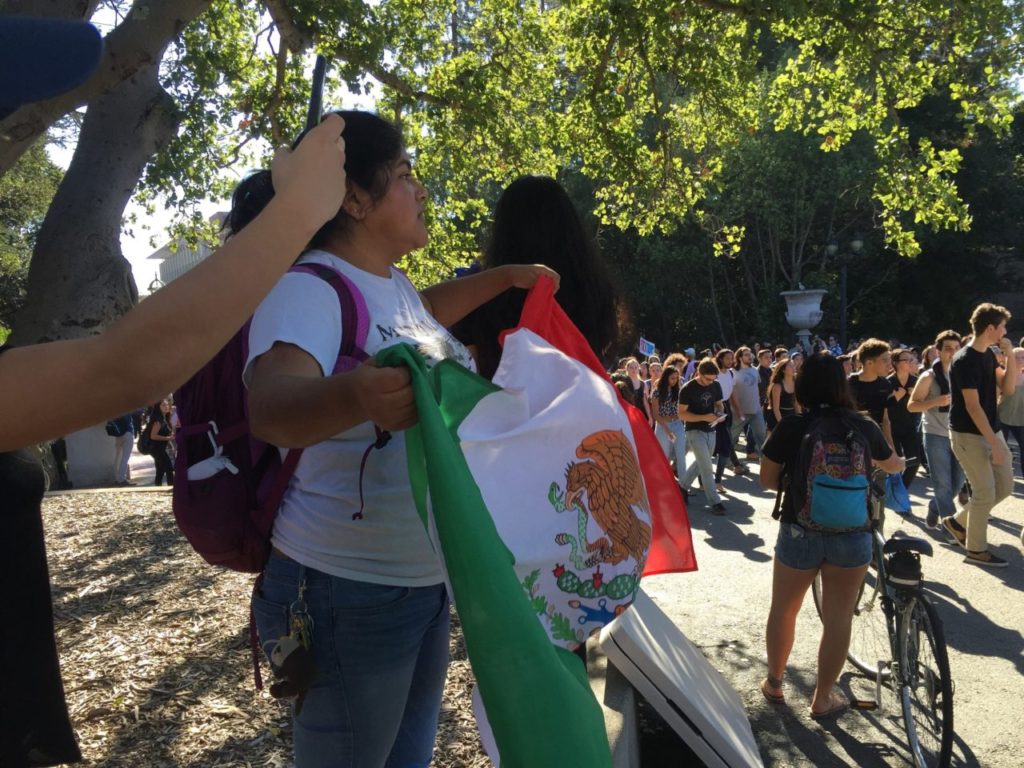 Hamilton’s political rival, Thomas Jefferson, shared Hamilton’s concerns about immigration. Jefferson wrote in “Notes on the State of Virginia” that immigrants “will bring with them the principles of the governments they leave, imbibed in their early youth… In proportion to their numbers, they will share with us the legislation.

Jefferson went on to ask, “Suppose 20 millions of republican Americans thrown all of a sudden into France, what would be the condition of that kingdom? If it would be more turbulent, less happy, less strong, we may believe that the addition of half a million of foreigners to our present numbers would produce a similar effect here.”

Jefferson loved France; he was certainly not “racist” towards the French. But he recognized that even two populations as ethnically similar as the French and Americans would have difficulty mingling without conflict.

Even Benjamin Franklin expressed concerns about large numbers of German immigrants settling in the colonies and failing to assimilate to English culture and values.

Nor were his concerns unfounded. They are backed up by modern social science, including the research of Robert Putnam, which shows that increased ethnic diversity has detrimental effects on social trust.

Does this mean that immigrants have no place in the United States? Hardly. In the long term, the Germans did assimilate, as did many other immigrant groups.

But this was not an easy process, and immigration must be carefully controlled in order to preserve and safeguard our country’s basic cultural norms. To further this end, our government should rigorously enforce our immigration laws. Indeed, as President Clinton once said, “We are a nation of laws.” We cannot provide special exemptions to law breakers for this would corrode our legal system.

We are fortunate to live in the United States, and we should do everything we can to prevent the sort of poverty and violence characteristic of most of the world outside the West from being transplanted here.

Thus America must commit itself to being a nation of laws, no matter how sympathetic some individual stories may be.

The typical Cal student would likely support ending racial bias in our law enforcement system, on the basis of equality. This is a noble aim, and I do not see why any other law, including our immigration laws, should not be executed with the same level of evenhandedness.

The left may point to Emma Lazarus’ poem “The New Colossus,” inscribed on the base of the Statue of Liberty, as their strongest emotional argument for immigration, but it is worth mentioning that poem was tacked onto the statue 17 years after it was built in order to co-opt its original meaning and essentially turn it into a pro-immigration propaganda piece.

It is also worth mentioning that the counterpart to Liberty, in our Pledge of Allegiance, is Justice, and there is a reason why Lady Justice wears a blindfold.

Some may say that undocumented students share our values. If they do, then they should have no problem demonstrating their commitment to respecting American rule of law by following our nation’s legal immigration process, as millions of others before them have done.

Naweed Tahmas is a senior studying Political Science at the University of California, Berkeley, and is the Vice President of the UC Berkeley College Republicans.