Twitter has reportedly begun automatically locking accounts that change their display name to that of famous people such as Elon Musk and Jeff Bezos.

Gizmodo reports that Twitter has begun automatically locking any accounts that change their display name to that of famous entrepreneurs such as Elon Musk and Jeff Bezos. This lock is based on a display name change only, not additionally changing the twitter account address (‘@ name’) to mimic Musk or select other individuals.

This change is reportedly in an effort to crack down on cryptocurrency manipulation on the platform. Many of these accounts initially act as someone such as Musk would on the platform before suddenly derailing the conversation into a discussion about a new cryptocurrency which they are giving away for free. Elon Musk himself has even commented on the fake accounts:

I want to know who is running the Etherium scambots! Mad skillz …

Twitter is now attempting to crack down on these scams by automatically locking accounts attempting to change their display name and forcing them to verify their identity. If a user attempts to change their display name, they are locked out of their account and must pass a Google reCAPTCHA test and verify their phone number to access their account. 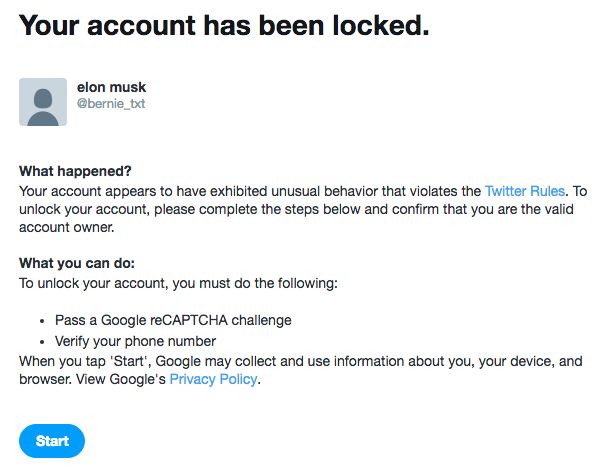 It appears that Twitter is either just beginning to roll out the system, or has identified the most commonly impersonated names as they are only locking accounts that attempt to display themselves as particular CEO’s or VIPs. Changing an account display name to “Larry Page,” “Donald Trump,” or “Ajit Pai,” does not result in an account lock.

VICE News admitted that Twitter’s shadowbanning of conservatives from the site’s search feature is causing confusion because the user’s actual account cannot be located, only imposters, scammers, and parody accounts.

A Twitter spokesperson told The Verge: “As part of our commitment to serve the public conversation, we’re continuing to fight spam and other malicious behaviors on our service. As such, we’re rapidly developing our response to be more agile and effective in detecting these behaviors and enforcing our policies—particularly as it relates to deceptive cryptocurrency accounts in violation of our spam rules.”