The university advertises these programs as part of the BWell Health Promotion, as a health service initiative on their website. The Ivy League university claims that “unlearning toxic masculinity” will be beneficial not only for men, but for society as a whole. 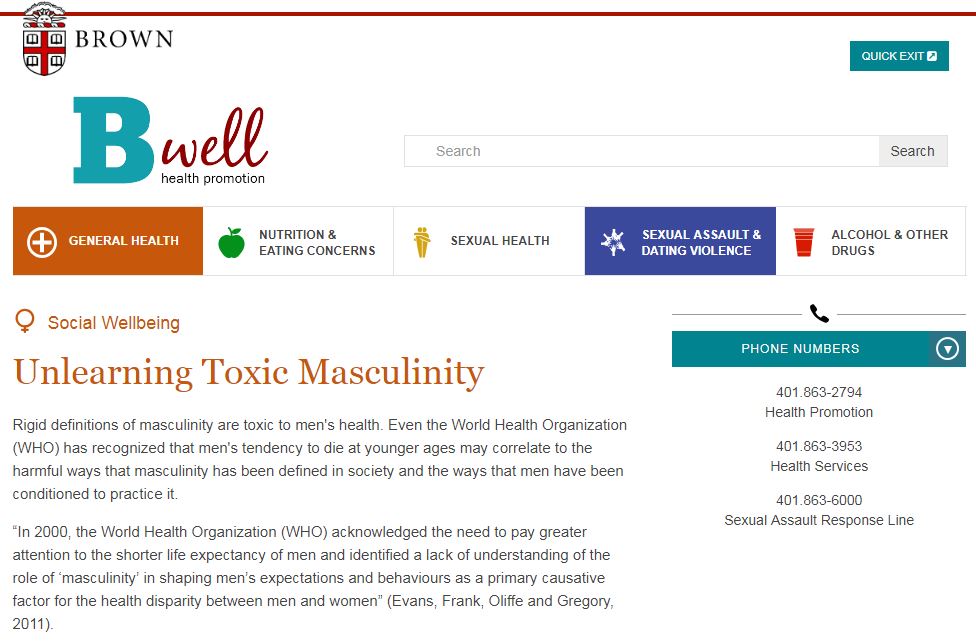 Brown claims that society’s definition of masculinity may be “toxic to men’s health,” causing them to “die at younger ages,” adding that the way in which men have been socialized also “plays into the type of violence that exists in college communities.”

Men will often resort to violence to resolve conflict because anger is the only emotion that they have been socialized to express. Unfortunately, the way that young men are conditioned to view sex and their need to be dominant and have power over others also contribute to instances of sexual assault and other forms of interpersonal violence on college campuses.

Brown’s goal is to create a “safe space” for male students to “unpack all of the things they have learned about masculinity and what it means to be a man,” and to help those socialized as men to unlearn some of the notions that have led to such profound harm being enacted toward others and toward themselves.”

The university is currently offering two programs for unlearning society’s definitions of masculinity. One is titled, “Masculinity 101- a weekly discussion group for students to unpack and unlearn toxic masculine norms.” The other is called “Conversations on Masculinity” and provides a video compilation featuring male students speaking on the topic of toxic masculinity.

One student interviewed claims that he was told Brown University would be a “liberal bastion,” but to his dismay, discovered it is not, because he sees masculinity everywhere he goes.

“At Brown, it’s strange, because we’re told coming here that this is such a liberal bastion, and that you’re never going to have to prove your masculinity, and that it’s so gender neutral, and everything is fine, but it’s not true, because I think society is so pervasive, that no matter where you go, it’s going to be there.”

Another student said that frat culture, drinking in excess, and asserting dominance are all evidence of “unhealthy toxic masculinity,” adding that such masculinity is visible in “everyday things” such as “walking down the street,” and feeling as though he is expected to move if he sees a “white male” in front of him.

“I know there’s men at Brown that, like, essentially use their title as a feminist or someone that is, like, aware, in order to, like, seduce women,” said a third student.