The Facebook and Google approved fact-checking service Snopes has once again made a serious error when weighing the factuality of a recent popular meme, claiming the “general idea” of the meme was “correct,” despite it having been debunked.

A new meme has been making the rounds across social media recently, featuring a photo of President Donald Trump alongside a group of Republican lawmakers and other members of his administration. The photo was taken following the House’s vote to repeal Obamacare in 2017, and in the meme, a red X has been placed over the faces of 33 individuals. The caption of the photo reads: “Everyone with an X has since been voted out of Congress.” 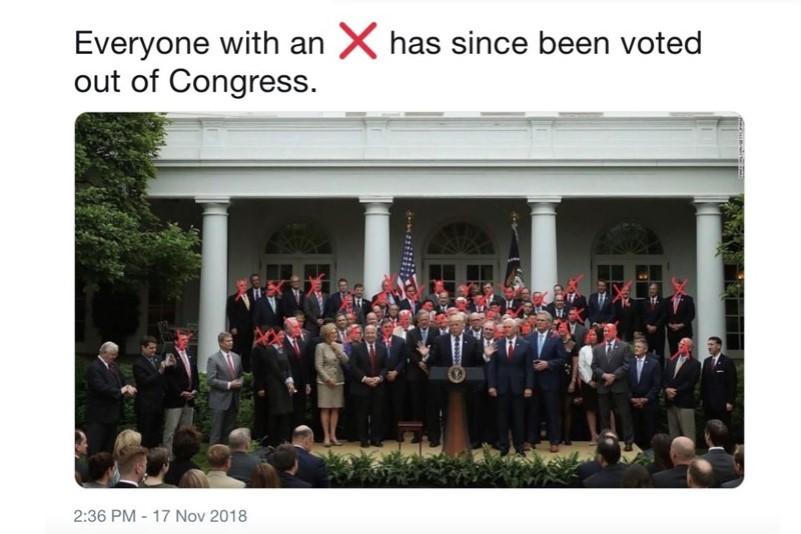 This, of course, is incorrect and has now been debunked by many across social media — but the popular fact-checking website Snopes has stated that the “general idea” of the meme was “correct.” The meme came to the attention of multiple high-profile Twitter users after being retweeted by former Hillary Clinton campaign staffer Nicholas Kitchel.

Business Insider reporter Joe Perticone pointed out that despite having a red X placed over her face indicated that she had been voted out of Congress, Seema Verma never actually served in Congress:

Lol at this dumb viral tweet full of inaccuracies. Aside from the many other wrong ones, he has an ‘X’ over Seema Verma’s face. She’s never even served in Congress 🏻‍♂️ https://t.co/mPXIbI4rj1

Politico reporter Jake Sherman tore apart the meme stating that it was “insane fake news” and was in fact “more incorrect than correct.”

This is quite literally insane fake news.

Amazing. This photo illustration — posted by @nicholaskitchel — is actually more incorrect than correct.

While a number of GOP Members of Congress who voted to repeal the Affordable Care Act are crossed out in this image, it has been pointed out that there are several errors, so I have taken it down. pic.twitter.com/QC5Di5ZUfY

Three weeks later, Snopes fact-checker Bethania Palma fact-checked the meme and decided that it was accurate — despite being proven to be wildly inaccurate by this point. Palma stated that it was “true” that “The Congressional seats of almost three dozen Republicans who voted to repeal Obamacare were lost to Democrats in 2018,” which is not the claim made in the meme.

Palma states in the fact-checking article: “In the meme, red ‘X’ marks were drawn through the faces of 33 lawmakers who purportedly were rejected by voters in the 6 November 2018 midterm elections,” but fails to note that not everyone in the photo was a lawmaker, and many lawmakers that were crossed out in the photo actually won re-election.

Palma inaccurately states: “Although memes are frequently grossly inaccurate, this one got the general idea correct. By our count, at least 34 Republican legislators who voted to repeal or partially repeal Obamacare will not be returning to Congress when the new session begins in January 2019.” The meme did not claim that 34 Republican legislators who voted to repeal Obamacare would not be returning to Congress, it claimed that “Everyone with an X has since been voted out of Congress,” which is demonstrably false.

Speaking to The Daily Caller, Snope co-founder David Mikkelson defended the websites fact-check stating: “The overall point offered by the meme in question is that some 33 Republican members of Congress who voted to repeal the ACA lost their seats. And as our fact check documents, that point is correct.” Mikkelson continued: “The meme isn’t really about the specific persons who appear in the accompanying photograph, as they weren’t identified by name and are largely unrecognizable to viewers as shown due to the small size of the photograph and the fact that their heads are obscured with red X’s.” Mikkelson stated: “Our audience is intelligent enough to understand the difference between a literal representation and a symbolic one.”

Snopes has a long history of leftist bias, and the fact-checker of this meme, Bethania Palma, has even contacted Breitbart News directly in the past to ask a number of odd questions about factually accurate articles. Breitbart News Editor Matthew Boyle published his correspondence with Palma recently after receiving an email relating to an article about the Black Panther organization campaigning for Democrat gubernatorial candidate Stacey Abrams in Georgia.

Boyle writes in his article:

The story went viral. Many other national outlets and outlets across Georgia, including a local CBS News affiliate, picked it up and carried the damning images of Abrams’ radical supporters. Since then, President Donald Trump held a rally in Macon, Georgia, for Kemp and the latest polls in the race show Kemp leading Abrams by as many as 12 points.

On Monday, a self-identified “reporter” for Snopes, Bethania Palma, reached out to Breitbart News with a series of questions about the Black Panther report. None of the questions implies anything was inaccurate about the report Facebook relies on Snopes as an official “fact checker” to detect fake news and misinformation on the platform, along with a small group of other primarily left-wing organizations including Politifact.

In her email, Palma asked a number of questions about the story stating:

The story says Breitbart “obtained” images of the Black Panthers. Where did Breitbart obtain the images from?
– Why does Breitbart quote the Kemp campaign with no obvious effort to get comment from the Abrams campaign?
– Why did Breitbart use the term “lobby” in the headline?
– Breitbart normally takes a pro-gun stance. Does Breitbart maintain that stance when the gun owners are black?
– Did anyone at Breitbart make an effort to contact the New Black Panther Party for comment?

In the article, Boyle gives a brief background on Palma and her “fact-checking” credentials, stating:

Just a quick glance at Palma’s Twitter account or at her history of writing for radical leftist outlet Alternet shows a hard leftist mentality, one quick to accuse Trump of being “racist” (the latest is a series of tweets attacking the president’s campaign ad on the migrant caravan as such) or linking Trump to the Ku Klux Klan any way she can–a history dating back years, as Breitbart News has reported about Palma before.

Breitbart News responded to Palma’s questions with a number of our own, asking:

1.) Why can anyone trust Snopes to be an independent authority on fact-checking when you personally are so clearly biased in favor of leftists?
2.) You implied in your questions to us that our story had something to do with race. The story clearly did not. What made you think that? Please be specific.
3.) In your questions to us, you did not indicate that there was anything even close to inaccurate in our story. So, again, please be specific: what exactly are you “fact checking”?
4.) Do you send similar lists of questions to outlets like the New York Times, Washington Post, CNN, and others on their reporting?

Palma did not respond to Breitbart News’ questions.