Gavin McInnes, a founder of Vice magazine and the right-wing group the Proud Boys, has been banned from YouTube for “copyright infringement.”

The Verge reports that Gavin Mcinnes, one of the founders of the digital media outlet VICE magazine and the founder of the Proud Boys, a right-wing men’s group, has been suspended from YouTube. McInnes has been banned from Facebook, Instagram, Twitter, Paypal and now YouTube, with many citing the FBI’s accidental labeling of the Proud Boys as an extremist group for their decision to remove him from their platforms. The FBI has since stated that the extremist label was a misunderstanding.

YouTube stated that they chose to remove McInnes from their platform because his channel exceeded the threshold for copyright strikes, as a result, McInnes was deemed a “repeat offender” and banned from the platform. An email from YouTube to McInnes states:

Please understand that YouTube’s copyright removal process complies with the law. We strive to be fair to our users and protect their freedom of expression while also respecting the legal rights of copyright owners.

Speaking to the Verge, YouTube explained their ban stating: “When a copyright holder notifies us of a video that infringes on their copyright, we act quickly to remove content as is required of us by law. We terminate the accounts of repeat offenders.”

But in an email to McInnes, YouTube stated that he can “resolve the issue directly with the claimant,” who happens to be the skate shoe manufacturer, Vans Inc. So McInnes did exactly that, reaching out to the Vans brand representative who told McInnes that they had contacted YouTube and asked them to reinstate his videos.

The email from the Van brand representative states: “We apologize for any inconvenience this has caused you. Please let us know if your content is not back up within the next 24-48 hours.” A screenshot of the email can be seen below: 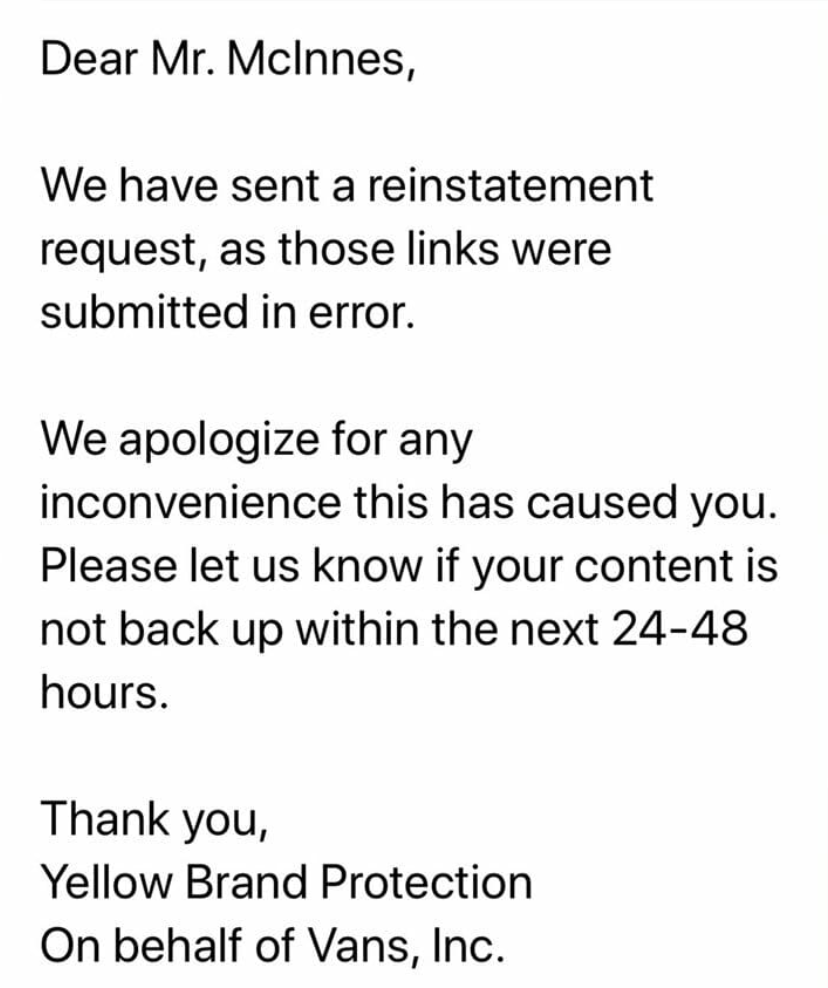 Speaking to the Gateway Pundit, McInnes stated: “YouTube was the last place I had to defend myself. It’s all part of a concerted effort to completely deplatform me.” McInnes was also recently fired from CRTV, where he hosted his own show, after the media network merged with The Blaze Media.

As of the time of the writing of this article, McInnes’ content had still not been reinstated on the YouTube platform.