President Donald Trump serving fast food — including Burger King, Domino’s, Wendy’s, and McDonald’s — to the Clemson college football team while hosting them at the White House inspired widespread meme support across Reddit’s The Donald discussion board.

One meme took aim at Gillette’s latest ad decrying “toxic masculinity,” mocking the commercial’s derision of the phrase, “boys will be boys”: 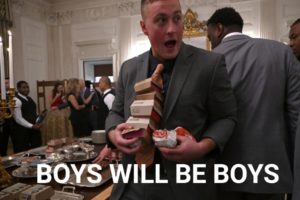 Another meme draws on the “He Protec but He Also Attac” meme with a rhyme: 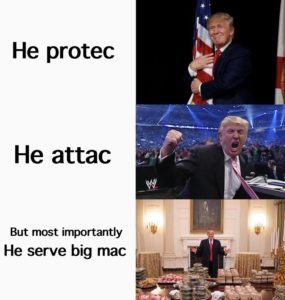 Trump tweeted on Tuesday that he served “over 1000 hamberders” — he later deleted the tweet and republished a similar message — a typo memetically memorialized: 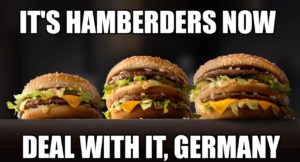 An iconic image from the video of a woman screaming at the sky during Trump’s inauguration was superimposed over the White House portrait of Abraham Lincoln: 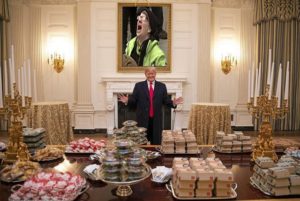 A Trump meme drawing on the Mafia City mobile game meme was composed, depicting the president’s evolution from a “LEVEL 1 CROOK” to a “LEVEL 35 BOSS:”

One Redditor celebrated the new version of the classic “Surf and Turf” meal: 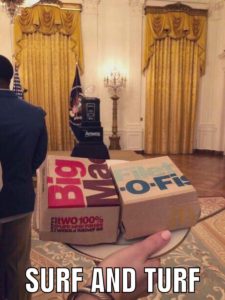 Another memester thinks he discovered the deal leading to the White House feast: 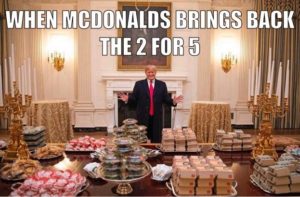 President Trump said of the event, “We ordered American fast food, paid for by me. Lots of hamburgers, lots of pizza. We have some very large people that like eating, so I think we’re going to have a little fun.”

Great being with the National Champion Clemson Tigers last night at the White House. Because of the Shutdown I served them massive amounts of Fast Food (I paid), over 1000 hamburgers etc. Within one hour, it was all gone. Great guys and big eaters!

Clemson’s quarterback Trevor Laurence told TMZ, ” It was awesome. We had McDonald’s and everything. It was good!”