Instagram users are allegedly being prevented from liking or following President Trump and his son, Donald Trump Jr., according to multiple reports received by Trump Jr., who exclusively shared those reports with Breitbart News.

The Instagram users have reported multiple issues on the platform. These include having their accounts automatically unfollow President Trump and Donald Trump Jr. without their knowledge or consent, and being prevented from liking posts from President Trump, Donald Trump Jr., and other conservative accounts.

Trump supporters on Instagram began contacting Don Jr. after the president’s son was temporarily blocked from posting about the Jussie Smollett hoax, an incident Instagram claimed was an error.

After this incident, Don Jr. posted a screenshot of a private message he received from a concerned Instagram user who said their account had automatically unfollowed the president’s son without their knowledge or consent.

Not only did Instagram censor my account yesterday for no good reason, but I get messages like the below all the time from my followers…it’s no secret big tech hates conservatives but this is getting ridiculous. It’s not just conservative accounts either. One of my closest friends from high school recently told me that the only way she sees my posts lately was to search my profile and in searching my name I wasn’t even a top account. Just want everyone to be aware this isn’t a level playing field. To accomplish the same thing and gain the same reach on social platforms conservatives have to work much much harder. It’s like playing pool with a rope. #bias

Don Jr. subsequently received a barrage of private messages informing him of similar issues. Screenshots of these messages, obtained exclusively by Breitbart News, can be seen below.

We’ve known for some time that major social media companies have been engaged in an effort to suppress conservative views and free speech, but these latest revelations about Instagram’s behavior demonstrate an even more sinister sustained, coordinated, and targeted campaign at anyone and everyone who supports the president and conservative views. I fear we are just beginning to pull the mask back on just how insane these hidden but all-powerful censors really are, and it is frightening to know how much control they have over what people see online.

One of the most common issues reported by Instagram users is that they have been prevented from liking posts after interacting with posts from Don Jr, President Trump, or other conservative accounts.

Users sent their stories to Don Jr., along with screenshots of the messages they received from Instagram informing them of temporary liking blocks. 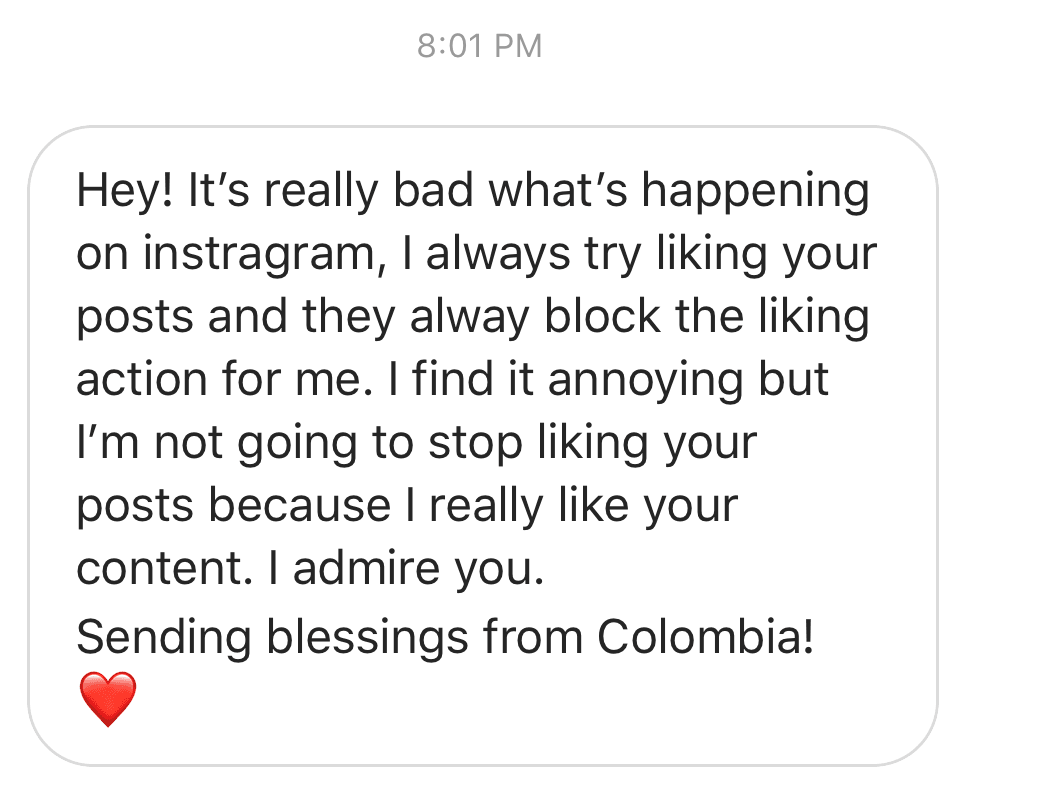 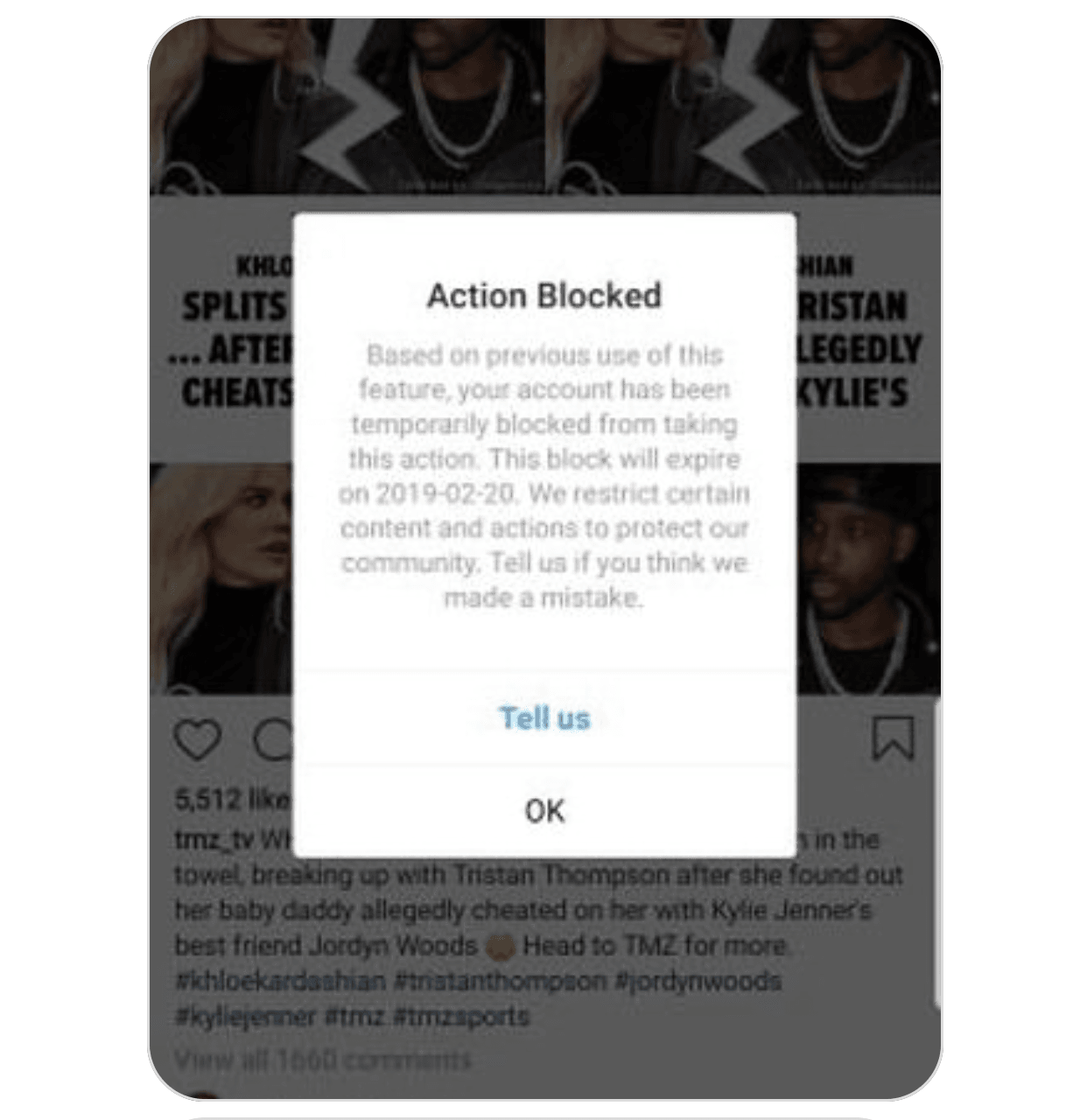 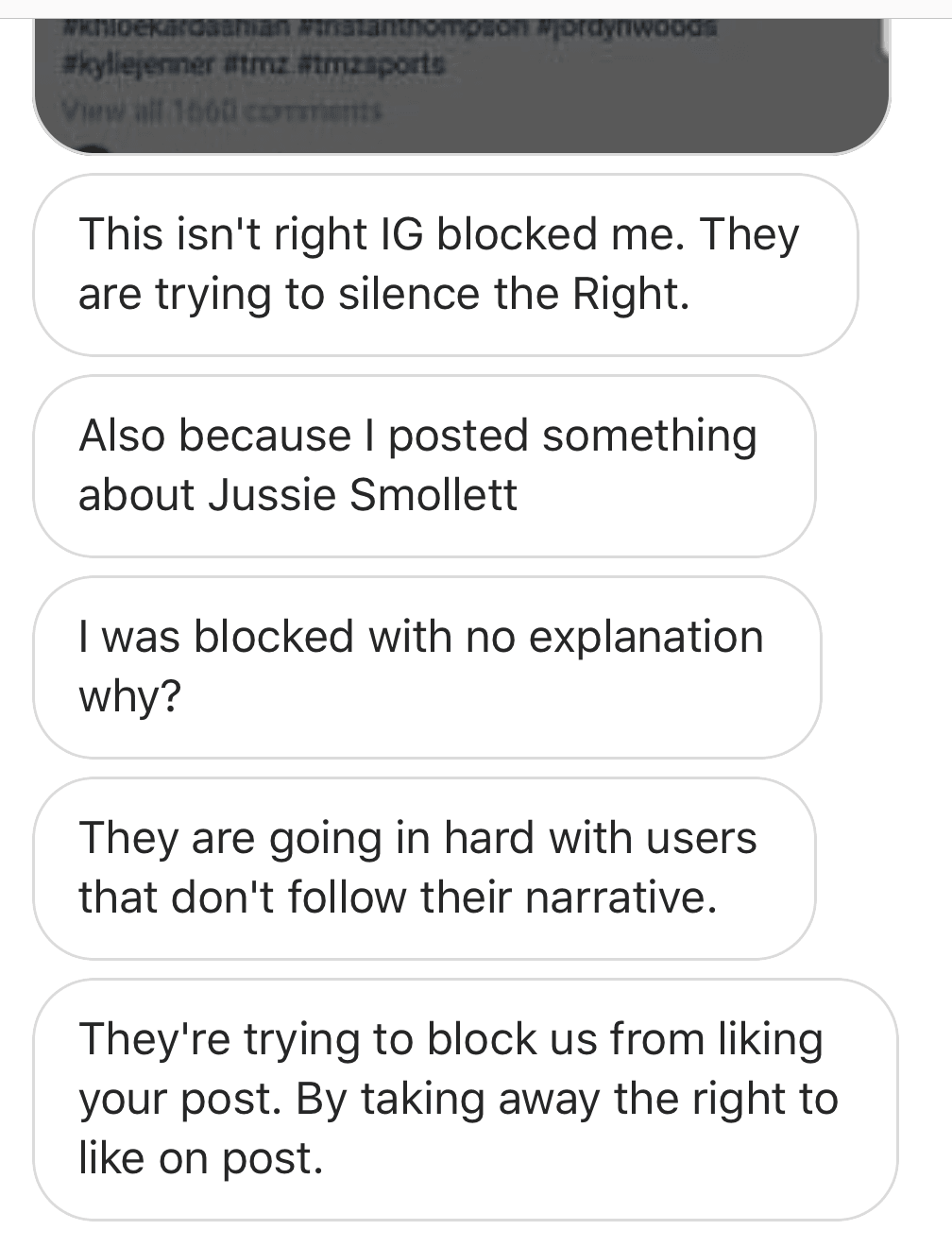 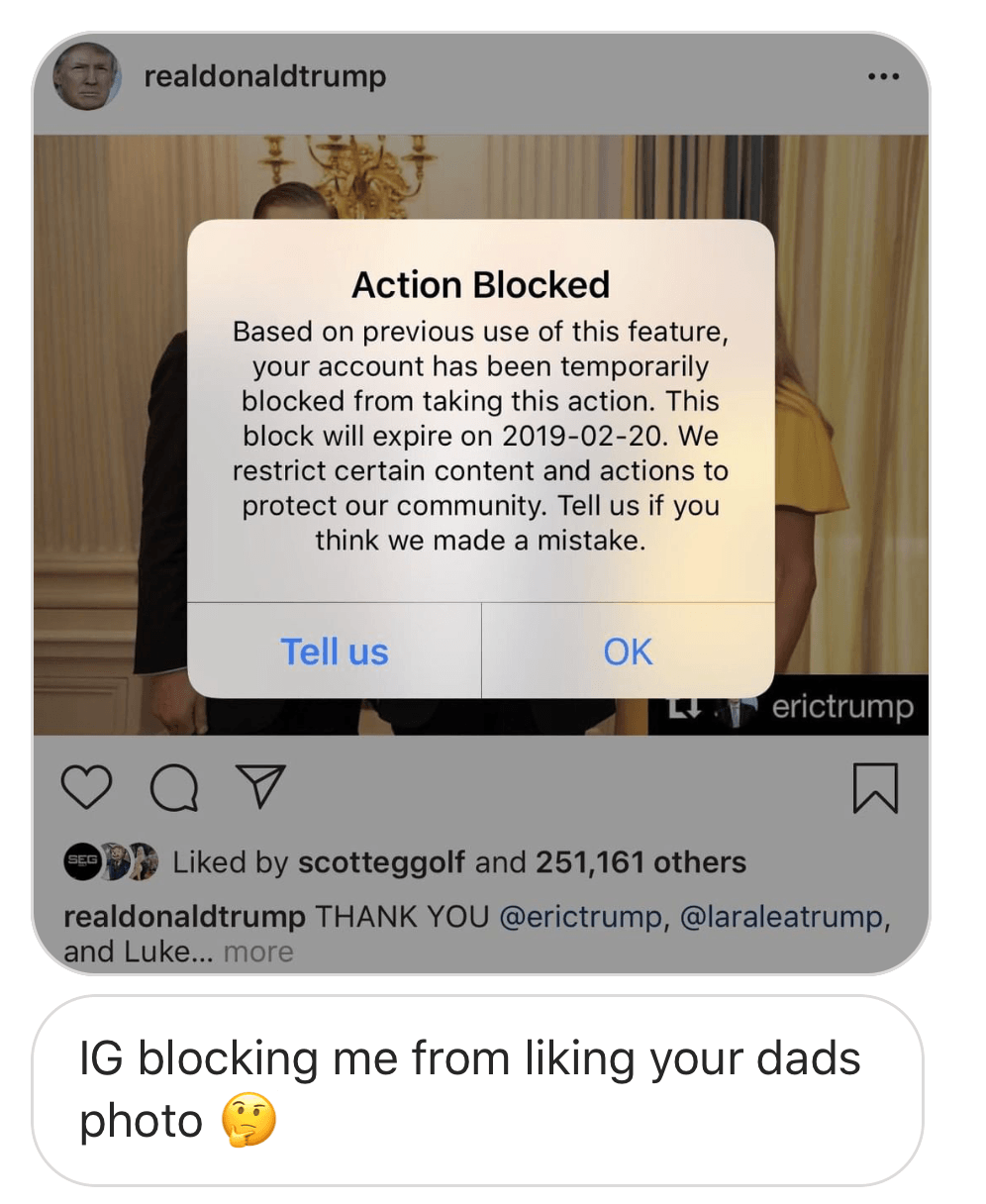 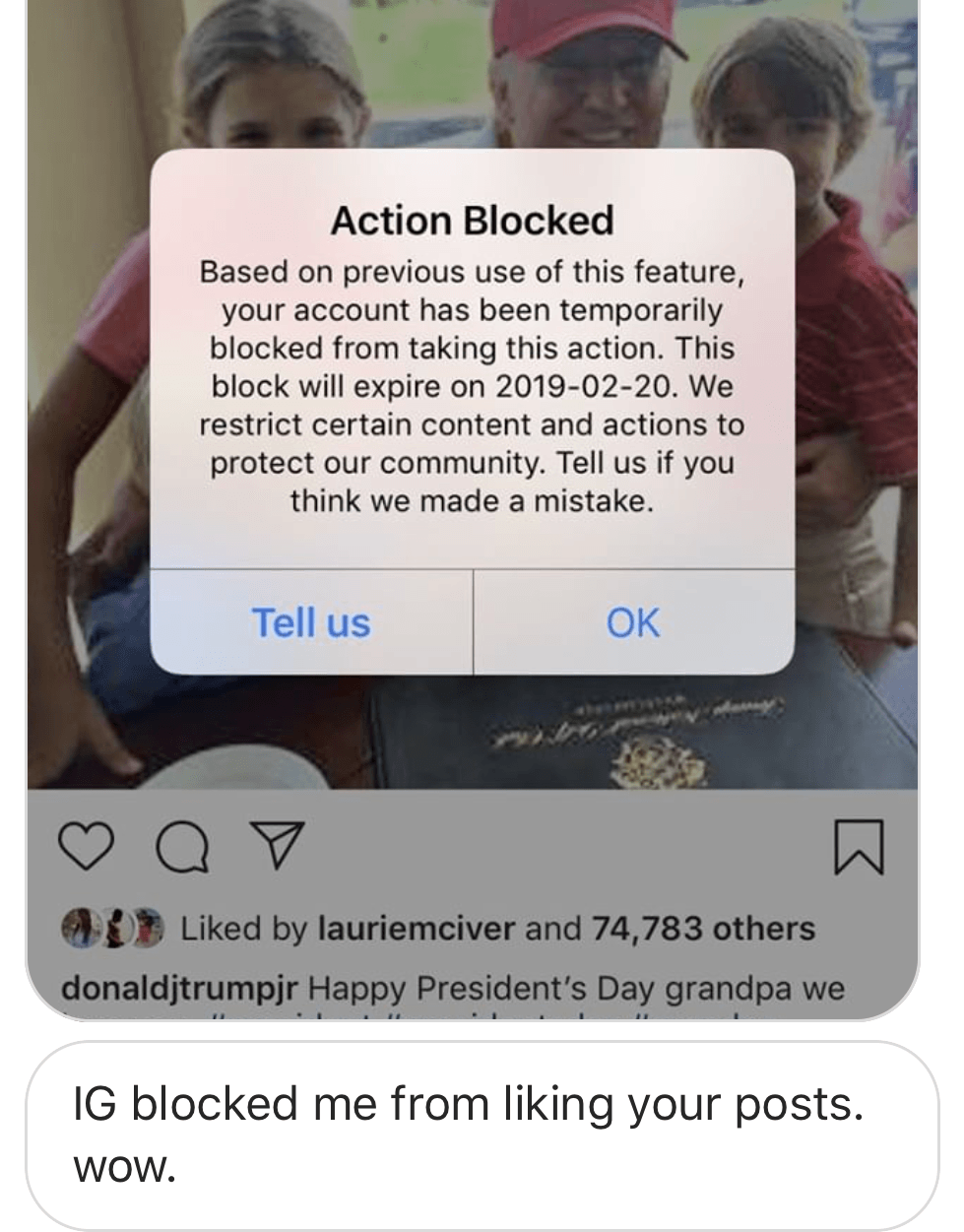 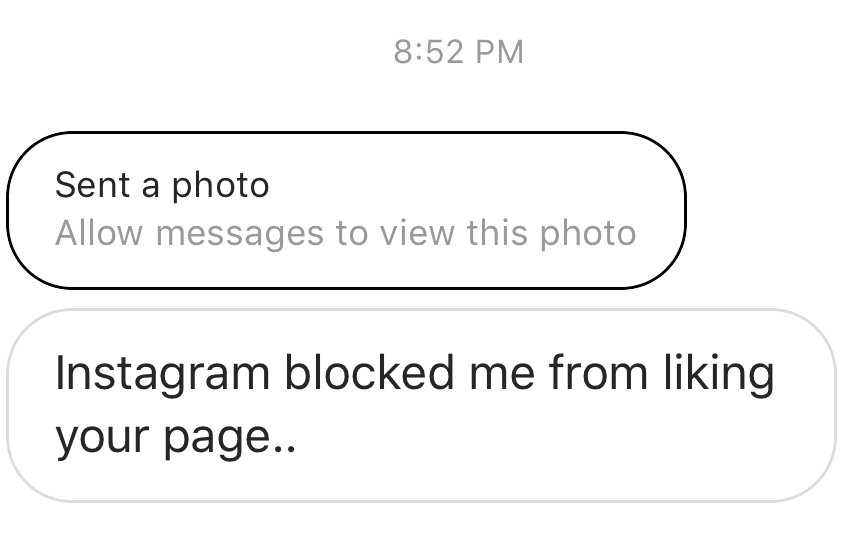 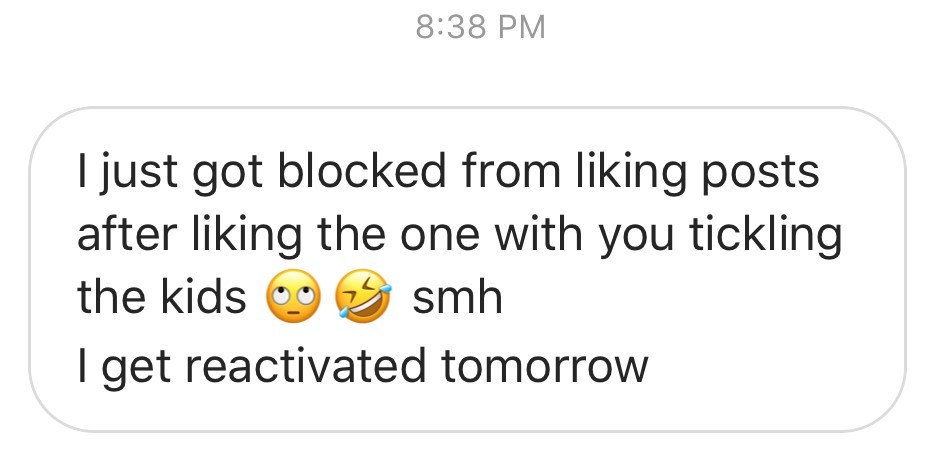 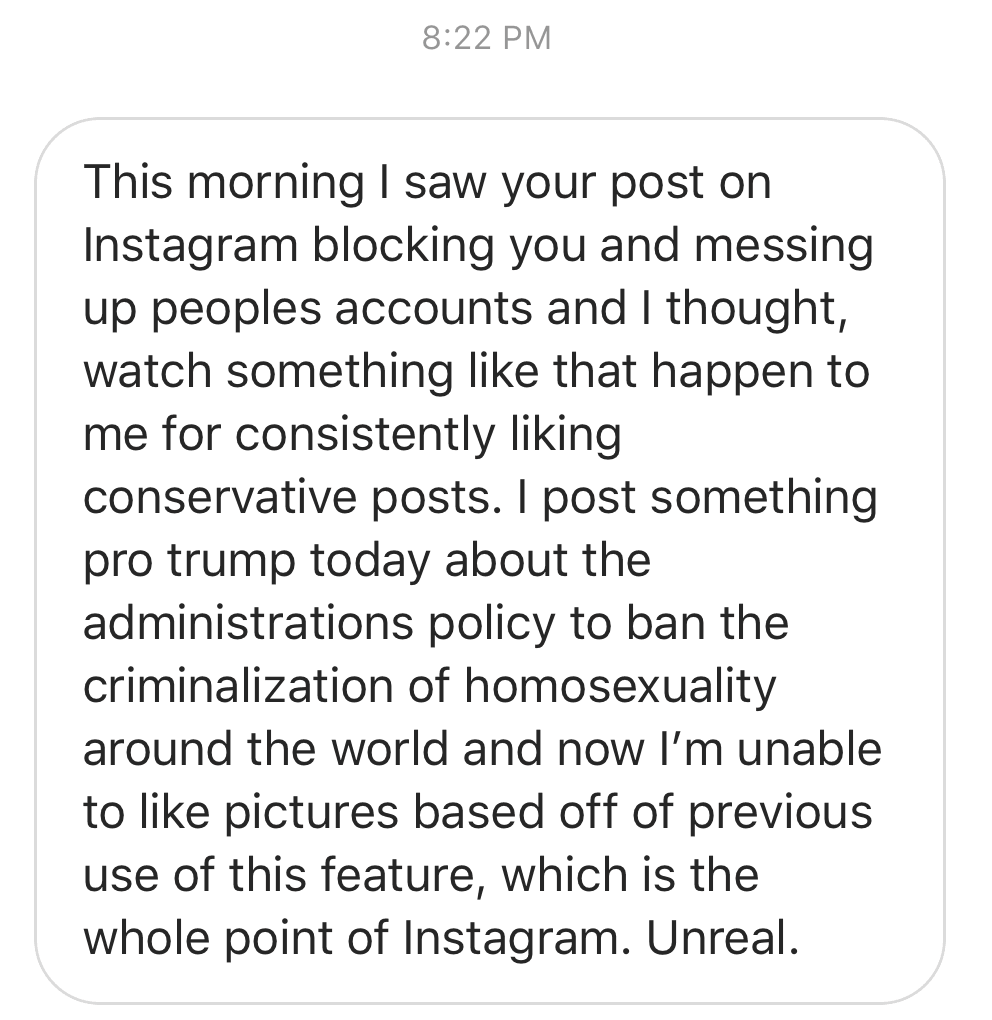 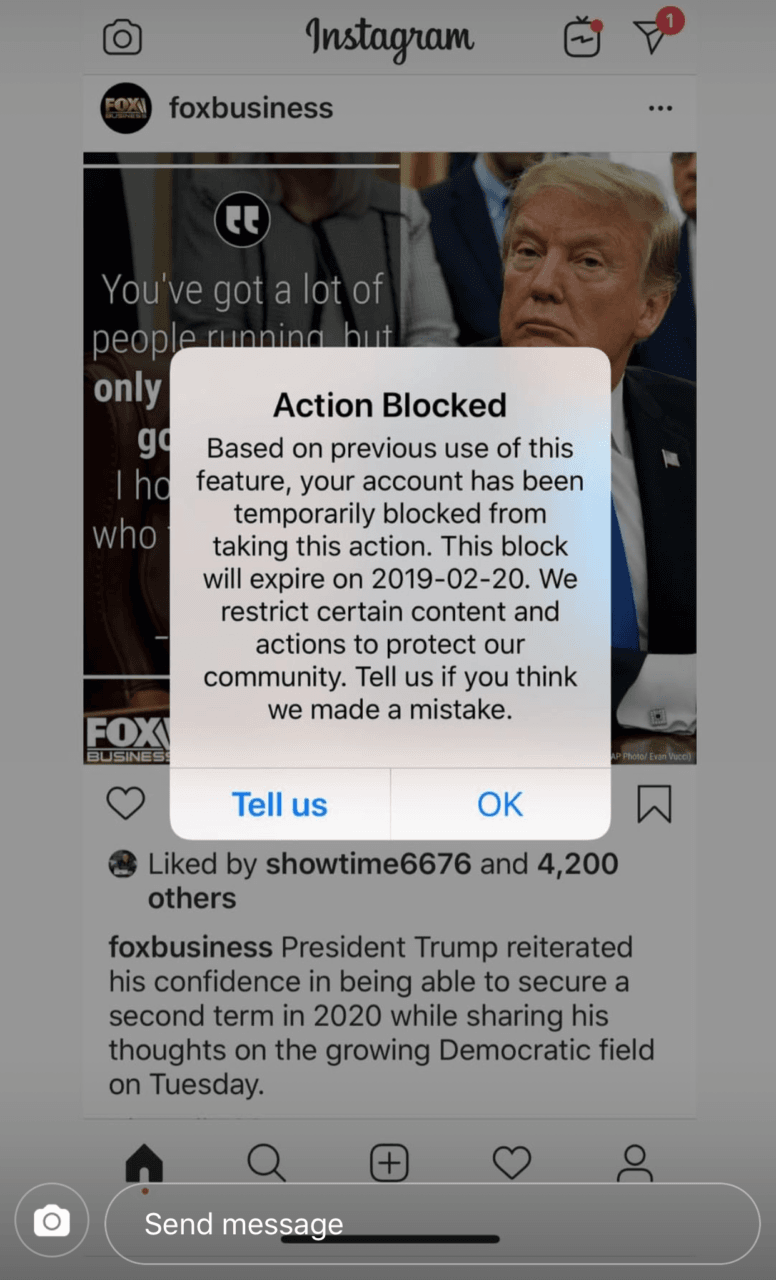 One user said she was blocked from liking content on Instagram after she posted about the Trump administration’s recent decision to fight the criminality of homosexuality around the world. Instagram recently faced controversy over LGBT rights abroad after an Indonesian LGBT comic strip disappeared from the platform following complaints from the Muslim Indonesian government. 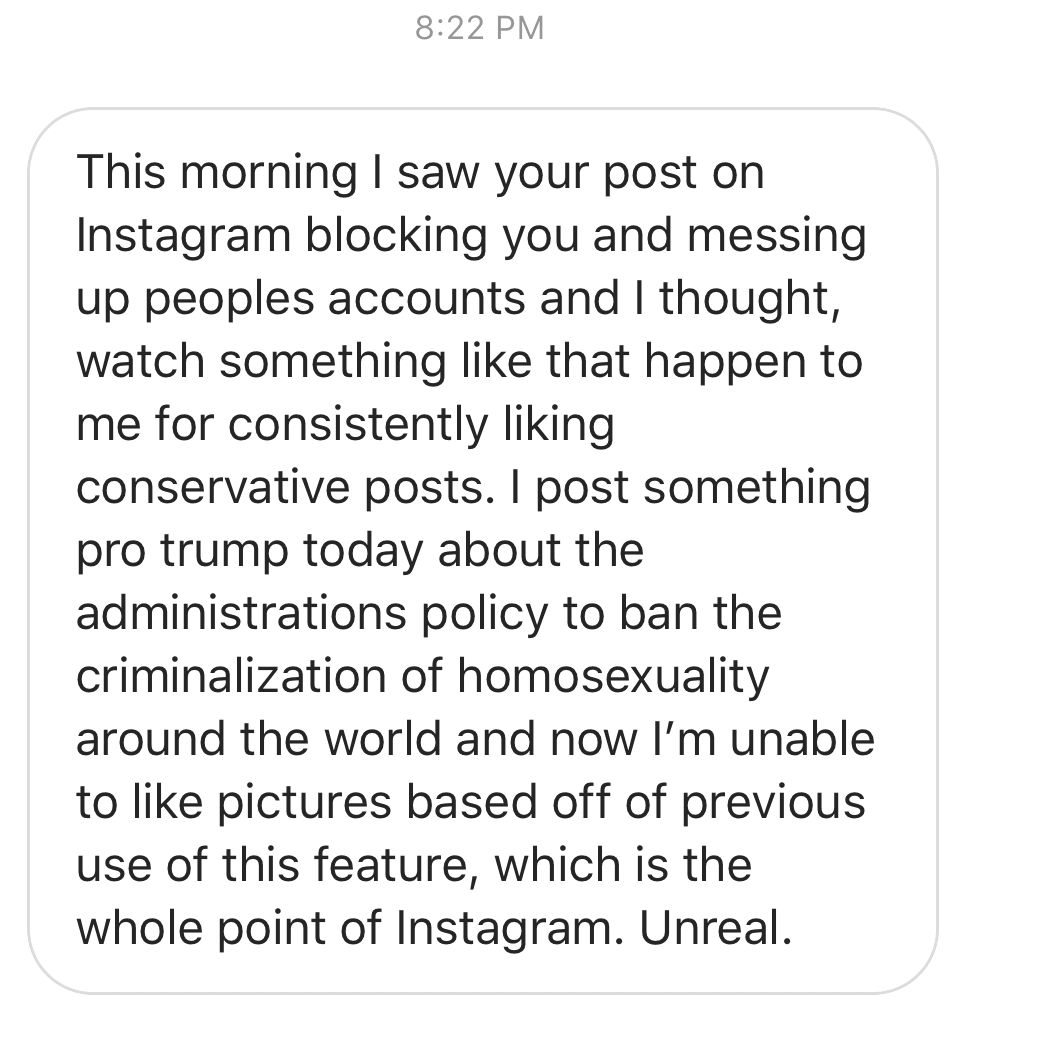 Wow. I always knew that social media was censoring me and other conservatives and my experiences this week only drove the point home. That said, I never knew it was this bad. Here’s just a small sampling of DMs that I’ve gotten since I called it out yesterday. I put some together to protect people’s identity and to show the magnitude. This is insanity! Everything from 1) had to re follow you a few times in the last few weeks because I keep checking and they are unfollowing you for me 2) I’ve been blocked from liking certain conservative posts including The President of the United States 3) I’ve been locked out of my account for a time period for liking said content. 4) IG has me following liberal accounts automatically that I never wanted to follow. 5) I’m still following you but you never show up in my feed anymore 6) when I search Don Trump Jr you don’t even show up as a thing in the search function. Etc Etc… Now imagine how many people this is happening to. How many people aren’t seeing what they want to see and how many people are totally in the dark that it’s happening. If I’m getting dozens upon dozens of these comments in my DMs how many more are being effected that don’t know or wouldn’t take the time to DM an account that probably won’t see it? Just look at the comments in my post from yesterday morning of other like minded people chiming in there are thousands… and those are just the ones that I’m not being shadow banned from. The numbers must be huge and this kind of leftist activism and censorship must finally stop. The attack on free speech cannot be allowed to continue on platforms as large as Instagram and with as much reach. This is no longer a simple little error or coincidence as they keep claiming. This is a systematic and sustained one way attack. IF THIS IS HAPPENING TO YOU, I URGE YOU TO SCREEN SHOT IT EACH AND EVERY TIME AND POST IT ON ALL YOUR PLATFORMS SO WE CAN FINALLY GET THE TRUTH OUT AND OUT AND END TO THIS OPPRESSIVE NONSENSE. PLEASE HASHTAG #socialcensorship #censorship #igsensorship #fbcensorship #twittercensorship SO WE CAN ALL FOLLOW ALONG AND SEE THE TRUTH COME TO LIGHT.

Another common issue being reported by Instagram users is that without their knowledge or consent, their accounts have automatically unfollowed Donald Trump Jr., President Trump, and other conservative accounts. 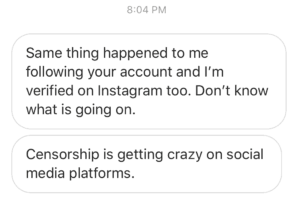 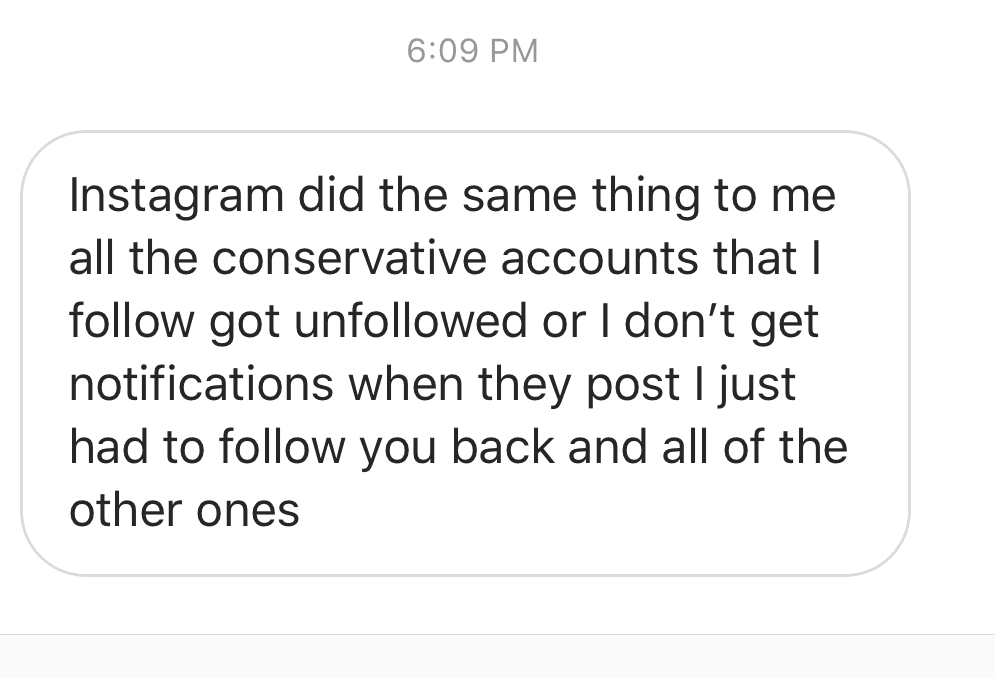 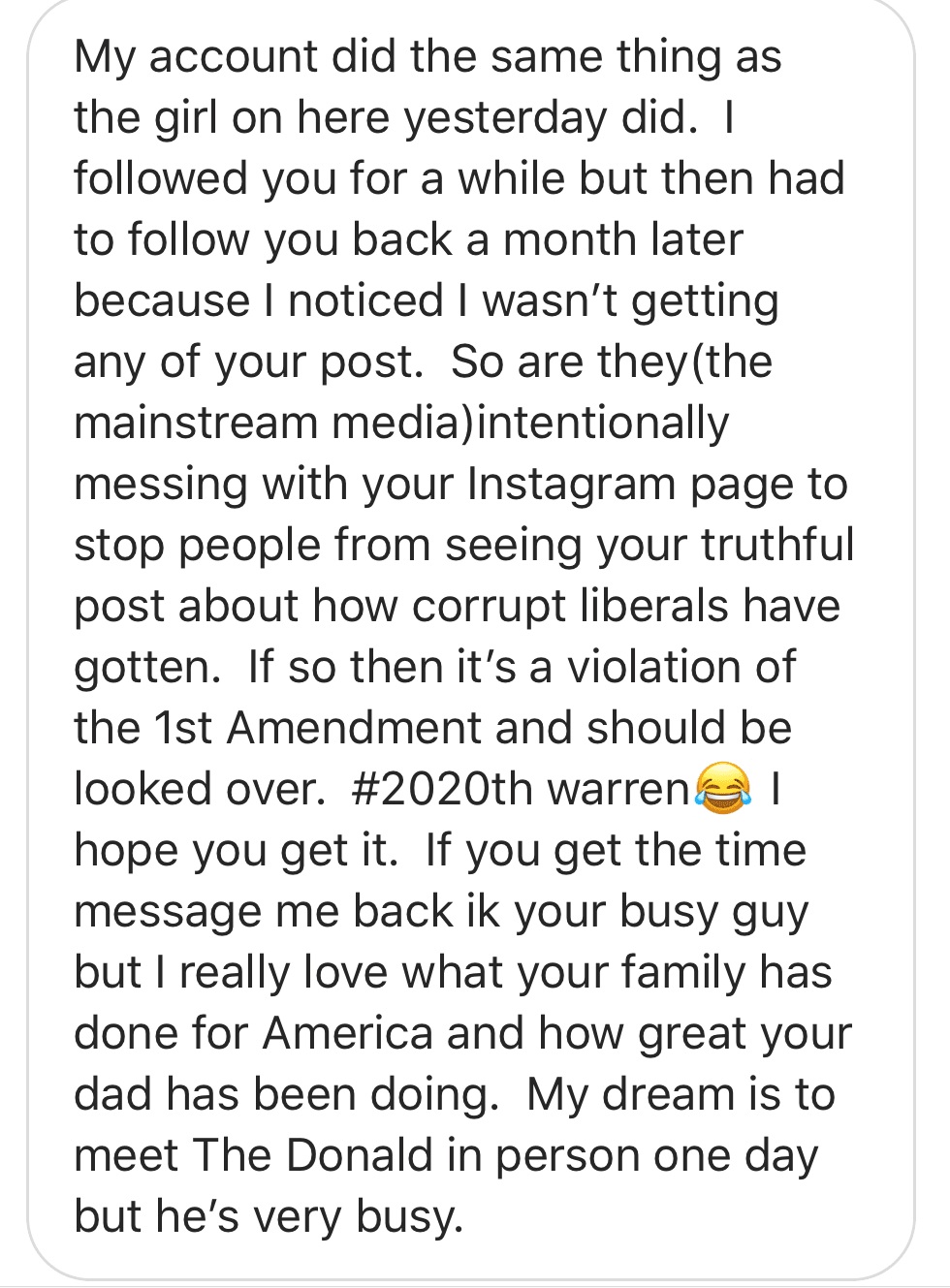 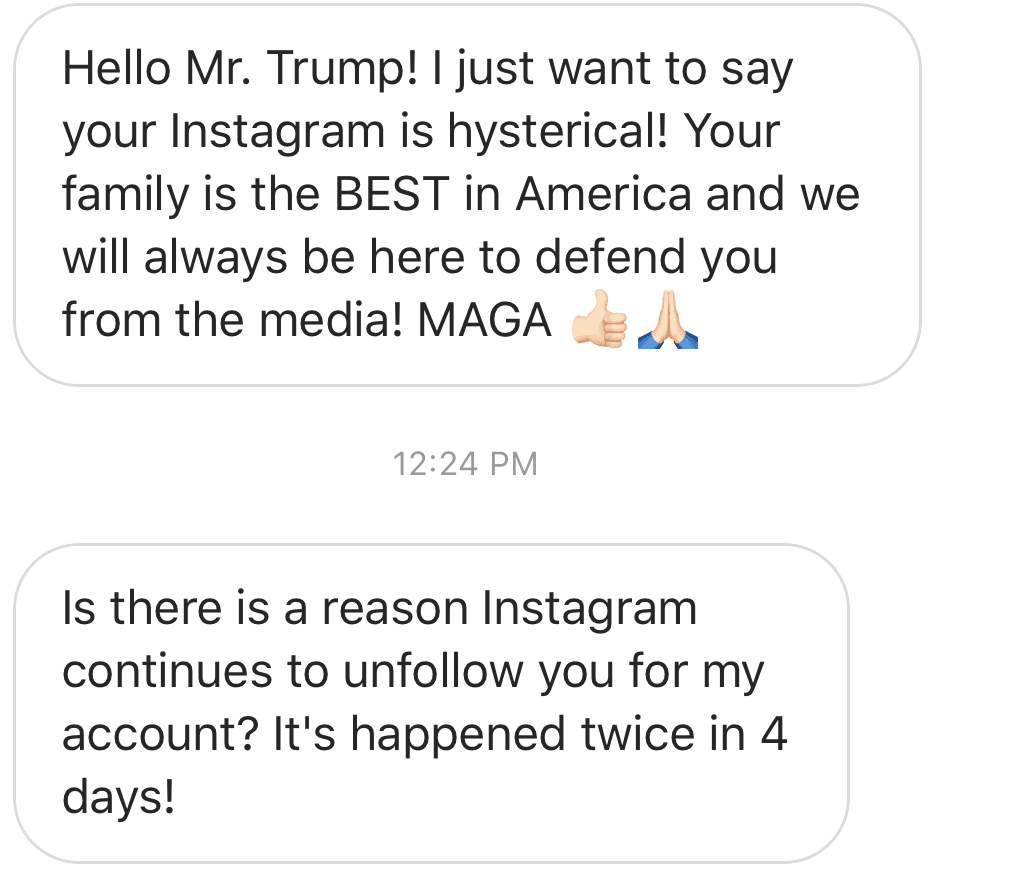 In a comment to Breitbart News, an Instagram spokeswoman said liking the President and Don Jr.’s posts could constitute “spammy behavior.”

“The ‘action blocked’ message is shown to people when we detect they may be taking part in spammy behavior, for example, liking multiple posts, following multiple accounts or similar. This is a measure we have in place to prevent spam on Instagram and isn’t specific to any one account.”