The Chinese-owned social media platform TikTok has reportedly begun an investigation and banned certain search terms linked to harmful pro-anorexia content. One expert explained that once a teenager has accessed eating disorder content, the platform floods their feed with the topic, because “TikTok is essentially designed to show you what it thinks you want to see.”

The Guardian reports that the Chinese-owned video sharing platform TikTok has launched an investigation and banned certain search terms after it was found that harmful pro-anorexia content was still easily found across the platform despite actions taken by the social media firm to crack down on the advertising of weight-loss products.

The app now has more than 800 million users worldwide, almost half of whom are aged between 16 and 24-years-old. TikTok has now placed new restrictions on weight-loss ads following criticism for promoting dangerous diets, but harmful accounts promoting potentially life-threatening eating disorders are still active across the platform.

TikTok blocked certain hashtags promoting eating disorders but searching those same words brought up dozens of accounts promoting anorexia and other eating disorders. TikTok has now launched an investigation and said that it has taken action to ban harmful phrases across all search verticals including when searching for users.

One account shows a message from a girl saying that she wanted tips on losing weight rapidly in a healthy or unhealthy way: 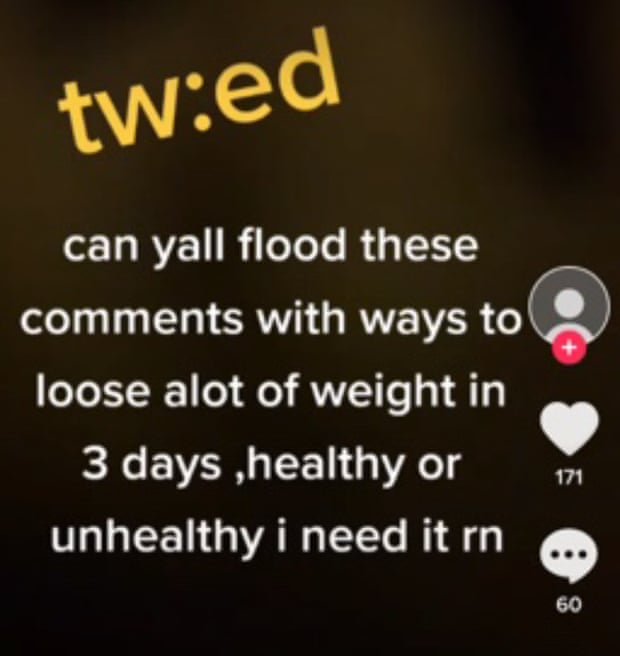 TikTok says that I thas banned six accounts flagged to them for violating the community guidelines related to posting content that promotes eating habits likely to cause health problems. University of Sheffield digital media lecturer Ysabel Gerrard commented: “It takes little more than 30 seconds to find a pro-eating disorder account on TikTok and, once a user is following the right people, their ‘For You’ page will quickly be flooded with content from similar users. This is because TikTok is essentially designed to show you what it thinks you want to see.”

A spokesperson for TikTok said: “As soon as this issue was brought to our attention, we took action banning the accounts and removing the content that violated those guidelines, as well as banning particular search terms. As content changes, we continue to work with expert partners, update our technology and review our processes to ensure we can respond to emerging and new harmful activities.”