Despite the presence of a range of leftist “fact-checkers” with the power to suppress posts on the platform and open censorship of conservative news stories by Facebook, Breitbart News is demolishing its establishment foes on Facebook.

Facebook has an established track record of censoring conservative media. It censored the New York Post twice, first for the Hunter Biden laptop story and then for a negative story about a Black Lives Matter co-founder. It censored Tucker Carlson’s page, reducing the Fox News host’s reach on the platform little more than a month before the 2020 election. It censored the Wall Street Journal over an op-ed on coronavirus.

And it censored Breitbart News — for a live video of a press conference.

Despite this demonstrable bias, over the last three months, the official Breitbart News page on Facebook generated nearly 40 million interactions — more than the New York Times, the Washington Post, the Los Angeles Times, and HuffPo combined.

The following graph comes from Crowdtangle, the Facebook-owned tool for analyzing activity on the platform. 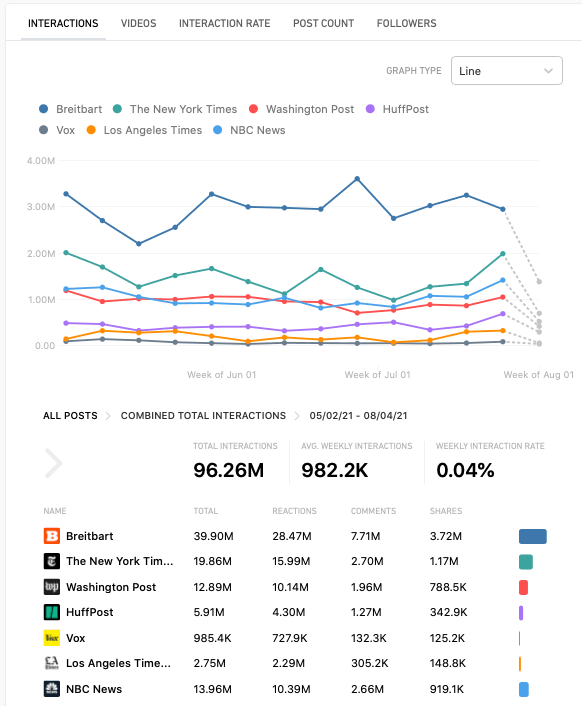 Breitbart News’ interaction rate of 39.9 million towers over far-left competitors like Vox, which totaled fewer than one million in the same period.

The rankings of some third-party analytics services, like NewsWhip, sometimes give Breitbart News a lower ranking than the above, due to the fact that it does not include native videos and photos in its calculations, an area where Breitbart outperforms its competitors.

Although Facebook has included Breitbart News in a 200-strong list of approved media outlets (most of which are establishment or left-leaning), Breitbart still faces an uneven playing field on the platform due to the presence of multiple left-leaning third-party “fact-checkers” that have the power to suppress publishers.

These “fact-checkers” include direct competitors of Breitbart News like USA Today, which suppressed a Breitbart News post on Facebook-owned Instagram in June 2020. These fact-checkers often decline to target posts from Breitbart’s competitors — for example, when HuffPo published disinformation about President Donald Trump profiting from a drug company’s coronavirus treatment, it was not fact-checked at all — not even with an “additional context” fact-check, the least severe kind.

Despite this advantage, HuffPo’s engagement fails to come anywhere near Breitbart News. Far-left media is failing on Facebook despite the advantage of biased fact-checkers (even Facebook VP Nick Clegg admits that fact-checkers pursue their own political agenda).

As to how much worse the establishment, left-wing media would be faring on Facebook if so many prominent conservatives had not been banned from the platform — we can only guess.