Thursday night the AP published a story based on a meeting with Pamela Geller, the woman who organized the Muhammad drawing contest in Garland, Texas. The story got a lot of attention once the AP sent out a tweet which seemed to suggest Geller ought to have regret for hosting the conference which resulted in two (carefully unidentified) deaths.

PHOTO: Pamela Geller at AP headquarters, where she said she had no regrets over TX cartoon contest that left 2 dead: http://t.co/cELdeaeqGd

When people began reacting in disbelief, the author of the story quickly blamed a staffer and threw him or her under the bus:

@lisalunu @aarondelay @Popehat if you read the story, that is not the hed. That was a tweet written by a staffer on our social media desk. — Meghan Barr (@meghanbarr) May 8, 2015

It’s true the tweet didn’t match the headline of the story but it was taken directly from the lede which reads “Does Pamela Geller regret organizing the Prophet Muhammad cartoon contest that ended in gunfire?” Perhaps “ended in gunfire” is better than “left 2 dead,” since it only seems to lay blame on Geller for the shooting, not for the deaths that resulted. The real question is why she should be expected to feel regret for any of it? At worst, the unnamed AP staffer who wrote the tweet was just riffing on the outline set up in the story.

In fairness, people can and do sometimes feel guilt for things they have no control over and for which they really ought not feel any guilt. There is such a thing as survivor’s guilt. So asking the question isn’t completely daft, at least as a kind of personal insight into what someone is thinking after a traumatic event.

But the way it’s framed here as the lede of the story suggests the big question the AP had was: Are you to blame? And that’s clearly not appropriate, since Geller was the victim of an assassination attempt. This is the equivalent of rushing to interview a rape victim and making the first question, “Do you have any regrets about what you wore?” Even if the victim says no, the implication remains that she might somehow be responsible for the crime committed against her.

Unfortunately, this pernicious lede is not the only problem with the story. Later on we get a brief resumé of Geller’s career as an activist, including her opposition to the “ground zero mosque.” The author then writes, “Most recently, New York City’s transit authority banned all political advertising after a judge upheld Geller’s right to run bus ads about Islam that said, ‘Killing Jews is worship that draws us close to Allah.'”

The offensive statement about killing Jews is in quotes, but who is being quoted? No clue or context is given, which would lead most readers to assume the author is quoting Geller’s bus ad. And since the ad was being placed by Geller, logically this hate-filled quote must have been her idea.

In reality, those words do appear on the bus ads in question, but they are in quotes along with an attribution which the AP forgot to mention. Here’s an image with Geller holding up one of the ads: 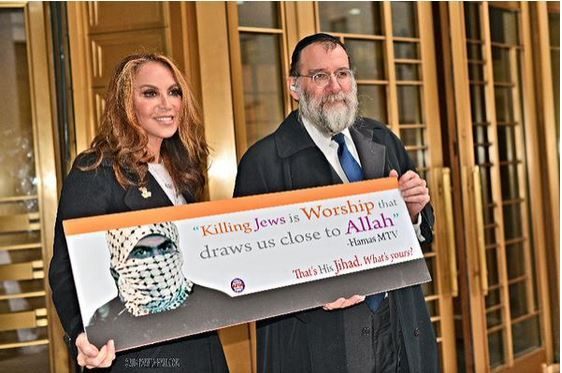 In other words, these aren’t Pamela Geller’s words; they belong to a real music video produced by the real terror group Hamas.  The background to this part of the story goes back to 2012, when the Council on American-Islamic Relations (CAIR) ran a series of outdoor posters which tried to de-stigmatize the word “jihad” with a campaign that featured cheerful slogans like “‘#MyJihad is to build friendships across the aisle.’ What’s yours?” Geller’s ads were obviously intended to play against that warm and fuzzy narrative.

All of this might have helped the author of the AP piece explain to her readers a bit more about why Geller does what she does. Instead we’re left with a sloppily written paragraph that will leave people thinking Geller herself has a very inappropriate sense of humor about “killing Jews,” something which couldn’t be farther from the truth.

Maybe the pointed lede and the even wildly inappropriate tweet based on it were just mistakes. Maybe the the bit about the bus ads was a mistake too. But taken together, it’s hard to avoid the conclusion that the AP wasn’t very interested in being fair to Pam Geller, which is odd given that a couple of heavily armed ISIS wannabes just tried to kill her and everyone standing with her.