George Stephanopoulos’ connections to the Clinton Foundation may be more substantial than he has so far admitted.

An archived page of the Clinton Global Initiative website lists George Stephanopoulos as a “notable member” for the years 2010 and 2011. ABC News has confirmed Mr. Stephanopoulos was a member during both years.

Blogger Jeryl Bier first noticed Stephanopoulos’ name on a CGI list of “notable past members.” The site did not specify when each individual listed had been a member. However, the Internet archive shows that Stephanopoulos was listed as a notable member in 2010 and 2011 along with a list of other well-known media members like Matt Lauer and Anderson Cooper. Here is the page as it appeared in September 2010: 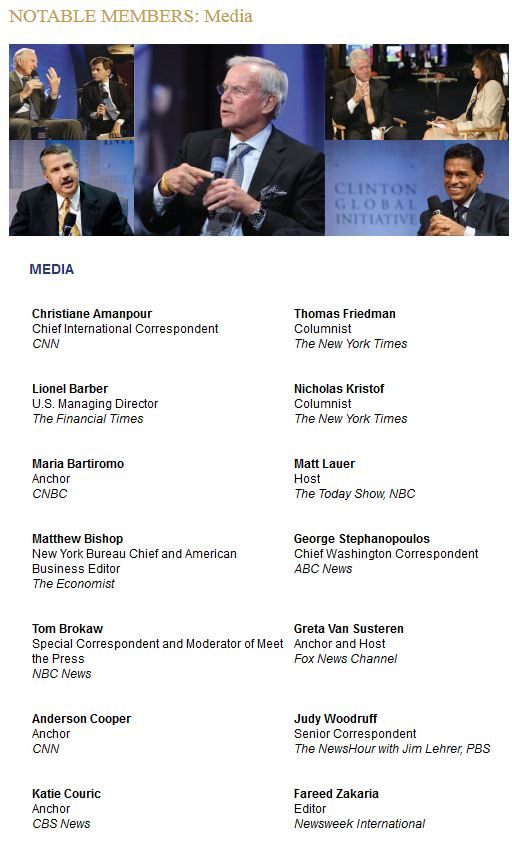 A contemporaneous FAQ explaining CGI membership states: “Participation is by invitation only, limited to a select and diverse group of heads of state, CEOs, media voices, philanthropists and foundation heads, religious leaders, original thinkers, and those who run highly effective non-profit organizations.” Membership in CGI usually costs $20,000 per year; however, the FAQ indicates that some complimentary memberships are available.

Breitbart News contacted ABC News and was told that Mr. Stephanopoulos did not pay a membership fee in either 2010 or 2011. According to a spokesperson, he was listed as a member because he moderated a panel for CGI events both of those years.

The Internet archive does not have a cache of the notable CGI members prior to 2010, but according to publicly available sources, Stephanopoulos also participated in CGI events in 2005, in 2006, in 2007 and in 2009. Therefore, it’s possible he was considered a member for every year between 2005-2011, with the possible exception of 2008, when he does not appear to have taken part in any CGI event.

On Wednesday of this week, the Washington Free Beacon discovered that ABC’s Stephanopoulos was listed on the Clinton Foundation website as a donor. WFB reporter Andrew Stiles contacted ABC News to confirm those donations. Rather than respond to the WFB, the spokesperson for ABC News appears to have leaked the story on the donations to Politico.

Eventually, Stephanopoulos admitted to giving $25,000 per year for three years, 2012-2014. He apologized in a statement given to Politico, saying: “I thought that my contributions were a matter of public record. However, in hindsight, I should have taken the extra step of personally disclosing my donations to my employer and to the viewers on air during the recent news stories about the Foundation. I apologize.”

Stephanopoulos’ failure to disclose those donations when interviewing the author of a book critical of the Clinton Foundation has led to complaints about biased coverage of the Clintons. Stephanopoulos conceded that he would not take part in any GOP primary debates for ABC News, but the network has said it continues to stand by him and will allow him to lead its political coverage in 2016.

Breitbart News contacted The Clinton Foundation about Stephanopoulos’ membership in CGI, but the organization did not offer a response in time to be included in this story.