The Guardian used their headline spot on the Wednesday on-line edition to unironically highlight the frighteningly racist opinions of London’s ethnic minority youth.

Brimming with resentment, racism and class envy, the article published excerpts from a new documentary accompanying a forthcoming immersive theatre project at London’s Roundhouse. Created by the same team behind Glastonbury festival’s politically charged Block 9 area, the interviews revolve around the experience of living in London for young and very clearly misanthropic men. 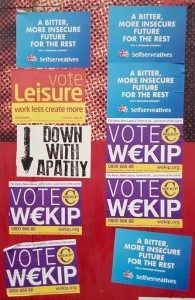 Self-identified “black person” Sam is the first excerpt – and he is very angry about white people jogging around his estate in Kings Cross. Sam is clearly a very territorial young man – making quite clear that he considers the estate his own and that interlopers from other ethnic groups are not at all welcome, least of all white middle class people, he explains: “At like 8pm, I looked to the side and I saw 60 white people, all who looked between the ages of 24 and 32, all smiling. Half of them were wearing matching red T-shirts with a slogan on it. There were two leaders at the front … and it was the scariest thing I’d ever seen in my entire life.

“It was like they were sending a squad to go and scout the area – like before the Death Star arrives or something. It was absolutely frightening, so weird to see them, all smiling and happy. They looked like they all had jobs in like PR companies and were really successful”.

After complaining about the graffiti and neglect his estate apparently suffered from, Sam immediately moved to condemn efforts to improve the area: “On the other side of the estate, there’s a big sign with a middle-class white lady in a nice dress, which says: “Maiden Lane: a place for everyone”, when the whole point of social housing is that it’s for the poorest people. “A place for everyone”? That’s fucking ridiculous.

“And the reason I was so afraid when the runners came through is because I know the higher rents come with them. I know I won’t be able to afford my own area because those people are jogging through it”.

So far, so Guardian. Next up is confused Kadir, who eloquently justifies his thieving habit on the proclivity of successful people to have nice things. Walking to school past the elegant town houses of Hampstead and visiting his friends in the same four storey villas “encouraged a mentality of robbing”, he claims. “You’d see these people, who were just so timid. You’d think: “He’s got the newest Nokia that his Mum’s just bought for him, so let me have that.’ And you’d know they’d just say ‘take it’, because they can just get a new one. But I could sell it and hopefully save money for my own phone, or spend it on drugs or something”.

So there you go, white people. Don’t be shocked when London’s ethnic minorities (well, majority actually) hate you, or steal your stuff. It’s just your conspicuous whiteness – your matching crossfit T-shirts, new mobile phones, and menacing happiness. And don’t even think about moving to an area where rents aren’t so astronomically high they don’t consume your entire income. You’re not welcome.