Last week, Politifact Georgia decided to fact-check a tweet by a pro-life group called Alliance Defends. Every statement the group made in the tweet was factually accurate, but Politifact gave the claims a “Half True” rating. 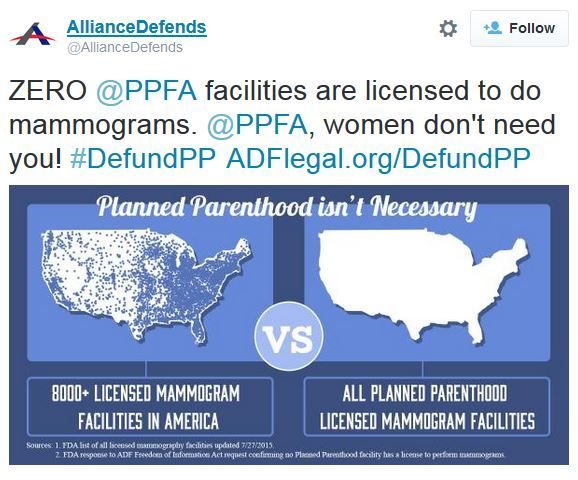 There are really only two claims made in this tweet. The first is that there are no Planned Parenthood facilities licensed to do mammograms. The graphic is really a visual restatement of this claim. Is it true? Well, here’s what Politifact’s April Hunt found:

[Alliance Defends Senior Counsel] Mattox pointed us to the Food and Drug Administration’s list of facilities licensed to perform mammograms under the Mammography Quality Standards Act. The agency certifies the facilities across the nation and in military bases worldwide.

The list, updated weekly, includes more than 8,700 facilities. A representative from the FDA did not get back to us by deadline, but a search of the list does not yield any facilities with the official “Planned Parenthood” name in its title.

Planned Parenthood spokeswoman Liz Clark confirmed why: The organization does not provide mammograms at any of its health centers.

So this is settled then. Author April Hunt concludes, “Mattox is correct, by Planned Parenthood’s own acknowledgement, that the organization does not provide mammograms.” This is, in fact, an old argument fact checkers have looked at in the past, always reaching the same conclusion.

Now that we know the first claim, and the map based on it, are factually accurate, all that’s left is the statement “PPFA, women don’t need you!” The same idea is recapitulated in the graphic as “Planned Parenthood isn’t necessary.” So what role does PPFA play in mammograms given that it does not actually provide any?

Based on those clinical exams and a doctor assessing risk factors, the group refers patients for mammograms and/or specialist follow-ups for procedures such as biopsies and, in some cases, financial assistance, Clark said.

In that regard, Planned Parenthood functions mostly as a privately paid OB-GYN would in referring a patient for a service the doctor’s office didn’t provide.

As Alliance Defends’s Casey Mattox tells Politifact, “There are other health center options, with licenses that can do this directly on site.” This is not an after the fact thought that just occurred to Mattox. In fact, Alliance Defends has spent weeks tweeting out maps for each state to make the point that women have lots of other options to get referrals other than PPFA. Here’s one that gives the numbers for every state at once: 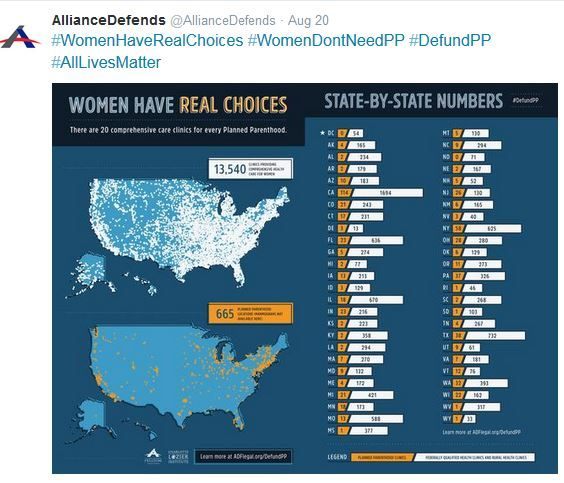 Given the difference of opinion between Planned Parenthood and Alliance Defends, Politifact sought out a third party for their opinion. “Dr. Otis Brawley, the chief medical officer at the American Cancer Society, agrees that Planned Parenthood does not need to be the referring physician for a mammogram,” Politifact notes. One could accurately paraphrase this as “Planned Parenthood isn’t necessary,” and it would seem we have all the makings for a “True” ruling.

But somehow, Politifact’s April Hunt manages to completely bungle the facts she has assembled in her conclusion [emphasis added]:

The physical exam is a necessary step in the process of getting the screening, although ADF has a valid point that other physicians could provide that piece of the process.

That puts the claim in the realm that won’t make either side happy: partially accurate but misleading without additional details. We rate the claim Half True.

Somehow, we’ve shifted from the fact-checking the claim made by Alliance Defends (i.e., that Planned Parenthood isn’t necessary) to the claim that a physical exam is necessary. Of course this is a claim Alliance Defends never made. On the contrary, they conceded this point which is why they tweeted multiple maps showing other clinics where a referral could be obtained. Everything the Alliance Defends tweet said was true, but, by some confusion known only to the author, we wind up with a “Half True” rating.

There’s an addendum to this story that makes it even worse. Just last month Politifact rated a cartoon about the wage gap. You can view the cartoon, but what matters is the reasoning found in the conclusion:

There is no implication that the jobs being done by men and women are identical, so Toles avoids the mistake of suggesting the gap is that wide for the same jobs. It’s not.

The cartoon is an oversimplification of complex data that has been misread and misused repeatedly. But adding more context would have meant more than a one-panel cartoon.

Toles keeps his claim broad enough to fall in line with the U.S. Census studies. We rate his claim Mostly True.

So in a similar situation where—as with a tweet—limited space was a factor, Politifact gave the cartoon author a “Mostly True” ruling. The author of that fact-check was April Hunt, the same person who judged the Alliance Defends tweet “Half True.”

Why didn’t Hunt use similar reasoning in judging the tweet? Breitbart News contacted Hunt by email, pointing out the apparent discrepancy between the two rulings and asking for an explanation. Hunt did not reply.