…A big fat NOTHING.

Or at least as close to nothing as makes no difference – says a new study published at Science Advances.

If we were to burn all the world’s coal and all the world’s oil tomorrow, the resultant effect on the Antarctic ice sheet – the biggest body of ice on the planet – would be to cause sea levels to rise by the end of this century by just 8cm.

What this means, in other words, is that even were the doomiest of doomsday predictions about climate change and rising sea levels to come true, they would take place on a timescale so slow that no one alive on the planet right now would be remotely affected.

Nor their children, nor their grandchildren, nor their great-grandchildren. It will take till at least 2200 for sea levels to rise even a metre – giving our ingenious future generations plenty of time to build their escape space ships, or roll up their trouser legs, or move a half a mile inland, or whatever they deem necessary to cope with the gently-rising waters.

This is not necessarily the take home message the report’s authors wanted you to hear. As Lewis Page notes at the Register, the study is the work of men like Dr Ken Caldeira whose credentials as a “global warmist” are “impeccable.”

That’s possibly why when the study came out it was published with an alarmist, attention-grabbing press release more in line with the research team’s warmist thinking:

“Burning all fossil energy would raise sea-level by more than 50 meters”.

Possibly true. But if you look at the small print of the study, as Page has, what you realise is that this process will take at least a thousand years, probably more to complete. 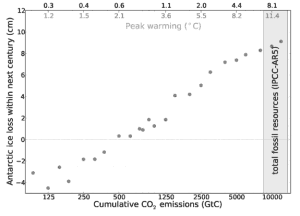 The charts cannot lie. (Well they can because they’re only projections, not observed, real-world data). Even so, let’s say Dr Caldeira and his team are correct in their predictions. If so then the graphs just couldn’t be clearer about the aquatic disaster which awaits us if the Antarctic ice sheet melts due to our carbon guzzling lifestyle…

Never in any of our lifetimes are we going to see Kevin Costner with webbed fingers. Not unless we’re feeling masochistic, anyway.