David Horowitz is under heavy fire from the Republican establishment for his article “Bill Kristol: Republican Spoiler, Renegade Jew,” in which he points out that, as the presumptive Republican nominee, Donald Trump is “the only obstacle to the party of Obama and Hillary and Huma Abedin, of the Iran deal and the appeasement of Islamic Jew-hatred beginning with the Hamas terrorists of Gaza and the Fatah terrorists of the West Bank.”

It’s revealing how weak, spineless Jews go off when a proud Jew calls out them out. That’s what happening now in this brouhaha between Horowitz and Kristol. The GOP elite — The Weekly Standard, National Review Online, et al — has betrayed our key principles for years now and has gotten away with doing so. The Republican establishment has now jumped the shark with the #NeverTrump movement — happily throwing Republicans under the bus because Trump isn’t “controllable” or one of them.

Breitbart readers know that I have been a vocal supporter of Ted Cruz, coming out and endorsing him early, back in May 2015. I was and am critical of Donald Trump because of his dangerous and reckless remarks about the First Amendment and our Muhammad Art Exhibit in Texas and his personal attacks on me, as well as his position on eminent domain, free trade, etc. But the fact is that Cruz lost, and I will support the GOP nominee.

But instead of throwing their support before the man whom Republican voters have chosen out of a crowded field, GOP elites including Kristol and Mitt Romney are talking about an independent party run. What hubris. It is the height of stupidity and arrogance. Acting more like Democrats than Republicans, the #NeverTrump RINOs mean to upend the will of the people.

That is not who we are. The fact is that conservatives held our noses and supported RINO John McCain, and after that we supported weak sister Mitt Romney. Now it’s their turn, whether they like it or not. A third party run will destroy the GOP and hand the election over to the corrupt and criminal Clinton. See the groundbreaking film Clinton Cash to grasp the depth and breadth of Hillary Clinton’s crimes. There is no contest between Trump and Clinton.

Ben Shapiro also came out against Horowitz – yes, the Ben Shapiro who bravely staked his career on the laughable claim of assault of journalist Michelle Fields by a Trump staffer. Shapiro actually changed his Facebook description to “Michelle Fields’ former co-worker.” 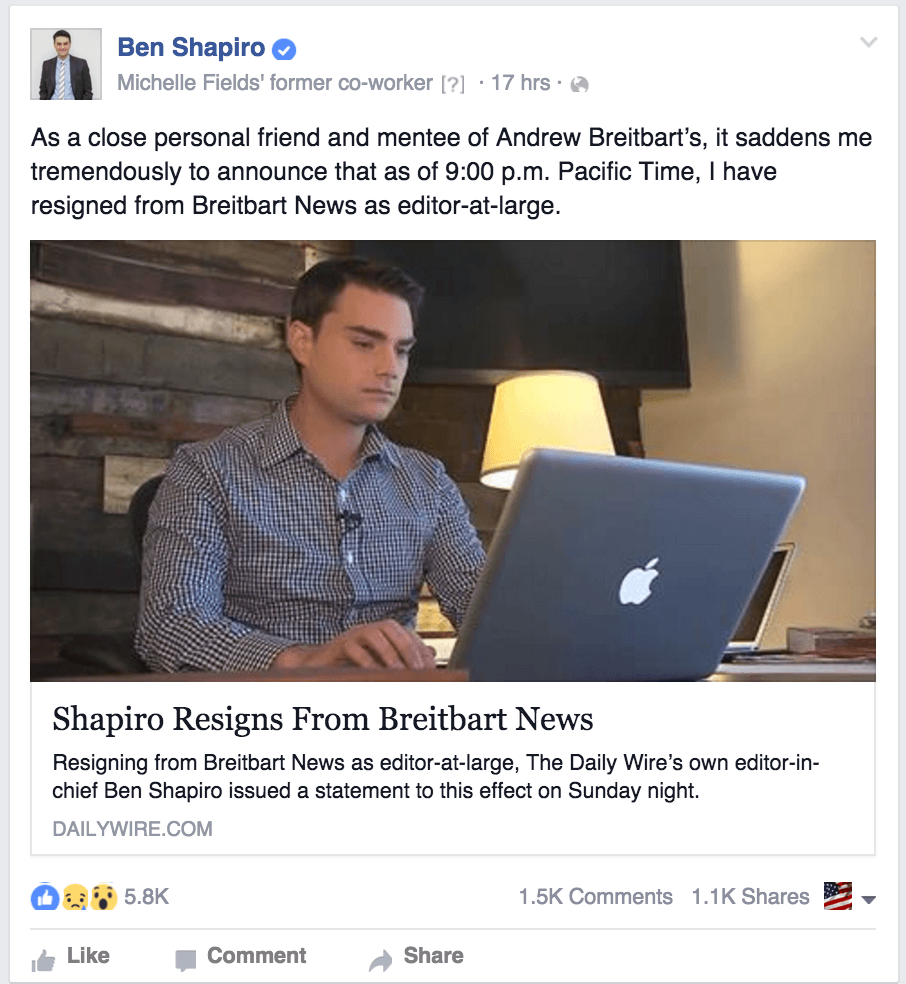 Even after video and photos showed how ridiculous the journalist’s claim was, Shapiro exploited the #Never Trumpers such as Megyn Kelly, National Review, and The Weekly Standard, and made his bones (and a new career) on this disgusting and fallacious smear campaign.

As Jews and supporters of Israel, Kristol and Shapiro should know better. If you are a Jew in this troubled world, the contrast could not be sharper. Clinton’s longtime relationship with her top aide Huma Abedin, an observant Muslim whose father, mother and brother were all Muslim Brotherhood operatives, should give every Jew pause. Hillary Clinton’s husband sold out the Jews to Yasir Arafat. She herself has been bought and sold by our enemies many times over.

JINOs (Jews In Name Only), aka Jewicidals, have been betraying us for far too long. Those of us who for years have been fighting Islamic Jew-hatred and opposing jihad have been personas non grata in their publications and at their conferences. If you don’t trim the truth and parrot their toothless narrative, they marginalize you as effectively as does the uber-left. And there you have it. These Jews have more in common with the party of treason than they do with the most courageous defenders of freedom, individual rights and the freedom of speech.

This will destroy the Republican Party, and maybe that is what is needed. When Mitt Romney and his crew of keystone clowns are more vicious toward Donald Trump than they ever were toward Obama or any other of the traitorous Democrats, I say, throw the bums out. We need a revolution.

The talk of mounting a third-party run is incomprehensible. We have been down this road. Ross Perot split the party in 1992 and handed the presidency to Bill Clinton, who would have had no shot (and certainly didn’t deserve one) had the split not happened. But Perot siphoned off close to 20% of George Bush’s vote, the GOP lost the White House and the Clinton reign of corruption began. Didn’t we suffer enough?

Now Bill Kristol and his comrades want to impose Clinton 2.0 — a Hillary/Huma ticket. “Renegade Jew” is too good for him.