A new study by the indefatigable Media Research Center (MRC) has revealed that mainstream media devoted some six times as much air time to covering the recent death of Harambe the gorilla than they did to the gruesome Islamic State decapitation of 21 Coptic Christians on a Libyan beach last year.

On Saturday, May 28, security officials shot a gorilla named Harambe to protect a three-year-old boy who had fallen into the animal’s pen at the Cincinnati Zoo.

In the five days that followed the animal’s death, the three major networks devoted a total of 1 hour, 28 minutes and 17 seconds to the story during their morning and evening news shows. An unfortunate incident, to be sure, but as one commentator noted, “a tempest in a teapot.”

By contrast, in February 2015, a group of black-clad Islamic State militants slit the throats of 21 Coptic Christians on a beach near Tripoli, which garnered only a fraction of the gorilla coverage. The terrorists videoed the execution, as the Christians, dressed in orange jumpsuits, fell one by one to the ground dead.

MRC’s Katie Yoder found that ABC, CBS and NBC spent a combined total of only 14 minutes and 30 seconds covering the massacre of the 21 Christians, which is less than a sixth of the air time that they dedicated to the gorilla.

The scant mentions of the Christian slaughter at the hands of Islamic jihadists pale in comparison to the lavish attention paid to the epic saga of the death of one gorilla, or the “zoo horror,” as Good Morning America described it.

The Minneapolis Star Tribune published a cartoon by Steve Sack underscoring the incongruity of attention paid to the animal. The vignette depicted a boat full of refugees and a gorilla in a cage also in the boat. His caption depicted one of the refugees pointing to the gorilla and saying: “We brought him so people would care what happens to us.” 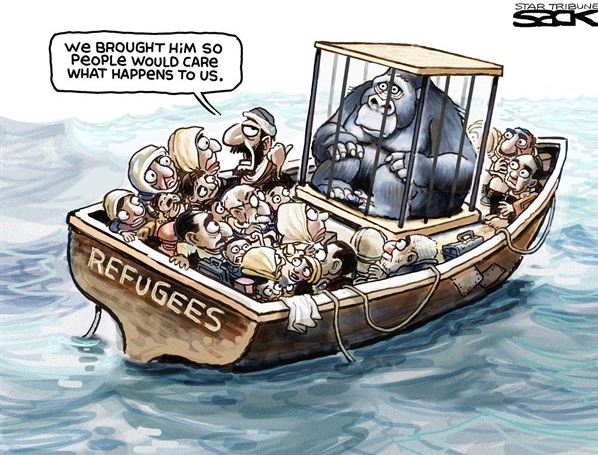 A group of demonstrators distressed by the death of the gorilla held a vigil at the Cincinnati Zoo to mourn the animal’s demise.

The activists held signs remembering the loss of the gorilla, bearing slogans such as “All Animals Lives Matter,” “R.I.P Harambe,” “Taken Too Soon,” and “Senseless Death.” A framed picture of the gorilla was set up as a memorial.