You could almost hear the distant din of the funeral-home Wurlitzer.

“There’s no other word to describe it—this is a surprise,” Chris Matthews informed MSNBC viewers at 10:35 p.m. Three minutes later Eugene Robinson noted, “The polling seemed to indicate something different than tonight.”

Over at CNN, where talking heads used their inside voices, Jake Tapper wondered at 11:01 when pundits should stop talking about Trump’s narrow path to victory and start talking about Hillary’s. “Brooklyn,” he deadpanned, “we have a problem.” Fifty-three minutes later, commentator David Axelrod admitted: “This is clearly not the race we expected.” Still later, Van Jones maintained: “You have people putting children to bed tonight, and they’re afraid of breakfast. They’re afraid of ‘How do I explain this to my children?’”

Over at Fox, Juan Williams observed at 11:28: “There’s not a Democrat watching who is not just bewildered but sick to their stomach.” Back on MSNBC, Kristen Welker reported at 1:58 that the Clinton campaign “has gone dark.” Seven minutes later, over the soundtrack of Katy Perry’s “Roar,” the network’s cameras captured the whimpers of Clinton supporters. They cried and hugged as viewers wondered if MSNBC cut to the sad scene to prevent viewers from spying the sad scene of Rachel Maddow and Eugene Robinson crying and hugging back in the studio. 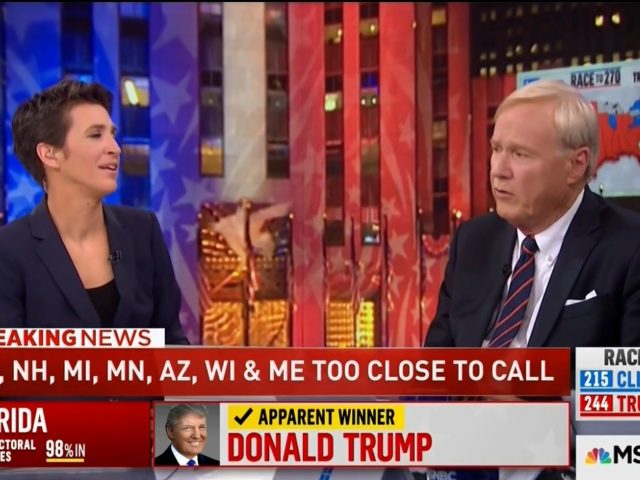 The media invested not just in a Clinton victory but a Trump humiliation.

“Relax, Donald Trump Can’t Win,” a headline at The Nation reassured readers. “Donald Trump Is Poised to Lose in the Biggest Landslide in Modern American History,” Damon Linker wrote at The Week. “I couldn’t find a single [Republican] who now thinks they’re going to win,” Bob Schieffer of CBS told Face the Nation in October. He added, “I’m not sure the Republican Party is going to survive this.”

These and other advertisements for incompetence acted as not just this campaign’s Florida-goes-for-Al-Gore moments, but conveyed the perpetual Pauline Kael-quality (“I can’t believe Nixon won. I don’t know anyone who voted for him.”) of journalists. People broadcasting from Washington, where Hillary Clinton won 93 percent of the vote, and Manhattan, where 87 percent of ballots announced “I’m with Her,” reported with shocked faces that people in other parts of the country cast different ballots than their neighbors.

The pollsters judged a 6.5 advantage for Hillary in Wisconsin. Trump won the state. The surveys similarly showed a comfortable 3.4 margin of victory for the Democrats in Michigan. Trump won the state. Media number-crunchers lost credibility when Hillary lost the presidency. HuffPost Pollster gave Trump a two percent chance of victory. The Upshot from the New York Times saw Clinton enjoying an 85 percent chance to win. FiveThirtyEight.com’s Nate Silver received copious criticism for allowing for a 29 percent chance of a Trump victory. When the men interpreting hard data show soft hearts for this or that candidate, they create candidates, like Donald Trump, who diss and dismiss pollsters and quant nerds. They devalue their profession. Pollsters did that here. So did journalists.

There’s an I’m-rubber-you’re-glue quality to New York magazine putting an unflattering close-up of Donald Trump under the caption “Loser” on its cover. The Dewey-Defeats-Truman of a magazine cover strikes as a microcosm of Election 2016. The slanders hurled against Trump by the media bounced back and stuck to them.

The more the Fourth Estate attempted to discredit the Republican nominee, the more they discredited themselves. A law of diminishing returns governs media bias. Stridency desirous of influencing viewers instead alienates viewers. Journalists told us who they are when they told us who Donald Trump is. And we considered their counsel with this in mind.

Hillary Clinton, who finished her race for the presidency with a lie when her campaign manager vowed to fight just as she called her rival to call it quits, conceded to Donald Trump over the phone before CNN or MSNBC declared a winner in the presidential race. Sometimes those with the most to lose become the last to negotiate a treaty of surrender with reality.