The New Yorker magazine, which considers itself a highbrow intellectual publication, has disinvited former Breitbart News executive chairman and White House adviser Steve Bannon from its upcoming ideas festival in the first weekend of October.

Earlier Sunday, the New York Times had reported that Bannon was to have “headlined” the festival. “Readers of The New Yorker prize the magazine for its wide-ranging collection of perspectives,” the Times reported. It quoted New Yorker editor-in-chief David Remnick standing up for freedom of speech and of the press, promising to bring New Yorker fans a tough debate: ““I have every intention of asking him difficult questions and engaging in a serious and even combative conversation.”

But it turns out that New Yorker readers — and writers — do not “prize” a “wide-ranging collection of perspectives” after all. Nor do the Hollywood celebrities who threatened to boycott the event if Bannon was allowed to appear with Remnick.

In a two-page statement, Remnick tried to explain the decision.

A statement from David Remnick, editor of The New Yorker, explaining his decision to no longer include Steve Bannon in the 2018 New Yorker Festival. pic.twitter.com/opayiw5GQ2

“The reaction on social media was critical and a lot of the dismay and anger was directed at me and my decision to engage him. Some members of the staff, too, reached out to say that they objected to the invitation, particularly the forum of the festival,” Remnick said.

Insisting that he had been a critic of the Trump administration since Election Night, Remnick noted that the main argument against inviting Bannon was that doing so would give a platform “and that he will use it, unfiltered, to propel the ‘ideas’ of white nationalism, racism, anti-Semitism, and illiberalism.”

Bannon has never expressed any support for those ideas, but Remick did not point that out. Instead, he argued that Bannon was hardly an obscure figure who needed another platform. He also continued to have influence on the White House, Remnick argued, and was important to question publicly for that reason as well.

“The point of an interview, a rigorous interview, particularly in a case like this, is to put pressure on the views of the person being questioned,” Remnick explained.

However, he continued, he had decided to disinvite Bannon — hoping to interview him “in a more traditionally journalistic setting” at some future date.

Remnick did not explain why Bannon would ever speak to his magazine again after being disinvited.

Update: Breitbart News has obtained the invitation sent by the New Yorker to Bannon: “We would be honored to have you.” 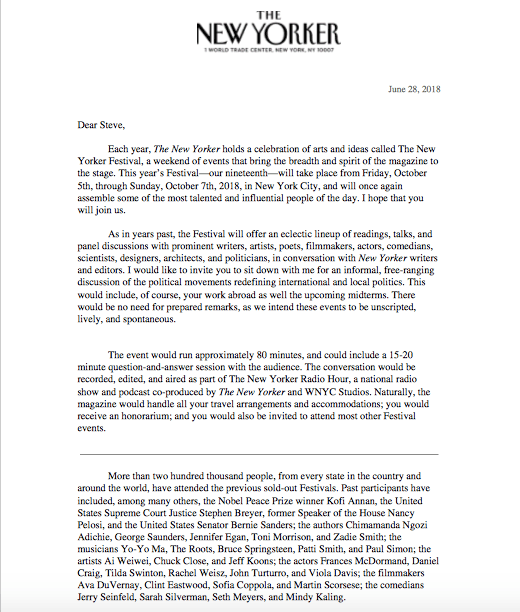 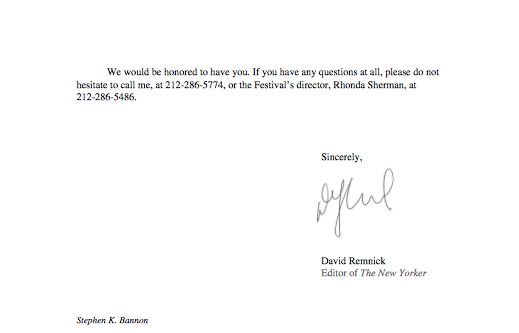 Bannon also provided a quote to Breitbart News: “After being contacted several months ago and with seven weeks of continual requests for this event, I accepted The New Yorker’s invitation with no thought of an honorarium. The reason for my acceptance was simple: I would be facing one of the most fearless journalists of his generation. In what I would call a defining moment, David Remnick showed he was gutless when confronted by the howling online mob.”