The New Yorker’s Philip Gourevitch would apparently like “to find out” what America would look like if President Trump was stricken with the coronavirus.

Using his verified account, Gourevitch responded with “only one way to find out”: 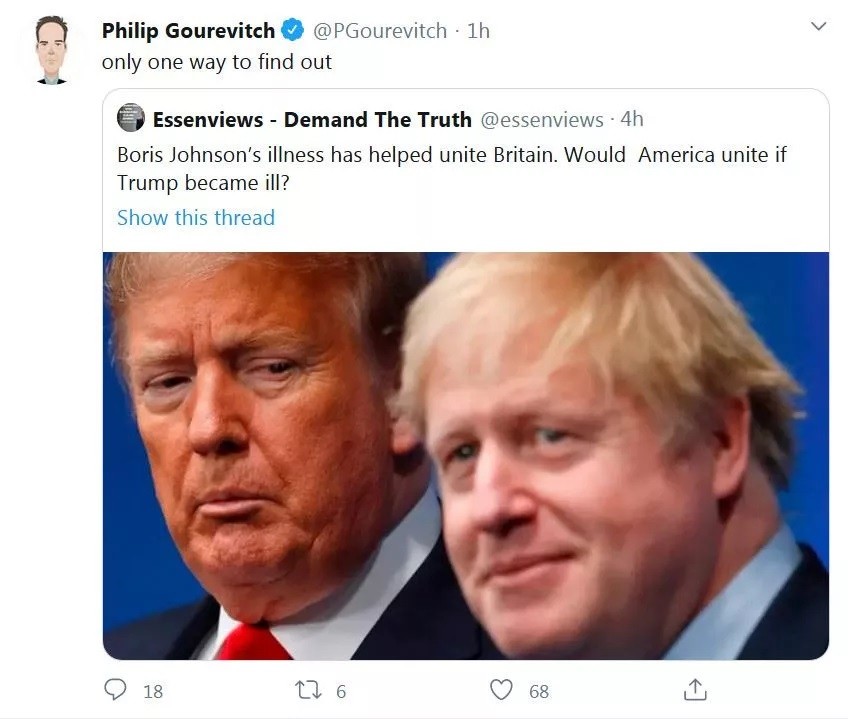 This is just one more example of the establishment media exposing its sociopathy during this pandemic.

And look at how much the rules have changed.

During President Obama’s failed administration, a nobody rodeo clown was personally destroyed by the corporate media for wearing an Obama mask. Today, however, it is perfectly acceptable to “joke” about the American president getting hit with a virus that is especially fatal to men in the president’s age group.

This newly-revealed sociopathy does not only extend to the president, but also the American people as a whole.

For purely partisan reasons, the corporate media have spent the last few weeks actively discouraging coronavirus sufferers from seeking out anti-malaria drugs, such as hydroxychloroquine, that appear to help some coronavirus sufferers. As long as you take the prescription drug with the approval of your doctor to avoid any potential side effects, it is perfectly safe. Millions have been taking it safely for decades and the FDA just approved it for emergency use with the China virus. But…

Because Trump has touted the drug, and because the sociopathic media desperately want to see an increased death count in the hope it will hurt Trump politically, these sociopaths are actively campaigning against hydroxychloroquine, which is pure madness.

And now this sociopathy is so accepted in the elite media that Gourevitch feels perfectly safe “joking” about the president of the United States being stricken with a deadly disease and insinuating this would be good for the country and would bring us together.

Just don’t call the media the enemy of the people. That would be wrong.