Remember Afghanistan? The Main Stream Media doesn’t want you to because it could hurt Joe Biden. So it’s doing its best to change the subject.

Oh sure, the MSM pounded on the president for a couple weeks. The collapse of Afghanistan was, after all, an epic humiliation for the Biden administration and a stain on the United States. In fact, the debacle was so bad that all the armchair warriors at CNN, the Washington Post, and other MSM outlets were able to play military expert again, and they got Biden good.

Indeed, maybe just this once, let’s agree with the MSM: The withdrawal was a fiasco and a tragic one at that.

And yet now, after its blitz of criticism, the MSM looks up and realizes that Biden’s approval rating has fallen ten points. His approval is now in the mid 40s, lower than his disapproval rating. And presidents with underwater approval ratings tend not to get re-elected. 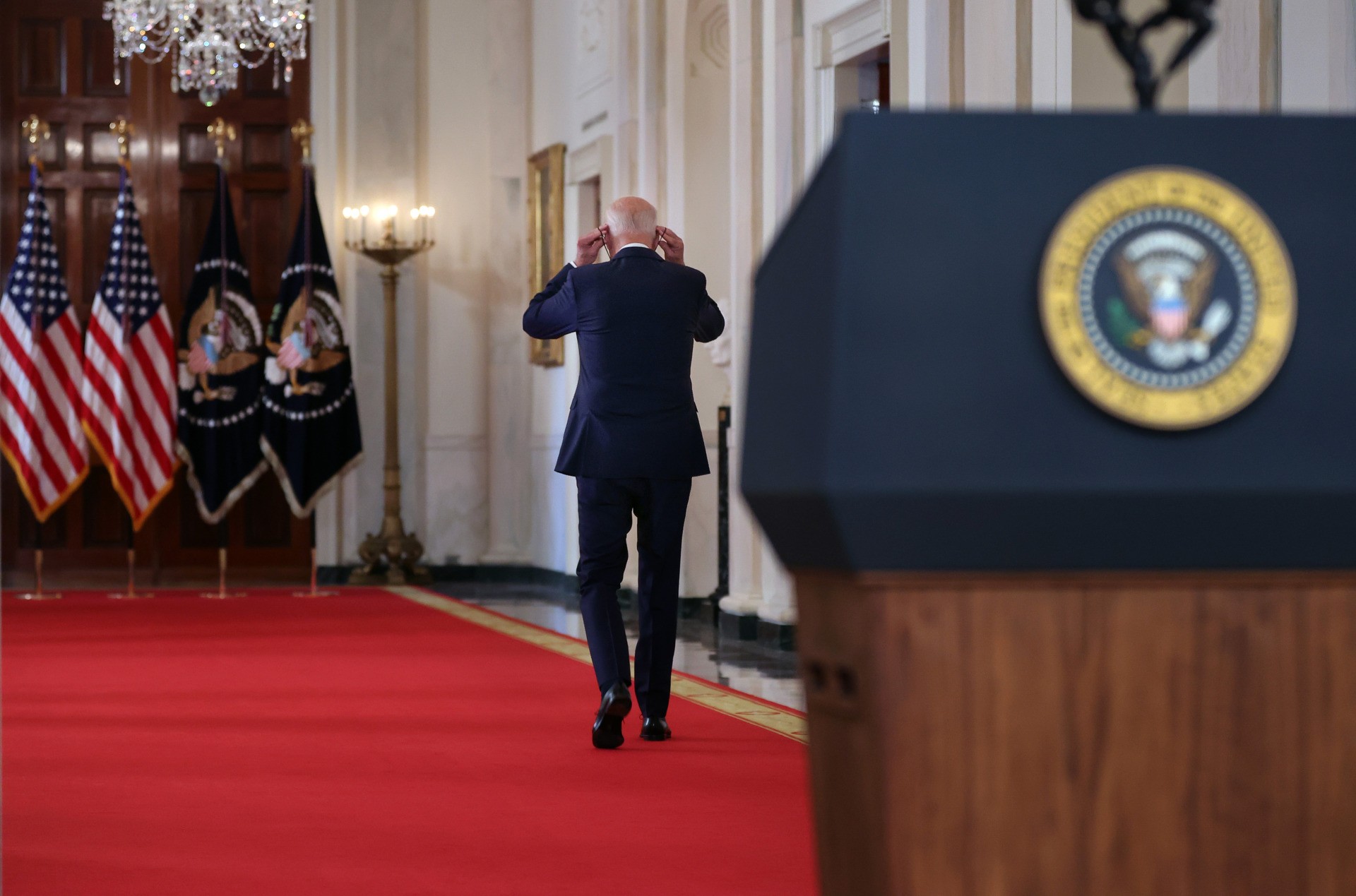 President Joe Biden departs after delivering remarks on the end of the war in Afghanistan at the White House on August 31, 2021. (Chip Somodevilla/Getty Images) 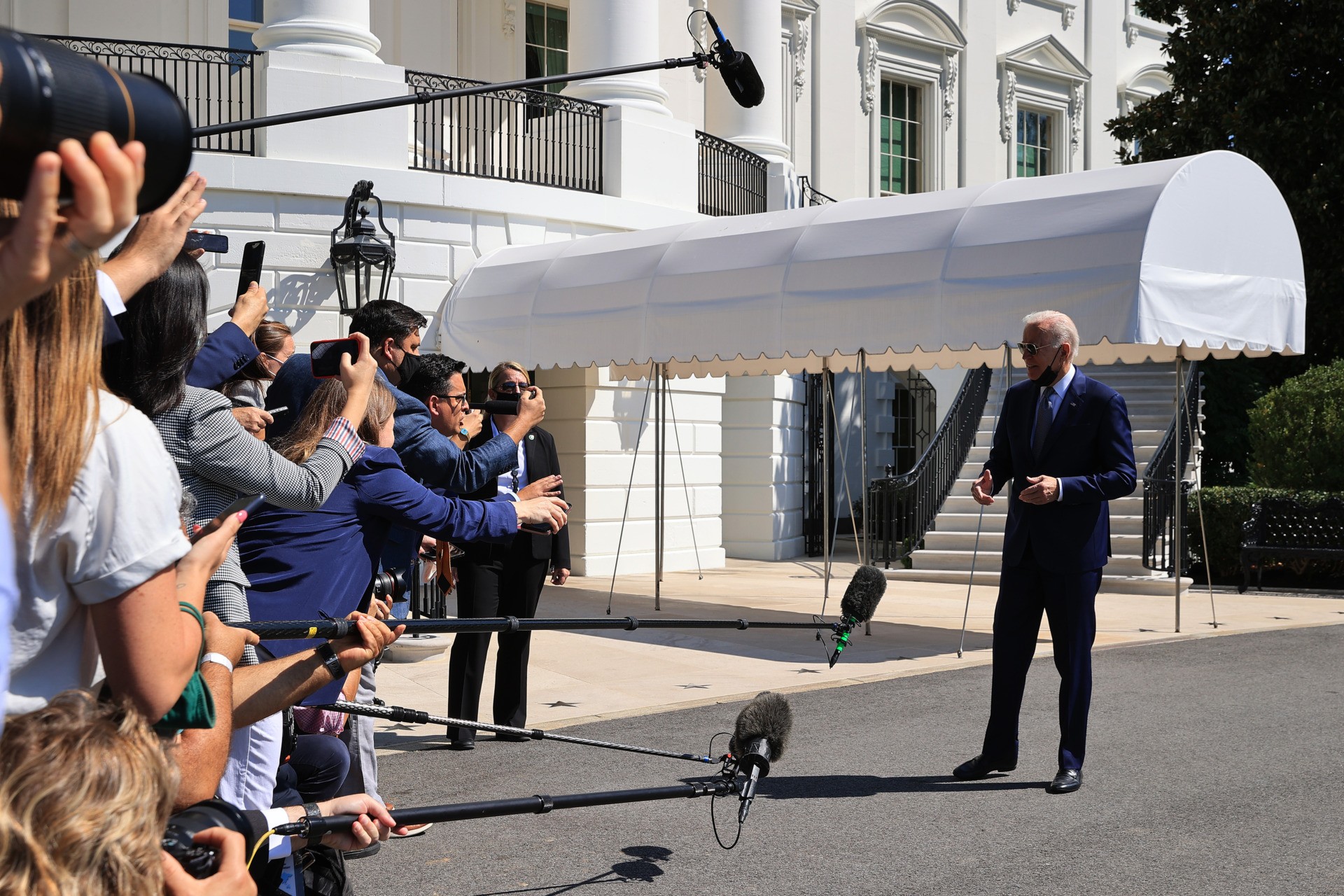 President Joe Biden talks briefly to reporters before boarding Marine One on the South Lawn of the White House on September 03, 2021. (Chip Somodevilla/Getty Images)

Moreover, mere speculation that Donald Trump might be running for president in 2024 has clarified the MSM mind. The Fourth Estate might not be so in love with Biden anymore (we’ll see fewer gooey “news stories” on his ice cream cones), and yet it has come to realize that if it keeps trashing Biden, the dreaded Trump could return to the White House. And then the MSM would hate itself in the morning—and for a long time after that.

So what’s the MSM to do? How to help Biden and stave off Trump or any other Republican? Answer: Change the subject!

On September 1, after the Supreme Court refused to block the statute, NBC Nightly News, to cite just one media outlet, led its broadcast with four segments on Hurricane Ida and then ran the Texas abortion story. Only after that did NBC run a single brief story on Afghanistan. And the following day, September 2, NBC Nightly News rehashed the previous day’s story on Texas—using some of the same video footage—and totally blanked out Afghanistan.

Indeed, on the night of September 2, this author glanced at his iPhone and saw that the first four stories from the Washington Post were about the Texas abortion law. And then, on September 3’s edition of Nightly News, there was nothing on Afghanistan. (NBC did find time, however, for an admiring story on Critical Race Theory.)

For its part, the White House sees the benefit of changing the subject. It would rather attack the Texas law than defend what it did in Afghanistan. After all, Planned Parenthood and other abortion lobbyists are huge players in the Democratic Party, and tens of millions of ordinary Democrats count themselves as “pro-choice.” So when Joe Biden defends abortion, he is rallying the Democratic base. And so Biden has every reason to rail against “an unprecedented assault on a woman’s constitutional rights.” He further pledged to launch a “whole-of-government” effort to protect abortion. (Some might wonder if things in Kabul would have turned out better if Biden had been equally focused on Afghanistan.)

And on the morning of September 3, the buzzy Beltway blat Axios led its news roundup with this headline: “1 big thing: Biden wants abortion fight.” In the words of reporter Mike Allen: “President Biden is eager for a fight over abortion—an issue he sees as politically advantageous.” Allen added, “The White House sees abortion as a potent issue ahead of next year’s midterms, with Biden under huge pressure on Afghanistan, inflation, crime and the border.”  Why yes, when one puts it that way, Biden would rather talk about abortion than a lot of topics.

Adding further perspective to the White House calculus, veteran political analysts Stuart Rothenberg tweeted, “Which is more likely to be a decisive electoral issue in 2022, Afghanistan or abortion rights?  You don’t need me to tell you.  It ain’t Afghanistan.”

Which is more likely to be a decisive electoral issue in 2022, Afghanistan or abortion rights? You don’t need me to tell you. It ain’t Afghanistan.

We can add that the Texas abortion law has plenty of support, and that the Right to Life movement overall is strong. And yet Biden would rather talk about just about anything other than Afghanistan.

To be sure, there’s a lot of reckoning to be done about Afghanistan; plenty of questions need to be answered—and quite likely, a lot of people should be relieved of their duties, both military and civilian.  And yes, a few thousand American families will continue to mourn their loved ones.

Yet for the time being, Biden has arrived at a smart enough strategy: change the subject. And the MSM is happy to help; after all, journos pride themselves on their ability to “create the narrative.”

Now some might wonder: Can reporters and pundits really work together like that? Probably every Breitbart News reader has an answer to such a question. And yet still, it’s interesting to look back on the history of collective media consciousness.

It’s been called “the Hive”—as in hive-mind.

According to the American Spectator, the phrase originated back in 1981. In that year, the late journalist Tom Bethell wrote of the Hive, “Left-wing individuals and organizations have disguised their agenda by adopting a new system of communication.”  Bethell added, “bees in a hive don’t ‘talk’ to one another, but they do have an effective system of communication, and they all work toward a common goal, different bees performing different functions.” In other words, the MSM is so like-minded that it just knows what it’s supposed to do—and so it does it.

So maybe that’s what’s happening now. The Hive has been alerted: the new line is talking about abortion. (As well as, of course, always blasting Trump.) 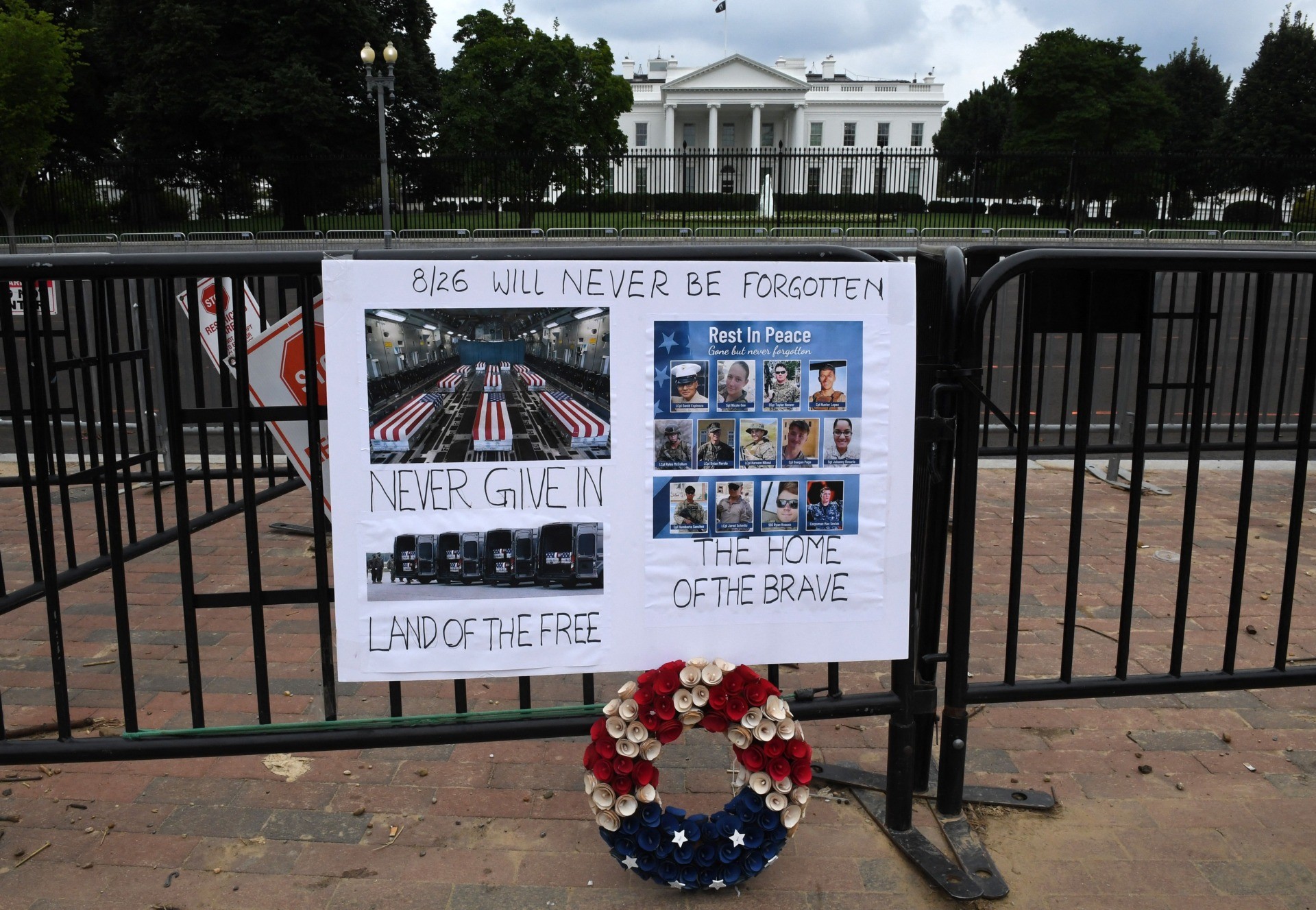 A makeshift memorial for the 13 members of the U.S. military killed in Afghanistan is seen outside the White House on August 31, 2021. (OLIVIER DOULIERY/AFP via Getty Images) 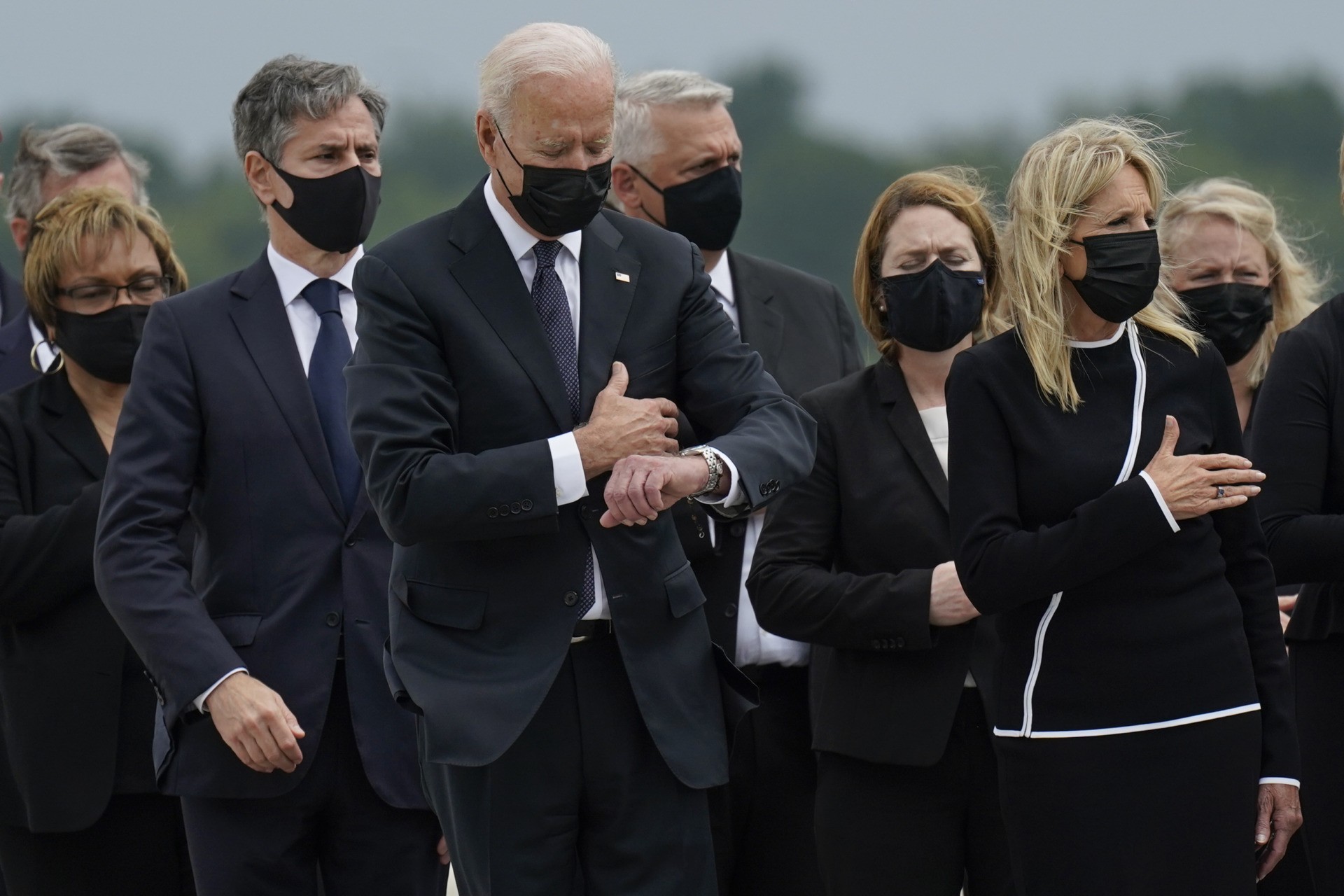 President Joe Biden checks his watch during a ceremony on August 29, 2021, at Dover Air Force Base for the transfer of the remains of the U.S.  servicemembers killed in Afghanistan. (AP Photo/Carolyn Kaster)

To be sure, Afghanistan has hardly disappeared from the news, and yet barring some catastrophe so huge that it can’t be ignored, the MSM will be reporting a lot less about that country and also less about the worldwide diaspora of Afghan refugees.

And so it will be left to reporters outside of the Hive—such as Breitbart News’ Kristina Wong—to pursue leads that don’t fit the Hive/MSM storyline. As Wong tweeted on September 2, “EUCOM Commander says said 58 individuals evacuated from Afghanistan have ‘popped red’ during screening and require further processing.” (EUCOM, of course, is the Pentagon’s European Command, which includes the giant Ramstein Air Force Base, which many Afghans are passing through on their way to the U.S.)

Okay, so the Hive has assembled to protect its current queen bee, Biden.  And so it clicks, whirs, and waggles about abortion.

Of course, there is just one thing: The Afghanistan issue there and here hasn’t gone away.