The Jerusalem Post used a stock photograph of a flaming swastika and white youths giving a Nazi salute to accompany an article on Sep. 10 about Republican Vernon Jones, who is running for governor in Georgia and also happens to be black. 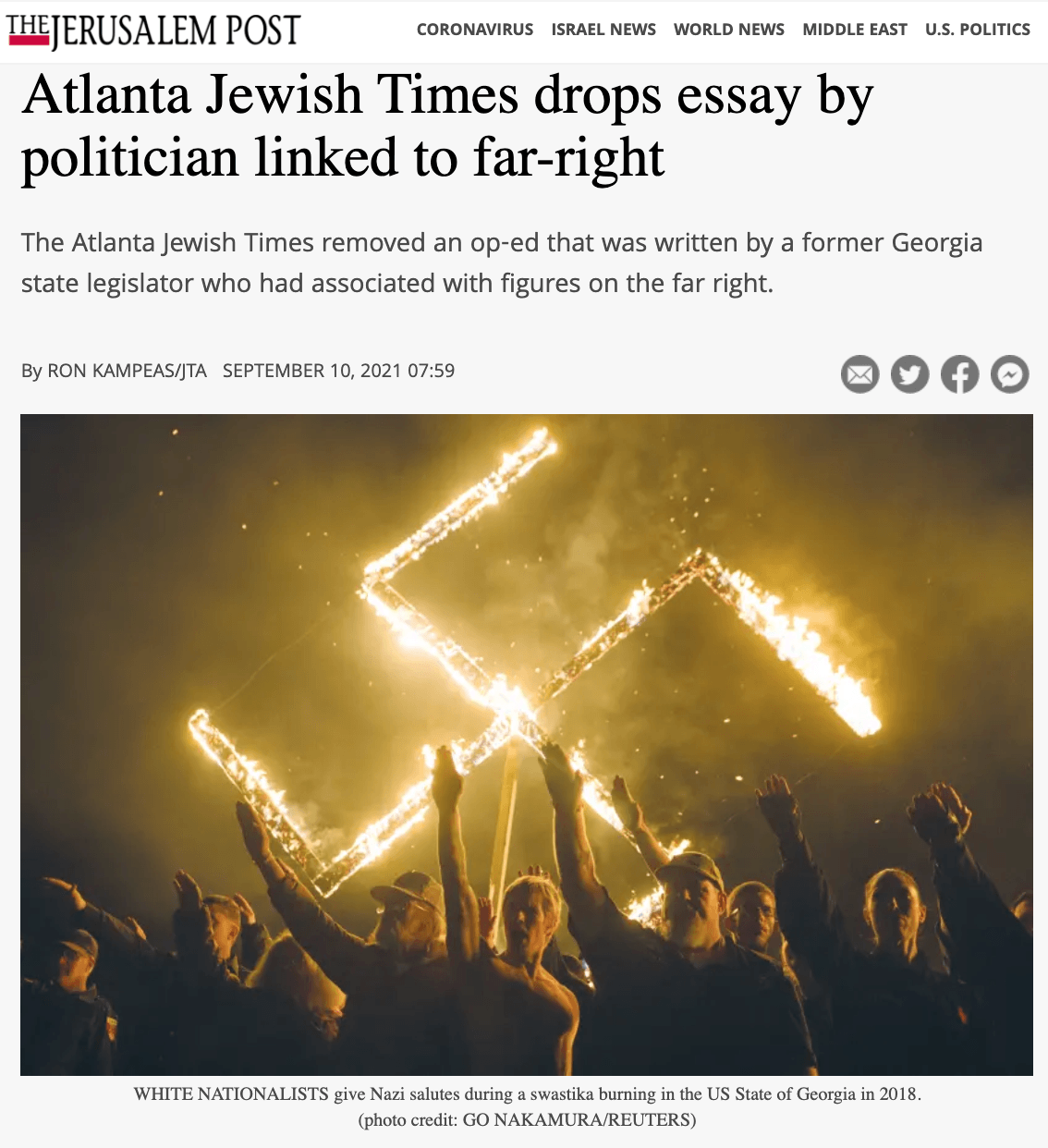 (Update: The Post replaced the swastika photograph with a photograph of Jones, following publication of this article.)

The article, by Ron Kampeas of the Jewish Telegraphic Agency wire service, described how a local Atlanta Jewish news outlet was pressured by leftists to drop an op-ed by Jones expressing solidarity with the Jewish community and Israel.

The Atlanta Jewish Times‘ supposed reasons for dropping the article were the newspapers’ supposed policy against partisan political articles, and an allegation that Jones had associated himself with white supremacists at a protest against the 2020 election results. The paper’s leadership blamed junior staffers, and the rush of the High Holidays, for the supposed mistake:

I would like to apologize for publishing the essay submitted from Rep. Vernon Jones, as a holiday community message. We have recently hired new editorial staff, and with the hustle and bustle of the Jewish holidays the essay from this political figure made our holiday pages. pic.twitter.com/zu24ACqGkl

The headline of Kampeas’s piece is “Atlanta Jewish Times drops essay by politician linked to far-right,” though Jones, a former Democrat-turned-Republican, is hardly a far-right figure, and the “link” is completely spurious.

Kampeas noted that a left-wing activist, Marisa Pyle, claimed without evidence that Jones had held “multiple rallies” with white supremacists.

Literally during the Days of Awe, @AtlJewishTimes is platforming a far-right extremist who held multiple rallies *LAST YEAR* with antisemites Alex Jones and holocaust denier Nick Fuentes, along with the head of the Proud Boys and other white supremacists. Disgusting. pic.twitter.com/NXMWWm7mOc

Kampeas noted that “appeared at a rally last year at the Georgia Capitol protesting recounts that affirmed that Joe Biden had beaten incumbent Donald Trump in the state’s presidential count. Some of the extremists named by Pyle also attended the rally.”

A subsequent investigation by David Israel in the independent Jewish Press found the only report of Jones being “with” the extremists at the rally was of him asking them to leave the Georgia state capitol building in a peaceful manner: “I watched the tape, Jones is seen asking the demonstrators to file out and respect the police that gave them permission to associate there in the first place. If there were more events like this one, ‘multiple rallies,’ according to Pyle, I need to see them.”

The Jewish Press and Newsmax published versions of Jones’s op-ed, describing how one Jewish family helped shape his values and views on Israel:

Jewish communities have positively impacted my life for as long as I can remember. It started when I was just a child. I was raised with my siblings in the small town of Laurinburg, North Carolina. My parents were farmers who did their best to provide for us. We never had the best luxuries in life, but they ensured that we had food in our bellies and shirts on our backs. Laurinburg was also home to the Risks, a kind Jewish family that settled down near us. The Risk family owned a merchant store in town, which was common for small rural communities at the time.

Despite my parents being simple farmers, Mr. and Mrs. Risk always treated them with the utmost respect. Our church clothes were usually hand-me-downs, but when we grew out of those and my parents had to buy new dress clothes, they would take us to the Risk family’s store. When Mr. Risk would take my measurements, he made me feel special. And when our parents couldn’t afford the clothes, Mr. Risk would tell them to just pay their debts when they could afford it. This generosity meant so much to us, and I have never forgotten the Risk family’s kindness or the moments we shared.

In fact, my bond with them is one of the reasons why I pushed to recognize Jewish heritage in my time as Chief Elected Official of DeKalb County. Soon after I was elected to the office, I established an annual Holocaust commemorative service in DeKalb County to honor our Jewish communities and the journeys that they made to reach the United States. We must recognize the atrocities that occurred in the past and ensure that similar events never happen again. Too many Americans in the 21st century have no idea of the true horrors that Jewish communities suffered under the terror of Nazi occupation, and we must educate future generations so that history does not repeat itself.

The flaming swastika combines the traditional Nazi twisted cross with the Ku Klux Klan symbol of a burning cross. As of Sunday morning, Sep. 12, the offending photograph is still up on the Jerusalem Post‘s website.