The far-left New York Times published a report that, among other falsehoods, claimed some 900,000 children have been hospitalized for the coronavirus.

The Times was forced to issue a correction.

The so-called reporter responsible for this irresponsible error is a woman named Apoorva Mandavilli. This close-minded, incurious woketard once used her verified Twitter account to declare the Wuhan lab leak theory “racist.” But, of course, we now know that the lab leak theory is the most likely explanation for the spread of the coronavirus, and we know it despite so-called reporters, like Mandavilli, who put woke and narrative above truth, reality, commons sense, and journalistic curiosity.

Can someone explain to me why it's racist to wonder if a virus escaped from a Chinese lab, but it's not racist to insist that it infected humans because of Chinese wet markets? If anything, isn't the latter more racist?

Also, isn't the relevant question: *what happened*? Or no? pic.twitter.com/vSqqJnehf7

The Times article in question, “A New Vaccine Strategy for Children: Just One Dose, for Now,” ran on Wednesday and told its gullible readers, “nearly 900,000 children have been hospitalized with Covid-19 since the pandemic began, and about 520 have died.”

It took a whole day for the Times to correct its unforgivable mistake. The article now reads, “63,000 children were hospitalized with Covid-19 from August 2020 to October 2021, and at least 520 have died.”

A correction was also added at the bottom of the article, and not just for the 900,000 number. Gullible Times’ readers were hit with a total of three corrections:

[1] An earlier version of this article incorrectly described actions taken by regulators in Sweden and Denmark. They have halted use of the Moderna vaccine in children; they have not begun offering single doses. [2] The article also misstated the number of Covid hospitalizations in U.S. children. It is more than 63,000 from August 2020 to October 2021, not 900,000 since the beginning of the pandemic. [3] In addition, the article misstated the timing of an F.D.A. meeting on authorization of the Pfizer-BioNTech vaccine for children. It is later this month, not next week.

Nowhere does the Times explain where that ridiculous 900,000 number came from.

Have you noticed how these “errors” only ever happen one way, and that’s in the direction of furthering the left-wing narrative?

That’s how we know these are not honest errors or simple oopsies. If they were genuine errors and simple oopsies, every once in a while, an error would be reported by the fake media that goes against the left-wing cause. 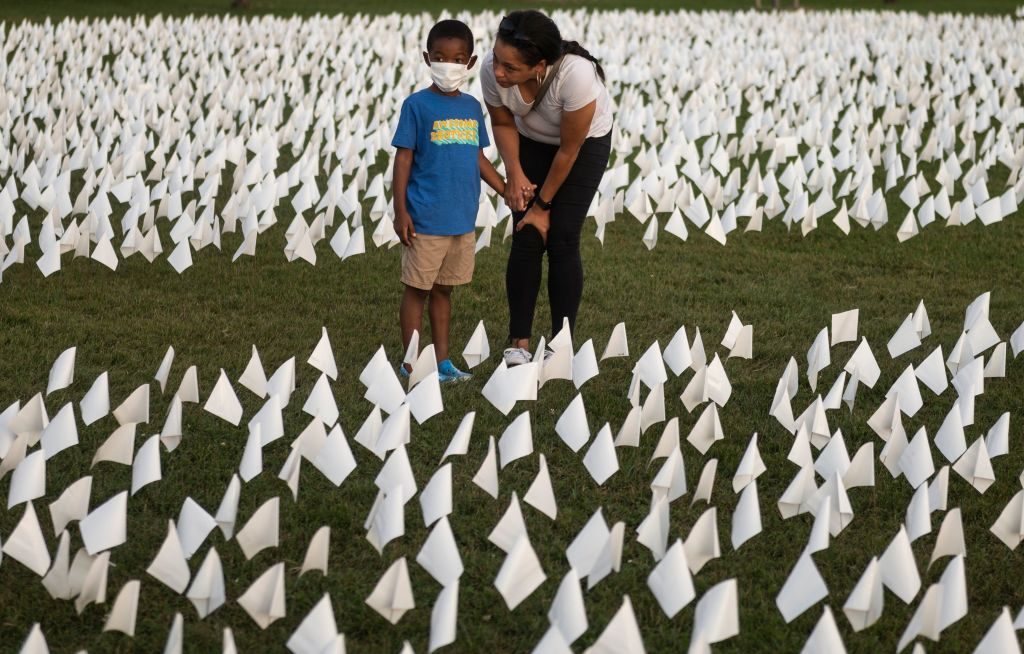 A mother talks to her son in a field of white flags on the Mall near the Washington Monument in Washington, DC on September 18, 2021. The project, by artist Suzanne Brennan Firstenberg, uses over 600,000 miniature white flags to symbolize the lives lost to Covid-19 in the US. (ANDREW CABALLERO-REYNOLDS/AFP via Getty Images)

Also missing, and still missing from this New York Times piece, is some context. Despite my best efforts, I could not find the numbers, but before we launch what will be a very divisive policy of vaccinating children, I’d like to know how the coronavirus death and hospitalization rates for those 12 and under compares to the common flu. This is journalism 101, which is no longer practiced, especially at the New York Times.

It’s also worth mentioning that, back in February, the Times fired its previous coronavirus reporter, Donald McNeil, a 45-year veteran. His sin? Two whole years ago, and in an academic way to answer a student’s question, he uttered the N-word.

As far as I know, McNeil’s coverage of the China Flu never required a correction, much less three corrections. But woketards aren’t hired on merit. They’re hired because they put the fascist, left-wing cause above truth, accuracy, and intellectual curiosity.