Former Vice President Joe Biden downplayed his position on civil rights during a swing through Alabama in 1986 in preparation for his first presidential run.

Biden, who in recent days has come under fire for his praise of two ardent segregationists, made an avid play for the South during his 1988 White House campaign. Breitbart News has obtained a newspaper clipping showing how that strategy unfolded during a trip Biden made to Birmingham, Alabama, in March 1986: 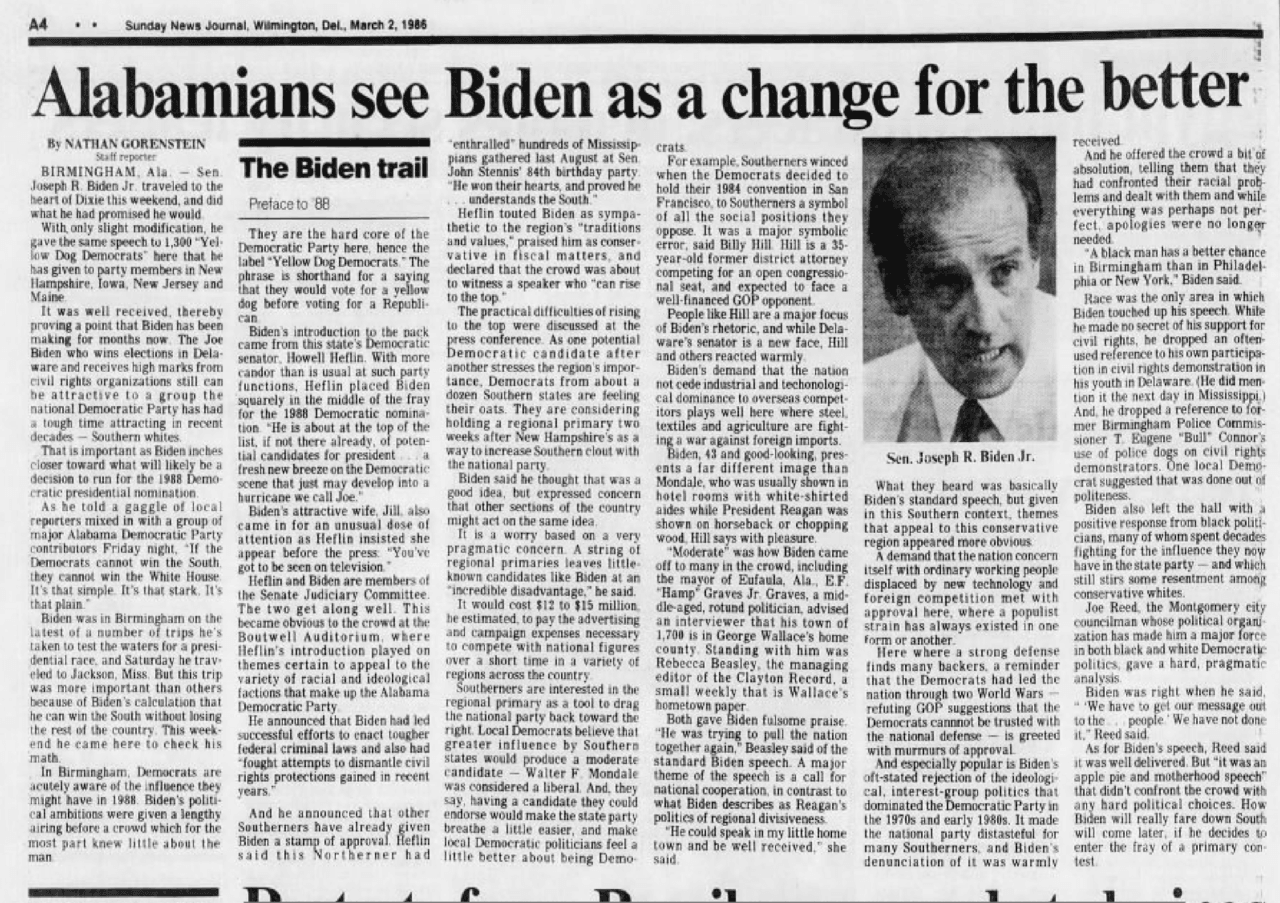 At the time, the South was still nominally Democrat, but had gone overwhelmingly for President Ronald Reagan in the 1980 and 1984 elections. Biden appeared to believe his youth and moderation presented the best opportunity to bring Southern whites back into the Democrat Party’s fold.

Officially, Biden had journeyed to the state to keynote the Alabama Democrat Party’s annual Jefferson Jackson Day Dinner. The visit, however, was widely seen as an informal testing of the presidential waters.

At the dinner, Biden was lauded by then-colleague Sen. Howell Heflin (D-AL) as a man “who understands the South” in front of the 1,300 “Yellow Dog Democrats” gathered. Heflin began his introduction by noting that Biden had fought for both tougher crime laws and against “attempts to dismantle civil rights protection gained in recent years.” He described how Biden had already “enthralled” Southerners in 1985 with his tribute to then-Sen. John Stennis, an ardent segregationist, at a celebration of his 84th birthday.

Biden’s speech on that occasion had already elicited criticism from segments of the African American community. Many felt that in hailing Stennis as a friend and mentor, even comparing his “integrity” to the likes Confederate General Stonewall Jackson, Biden was dismissing the man’s longstanding opposition to civil rights and integration.

Heflin didn’t mention any of that, instead telling the audience that Biden had “won their hearts and proved he… understands the South.”

When it was his turn to speak, Biden delivered his “standard” stump speech, albeit with some portions “touched up” for the southern audience.

According to the Delaware News Journal, Biden recited the same notes—bipartisanship, the plight of workers “displaced by new technology and foreign competition,” and the need for campaign finance reform—that he told Democrats in “New Hampshire, Iowa, New Jersey, and Maine.” It was on the topic of race and civil rights that the remarks deviated from his usual stump speech.

“He offered the crowd a bit of absolution,” the Journal reported, “telling them that they had confronted their racial problems and dealt with them and while everything was perhaps not perfect, apologies were no longer need.

“A Black man has a better chance in Birmingham than in Philadelphia or New York,” Biden told the audience.

“While he made no secret of his support for civil rights,” according to the Journal report, “he dropped an often used reference to his own participation in civil rights demonstrations in his youth in Delaware.”

Biden also removed mentions of Birmingham Police Chief “Bull” Connor’s use of police dogs and fire hoses on civil rights protesters during Martin Luther King, Jr.’s protest in the city in 1963. His refrain was likely out of “politeness” to his hosts, according to local Democrat attending the event.

Ironically by not mentioning civil rights in Alabama, Biden sidestepped an issue that would be partially responsible for dashing his White House ambitions, at least in 1988.

Although, initially seen as a top contender, Biden’s first presidential run unraveled amid a slew of scandals, including revelations he engaged in widespread plagiarism and falsely claimed to have marched in the Civil Rights Movement.

“When I marched in the civil rights movement, I did not march with a 12-point program,” Biden said in New Hampshire in February 1987, according to a report by the New York Times comparing the mistakes of his failed 1988 campaign and his 2020 campaign. “I marched with tens of thousands of others to change attitudes. And we changed attitudes.”

Biden’s remarks to the Alabama Democrat Party come to light as the former vice president reels in the fall out of praising the late-Sens. James Eastland (D-MS) and Herman Talmadge (D-GA) at a fundraising event on Tuesday. Both men, like Stennis, were ardent segregationists who opposed civil rights for the majority of their political careers.

Biden inadvertently made the situation worse by standing defiant when called on to apologize by his fellow Democrat presidential candidates. The incident and Biden’s response only served to underscore the former vice president’s tumultuous history on race.

Breitbart News reported this month that Biden made a series of racially insensitive remarks, including lecturing on what “was good for the Negro,” in the early 1970s. One of those statements came after the passing of his first wife, Neilia Biden.

“I was probably one of those phony liberals… the kind that go out of their way to be nice to a minority and she made me realize I was making a distinction,” Biden said in December 1972. “But in dealing with minorities, she made no subtle condescending gestures… she made no distinctions.”