Iowans will go their caucus locations to kick off the 2020 presidential election as Democrats desperately try to find a candidate who can beat President Donald Trump.

Sorry I was right. RIP caucuses. And after the GOP fiasco of 2012, Iowa probably shouldn’t even try. #iacaucus https://t.co/0mE6uIVWIT

1:47 AM: Biden campaign manager: “Tonight was a great night for us.”

Tonight was a great night for us. We are thrilled with our performance across the state. We believe we will emerge with the delegates we need to continue on our path to make Joe Biden the Democratic nominee. pic.twitter.com/xiHrYsRfmF

Iowa county Democratic party chairman to me on the future of the caucuses:

"There were 49 other states saying why does Iowa get to do this?… And now we just poured a gallon on kerosene on what was a shouldering ember.”

It might be helpful to have a President and government that understand technology so this sort of thing doesn’t happen.

They did not expect the phone hold times, and were anxious to get their results in. So his county executive director took pictures of their results pages on her phone and drove them over to the Iowa Democratic Party headquarters.

But when she got there, she was turned away.

Did Pete Buttigieg just claim victory in Iowa when the results haven’t been announced yet?

Somebody finished fourth tonight. For that candidate, this reporting delay is like waking up to snowstorm on the day of a test you forgot to study for.

12:35 AM: Buttigieg opening himself up to mockery:

Buttigieg is speaking with four black women behind him pic.twitter.com/6RcpvgYWNF

I understand the value of the optics of placing more black voters behind Buttigieg given how he has struggled with the black vote. But putting six (more?) in a row on the first row — in Iowa — may just draw more questions & suspicions than change minds.

* Pete Buttigieg polling at or near 0% with Black people"

Campaign staff: "Okay, so here's what we're going to do…" pic.twitter.com/XaPLL1gn2P

Democratic campaign staffers tell me the Iowa Democrats hung up on them during a conference call intended for updates about results.

The Iowa Dems have not returned my request for comment

.@ewarren's campaign manager @RogerLau: "Every single second that passes that we don't get a result, I think it's concerning."

But he said he's confident Warren, Buttigieg and Sanders are close at the top.

"I believe the VP's a distant 4th based on the at a we have."

12:23 AM: Buttigieg says Iowa has “shocked the nation” even though they do not know all of the results because, “by all indications, we are going on to New Hampshire victorious.” Everybody claims a “win.”

The official results as Pete Buttigieg declares himself victorious in Iowa: pic.twitter.com/isUMd4lxgM

“Tonight is for every undocumented, unafraid organizer and volunteer who proudly knocked on doors to let the world know that the path to progress runs through courage, not fear.” @ewarren. #IowaCaucuses #iowacaucus2020

CBS News asked @MikeBloomberg — who is campaigning in California during the Iowa Caucuses — about his feud with President Trump, and whether people want to see two billionaires fighting on Twitter.

Bloomberg: "Two billionaires? Who's the second one?" pic.twitter.com/UYGENHauKw

Has anyone blamed Russia yet? #IowaCaucuses #2020

Some folks will assume the Russians are involved here …

DSM – @AndrewYang takes the stage. “We saw that tens of thousands of Iowans realize that the economy is transforming around them in profound ways.” pic.twitter.com/B7YCwueEkE

Big WIN for us in Iowa tonight. Thank you!

11:45 PM: Sanders now taking the stage, says “today marks the beginning of the end of the Donald Trump, the most dangerous president in modern American history.”

“When those results are announced, I have a good feeling. We're going to be doing very very well.” –@BernieSanders at his Iowa Caucus Party. pic.twitter.com/bONUvkc3Go

11:32 PM: Flashback to ballot-counting during 2012 Iowa GOP caucuses that screwed Santorum out of getting a “win” in the critical news cycles right after.

11:31 PM: Biden trying his best to look like a winner on stage. Warren trying to bigfoot him. Cable networks airing Biden.

At her Iowa caucus party, Warren references Trump’s State of the Union speech tomorrow: “Next year, our union will be stronger than ever when that one man is replaced by a very persistent woman.”

Biden is still #1 on the MSNBC leaderboard with zero percent in. Why?

NEW: Executives at MSNBC's parent company, Comcast, have given 94% of their Democratic primary contributions to Joe Biden. https://t.co/WVyopAizTS

1:26 PM: New statement from IA Dems. Looks like they will have to use “photos of results and a paper trail” to validate results.

1:25 PM: Biden preparing to get on camera as well:

Being told Joe Biden will be speaking soon…

"I have the information with me, and I will call it in tomorrow morning." – Des Moines County (eastern Iowa) party chair, on air with us.

11:19 PM: Klobuchar first on television. She says her heart is full because she is punching above her weight despite not knowing the final results.

Just as an FYI, Bernie's people planned for this and developed their own app for logging results. Assuming the precinct captains are inputting information, Bernie's camp should have accurate numbers even if no one else does. https://t.co/OkeXQr2tI4

This is in a working-class precinct of West Des Moines. Bernie Sanders leads initial count: https://t.co/XuGAc5QmwV

First announcement at Buttigieg's caucus night party: "If you are the driver of a silver Mercedes, please move your vehicle from the sidewalk or it will be towed."

The whole idea of the caucus has failed to meet the viability threshold. #IowaCaucuses @CNN @AC360 #CNNElection pic.twitter.com/6JU0zBRg9x

Thank you Iowa for making the best case against Iowa. https://t.co/xVIGufOsV9

David Plouffe on MSNBC: "We may be witnessing the last Iowa caucus."

For Democratic staffers, criticizing the Iowa caucus has long been a third rail. We know it needs to change, but we’re too afraid to say it publicly. 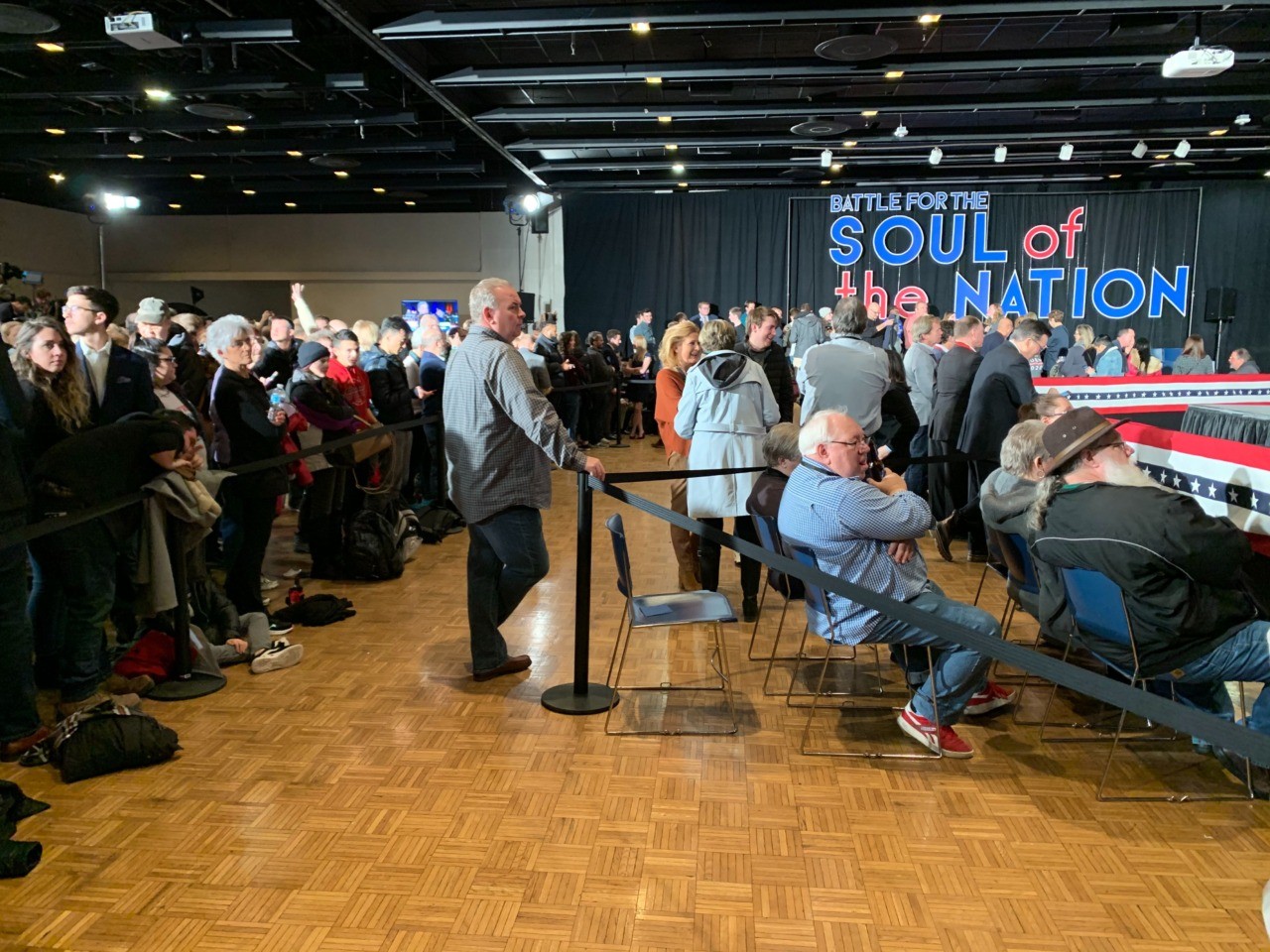 In second alignment, @PeteButtigieg picks up 31, @amyklobuchar picks up 27, @ewarren picks up 21, @BernieSanders picks up 16. Warren wins overall with 33%; Bernie has 23%; Pete has 21%; Amy has 19%. Just one precinct, one Warren visited personally, but tells a story #IowaCaucuses https://t.co/VZzvTm4aHO

With less than 2 minutes to go in the first round, a chanting war erupted in this #IowaCaucus #2020 pic.twitter.com/XZCtRqkds6

WATCH: Biden camp in Cedar Falls caucus is "not viable." #IowaCaucuses #Decision2020@trymainelee: "Not a total surprise. But just seems so dim." pic.twitter.com/a3FJlYlqjL

Summary of arguments inside my #IowaCaucus #2020:

“Is there a representative of the Bloomberg campaign…?” #IowaCaucuses #2020 pic.twitter.com/Bx9l16gMHd

He's worth $60 billion.
He makes $2 billion a year off that.
He's using this year's $2 billion to buy the presidency.
He just bought his way onto debate stage.

8:42 PM: In late 2003, John Edwards debuted his “two Americas” speech and surged in Iowa. What Yang lacked was a “closing argument” speech in the final days/weeks of the campaign to convince voters who did not think he could win and didn’t want to waste their votes to vote with their hearts. His stump speech basically remained the same. An opportunity missed.

8:25 PM: From Joel in Iowa: Warren makes her pitch 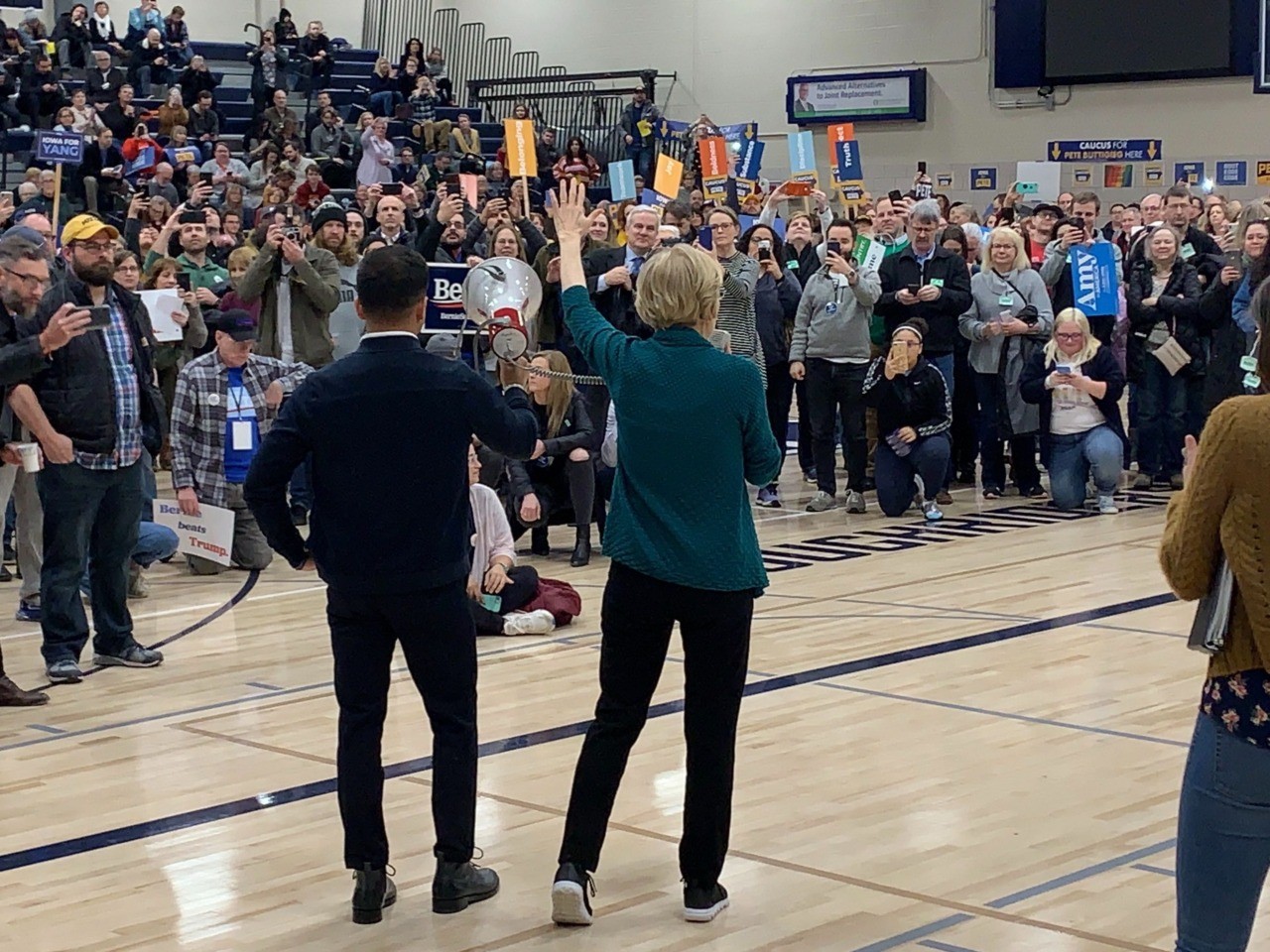 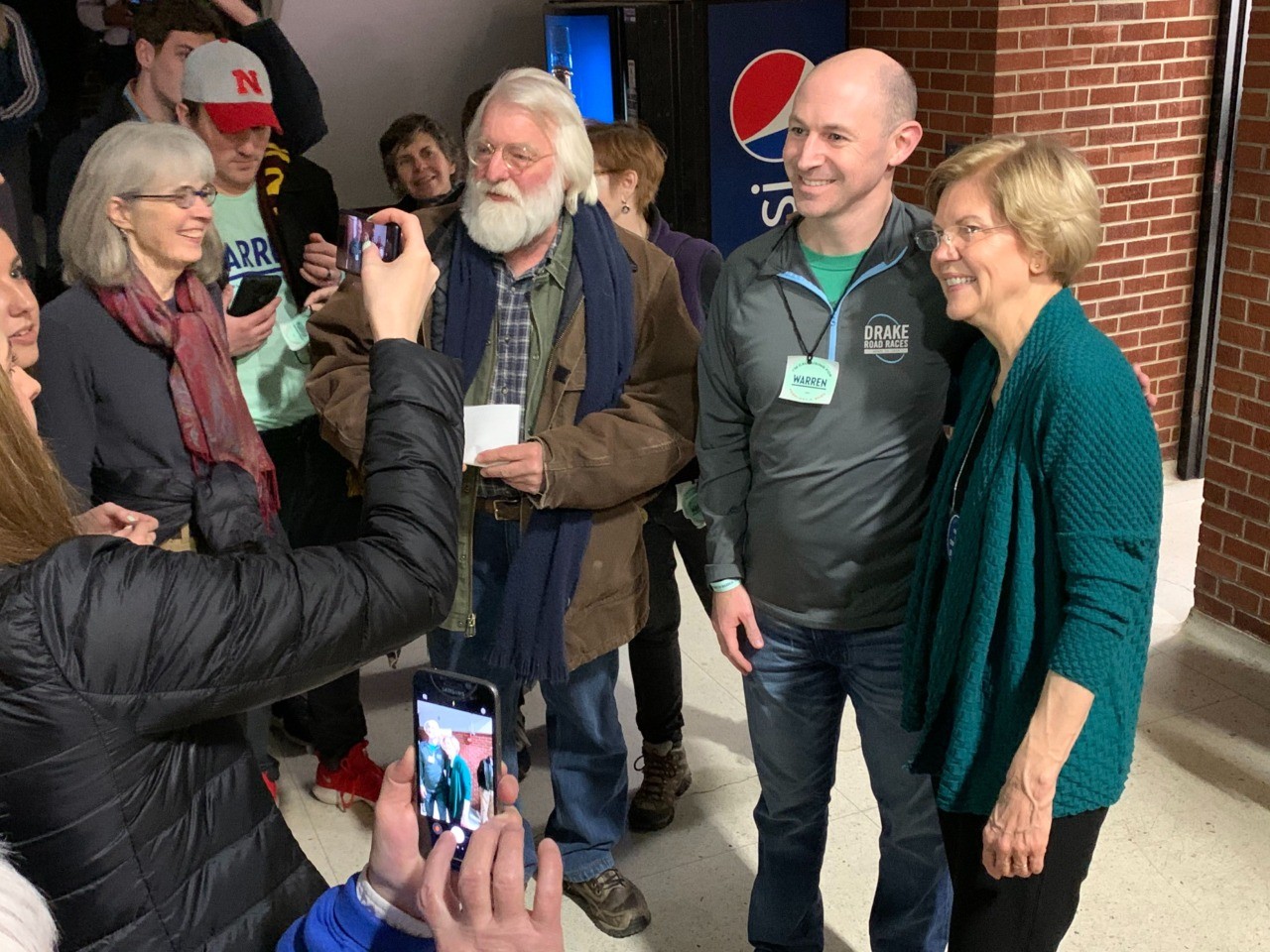 8:00 PM: Doors closed and caucuses begin throughout the state. 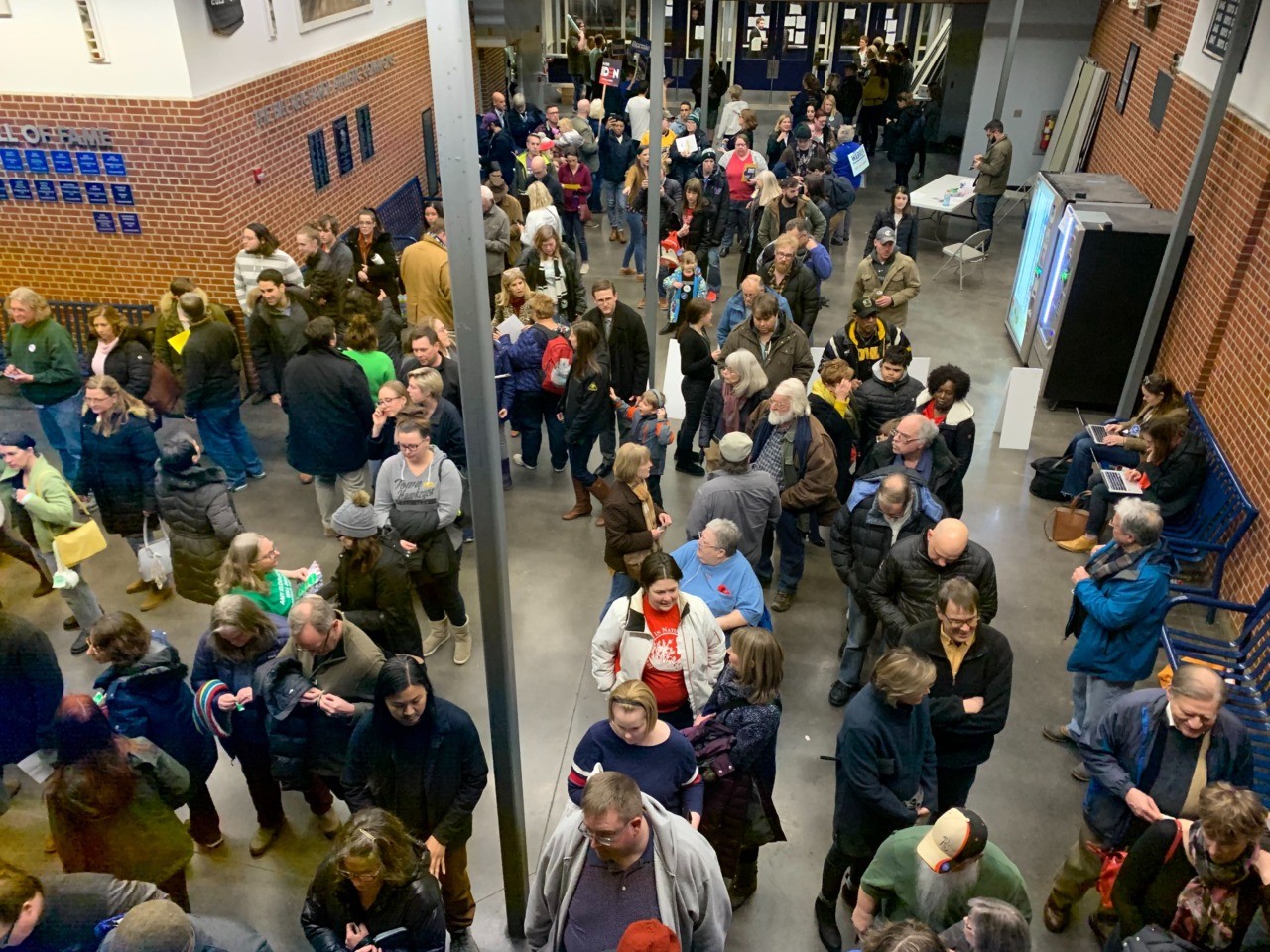 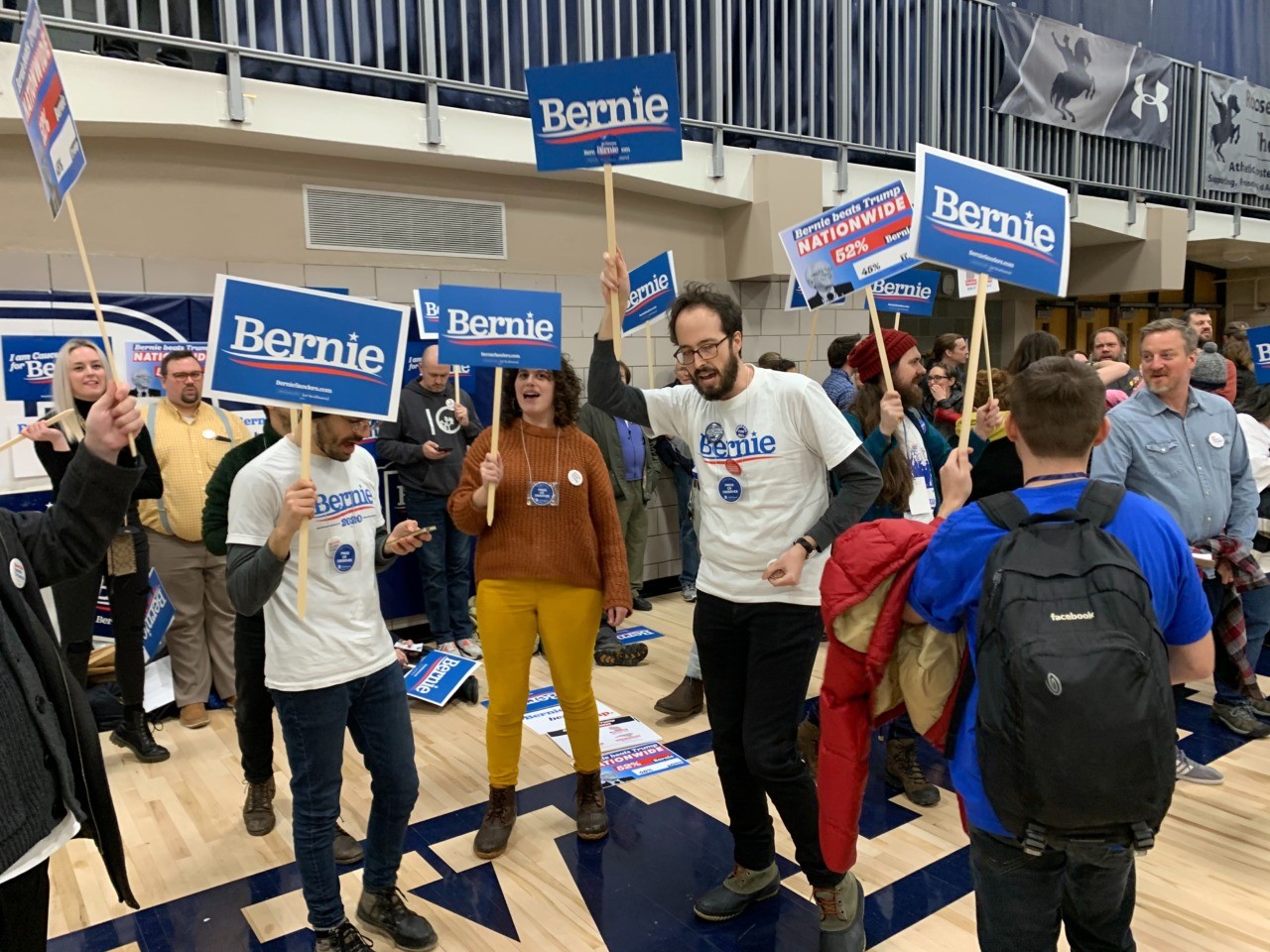 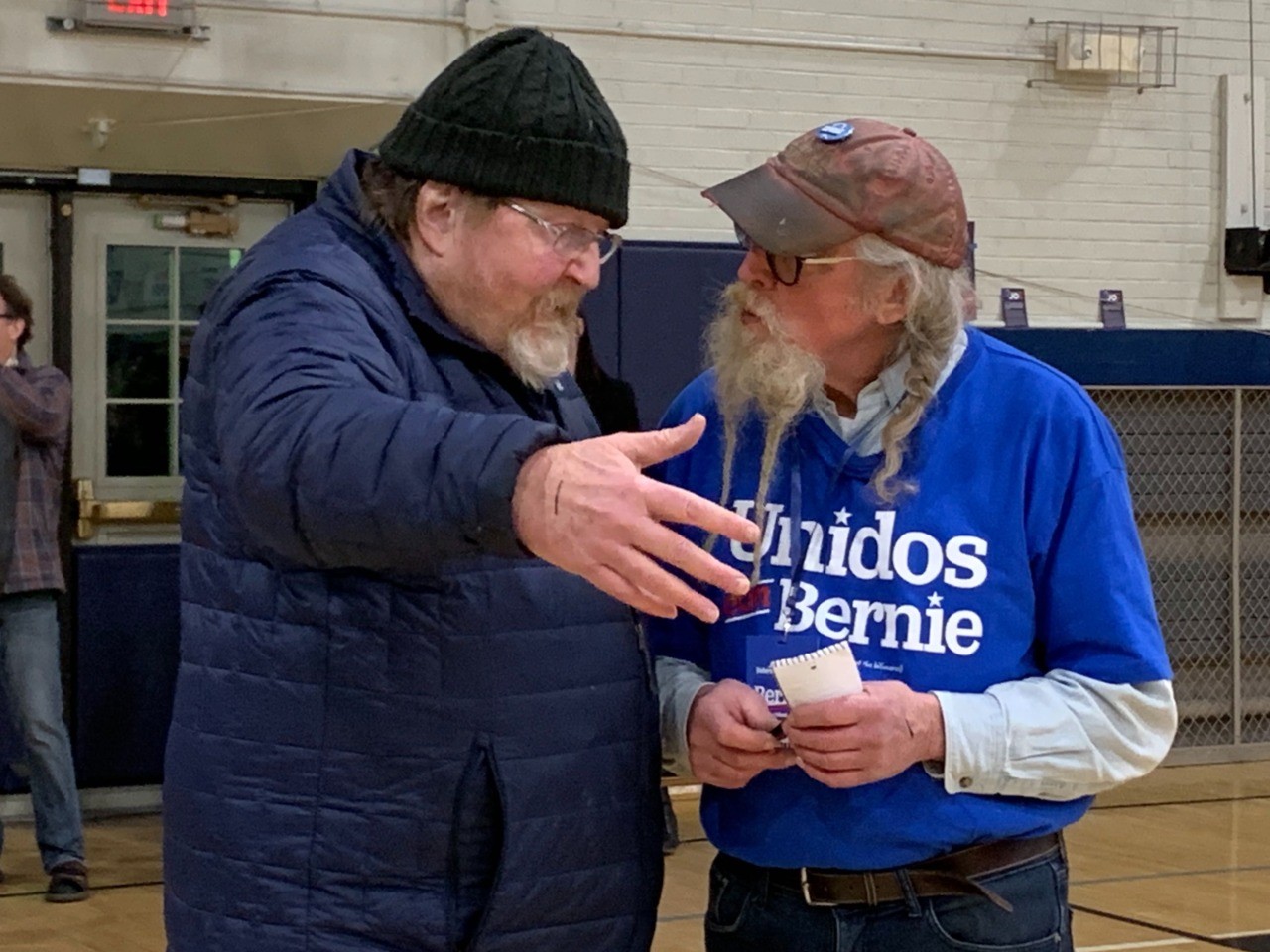 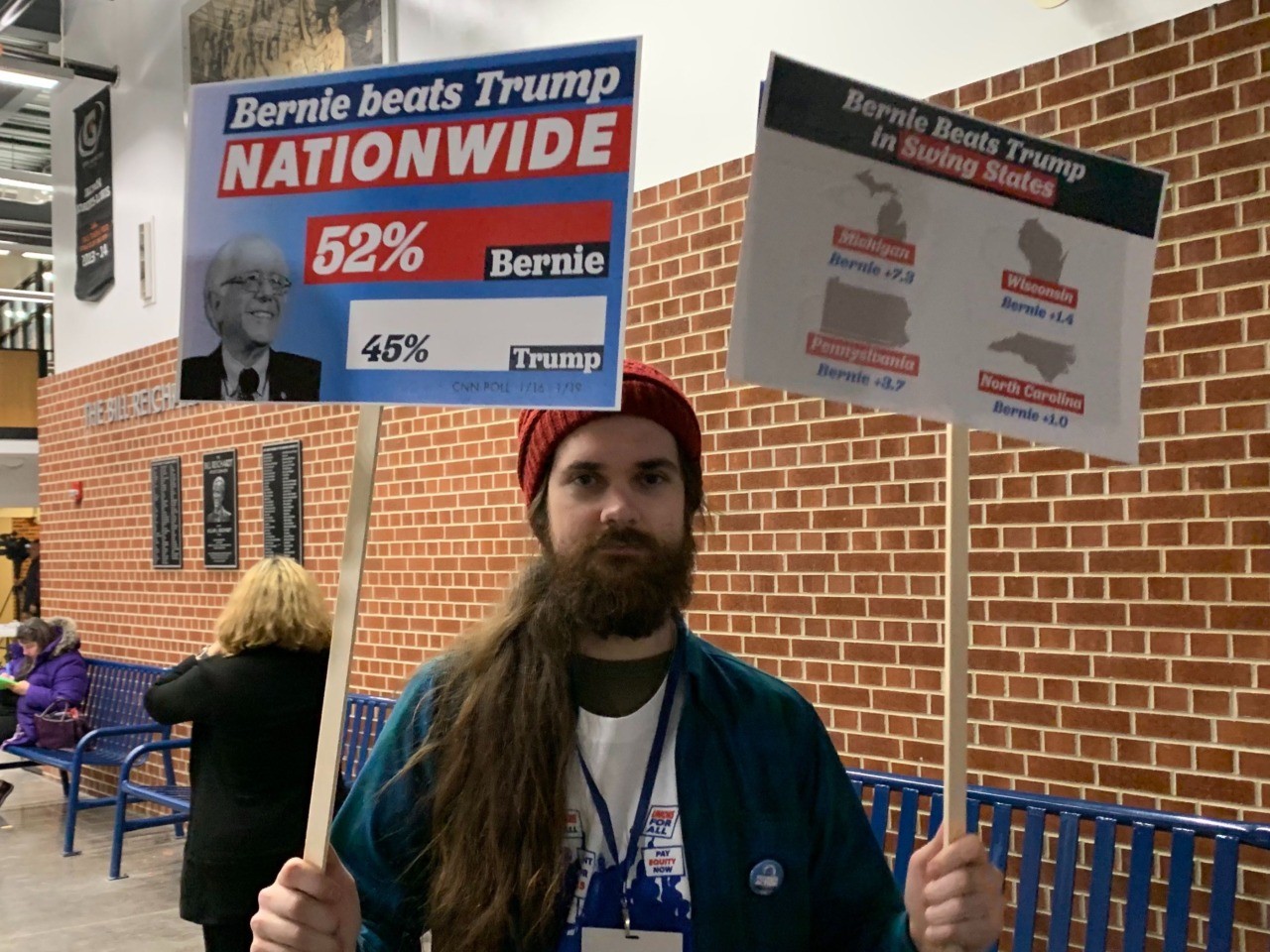 7:30 PM: Joel on the ground in Iowa. Caucuses start at 8 PM ET. Multiple candidates could declare victory at the end of night as Democrats will report the popular vote in addition to the number of delegates each candidate receives.

the unreleased Des Moines Register poll, according to @claremalone:

7:15 PM: Watch out for zombie candidates and technical difficulties:

Today caucus-goers in Iowa woke up to more than a dozen kids in cages all over the city of Des Moines.

We came to remind people that this remains a reality & that the issue cannot be pushed under the rug.

After making a surprise stop at one of his Des Moines field offices today, @JoeBiden told reporters his campaign is “going to survive all the way through the whole thing” even if he doesn’t win the Iowa caucuses tonight. pic.twitter.com/MaJUeqcRi0