The Atlanta Journal-Constitution reported on questions Harris is facing about her record:

The query came from music mogul Jermaine Dupri, who asked what she tells those worried about her background as a prosecutor who “put a lot of Black brothers away in your past.” Making her first visit to Atlanta since joining the Democratic ticket, Harris answered with an extended monologue aimed squarely at President Donald Trump’s attempts to woo black men.

Trump, she said, pushed “the theme that the first black man to be president of the United States was illegitimately there.” And, she continued, he “has referred to black women by words I will not repeat here — and I’m not talking about myself.”

“Yes, I was a prosecutor,” Harris said to Dupri during a roundtable discussion. “I decided to go in a system that I knew was flawed to reform it. Yes, I decided to go up the rough side of the mountain, as we say in church. And I didn’t fix the entire system.”

Harris in her remarks also repeated the false narrative Trump has not denounced white supremacy.

“Donald Trump, who in the last debate, stood on the debate stage and refused to condemn white supremacists,” Harris said.

As Breitbart News has reported, Trump has repeatedly denounced white supremacists and his administration has, in fact, prosecuted extremists during his tenure as president.

Newsweek reported on the record prosecutions of white supremacists under Trump:

Sixty-four white supremacists have been sentenced to a combined total of 820 years’ imprisonment in what is believed to be the largest collective prosecution of white supremacists in the United States, according to the U.S. Attorney’s Office for the Northern District of Texas.

“Not only do white supremacist gangs endorse repugnant ideologies, they also facilitate a violent drug and gun trade, putting our citizens in grave danger,” U.S. Attorney Erin Nealy Cox said in a press release. “We were alarmed – but not necessarily surprised – at the quantities of drugs and firearms recovered during this investigation. The U.S. Attorney’s Office is committed to working with our law enforcement partners to dismantle these organizations, disrupt their criminal activities, and put their members behind bars.”

Harris said Trump doesn’t care about blacks based on his response to the coronavirus pandemic.

“The people of Georgia deserve to have a president who sees them, who cares about them,” Harris said. “Georgia has been so hard hit by the pandemic.” 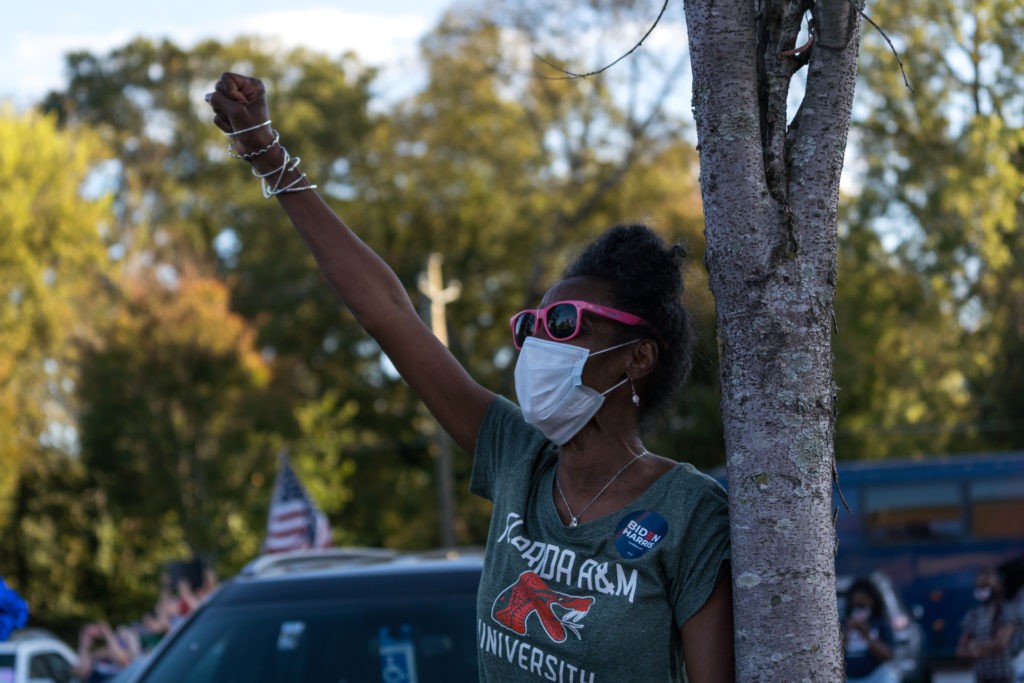 A woman cheers while Democratic vice presidential nominee Sen. Kamala Harris (D-CA) speaks to supports while visiting Morehouse College in Atlanta, Georgia. Harris is in Georgia to make a push for early voting. According to reports more than 2.3 million votes have been cast in the state through early in-person voting or through mail-in voting so far. (Megan Varner/Getty Images)

“Democrats hope Harris, the first woman of color on a major party’s presidential ticket, will energize black voters who form the backbone of the state’s Democratic Party,” AJC reported.

The Los Angeles Times reported on Harris’ time as a prosecutor:

Starting in the late 1960s, one lurid murder after another fed public perceptions that crime in California was spiraling out of control. Gang shootings turned neighborhoods into combat zones. The crack epidemic ravaged communities.

Fear and outrage spawned a raft of harsh sentencing laws. California enacted one of its most punitive, “three strikes and you’re out,” after one parolee killed 18-year-old Kimber Reynolds of Fresno in 1992 and another kidnapped and killed 12-year-old Polly Klaas of Sonoma County a year later.

The laws strengthening criminal penalties drove a surge in the state’s prison population over 30 years, beginning in the 1970s. Under both Republicans and Democrats — including Kamala Harris, who became a prosecutor in 1990 — a tough-on-crime political culture flourished in California, and African Americans were hit hardest: Their incarceration rate remains more than five times their share of California’s population.