President Donald Trump won his first term in office on a promise to revive American manufacturing and end the devastation that decades of globalism had inflicted on America’s factory towns and cities.

It’s a promise he has kept. Here are six major victories for manufacturing Trump won in his first term.

By the end of the Obama administration, the manufacturing recovery from the Great Recession had stalled. Trump promised on the campaign trail to restore manufacturing jobs — a promise derided by the mainstream media and President Barack Obama, who famously asked if Trump planned to create the jobs with a magic wand.

Manufacturers, however, started growing their payrolls almost as soon as Trump won the election. Trump’s policies of rolling back regulation, cutting taxes, and fighting back against the predatory trade policies of China and others gave factory owners the confidence that they needed to invest in their workforce again. U.S. manufacturing employment grew every single month from August 2017 through February 2019, a 19-month winning streak that was the longest expansion in U.S. factory hiring since the post-recession hiring streak during Bill Clinton’s presidency. American manufacturing was not just losing jobs in the final years of the Obama administration, factory output had gone into decline. Indeed, the post-financial crisis recovery peaked in November 2014 and then fell until August 2016, a stunning 21-month low losing streak.

Trump turned that around, with industrial production growing in each of the first 22 months of his administration. In December of 2018, after the Federal Reserve recklessly hiked rates to an unsustainable level, industrial production staggered. But Trump’s tax cuts, trade policies, and deregulation — as well as relentless pressure on the Fed to reverse course — kept it from falling by much. Indeed, until the pandemic hit, industrial production in manufacturing remained above where it had been at any time during all of Obama’s eight-year term. 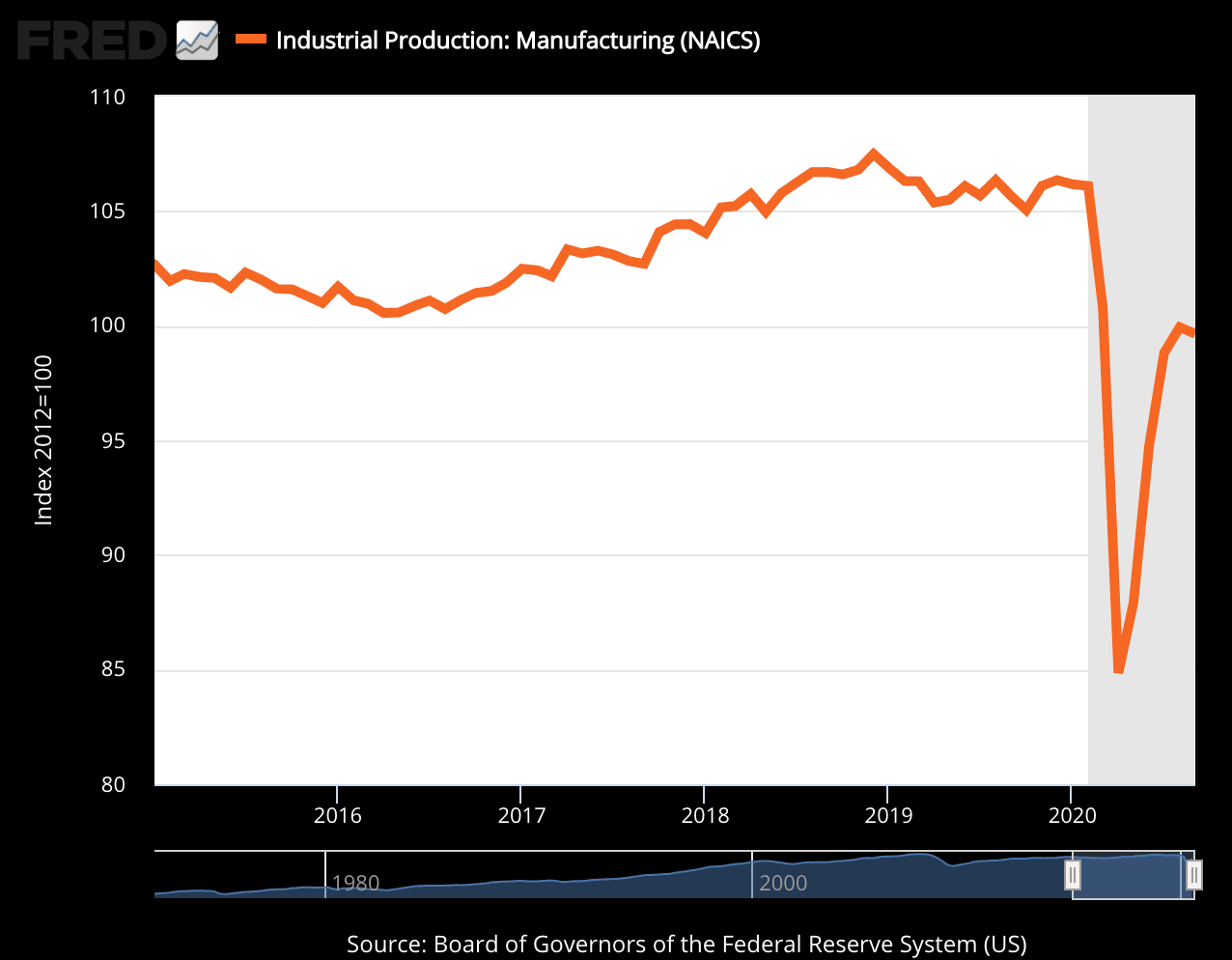 The demand around the world for goods made in the U.S. fell sharply in the final years of the Obama administration. As the U.S. prepared to hinder its own manufacturing ability with stringent, far-left environmental regulations under the Paris Accords and sign onto the Trans-Pacific Partnership (TPP) trade pact that would have signaled a surrender of U.S. manufacturing capacity, households and companies around the world turned elsewhere for manufactured goods and agricultural products.

After Trump’s victory in the GOP primary and Hillary Clinton’s announcement that she would oppose the TPP (an agreement she had helped negotiate), the future of U.S. exports revived. U.S. exports to the rest of the world climbed in 11 of the first 15 months of Trump administration. Around this period, however, the Federal Reserve hiked rates five times. With U.S. interest rates so high, the value of the dollar climbed, making U.S. goods more expensive relative to foreign goods, eventually ending the climb in exports. Importantly, however, after a brief decline, the Trump administration’s policies were able to hold the line and keep exports from collapsing to the Obama era levels.

At least until the China plague struck. 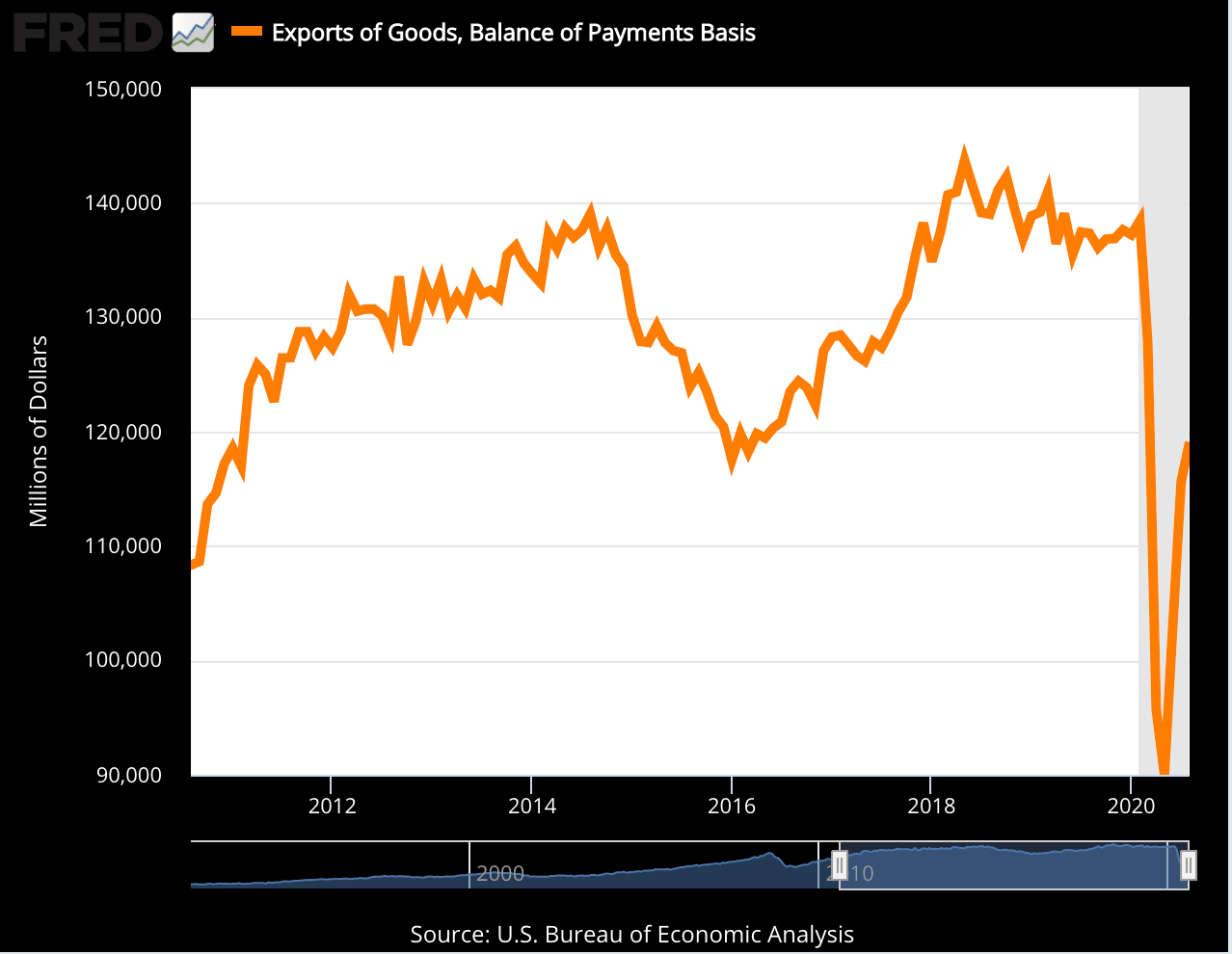 Durable goods are at the heart of U.S. manufacturing. These are items made in the U.S. that are intended to last three years or more. Think washing machines, lawnmowers, cars, trucks, and household appliances. After recovering from the financial crisis and subsequent recession, new orders for U.S. made durable goods stagnated. Toward the end of the Obama administration, new orders had been in decline.

The election of Trump turned that around. Durable goods orders once again began to rise. In September of 2018, they hit their highest level ever (not counting a brief spike in the summer of 2014 due to a surge in orders for aircraft from Boeing), surpassing their pre-Great Recession peak. 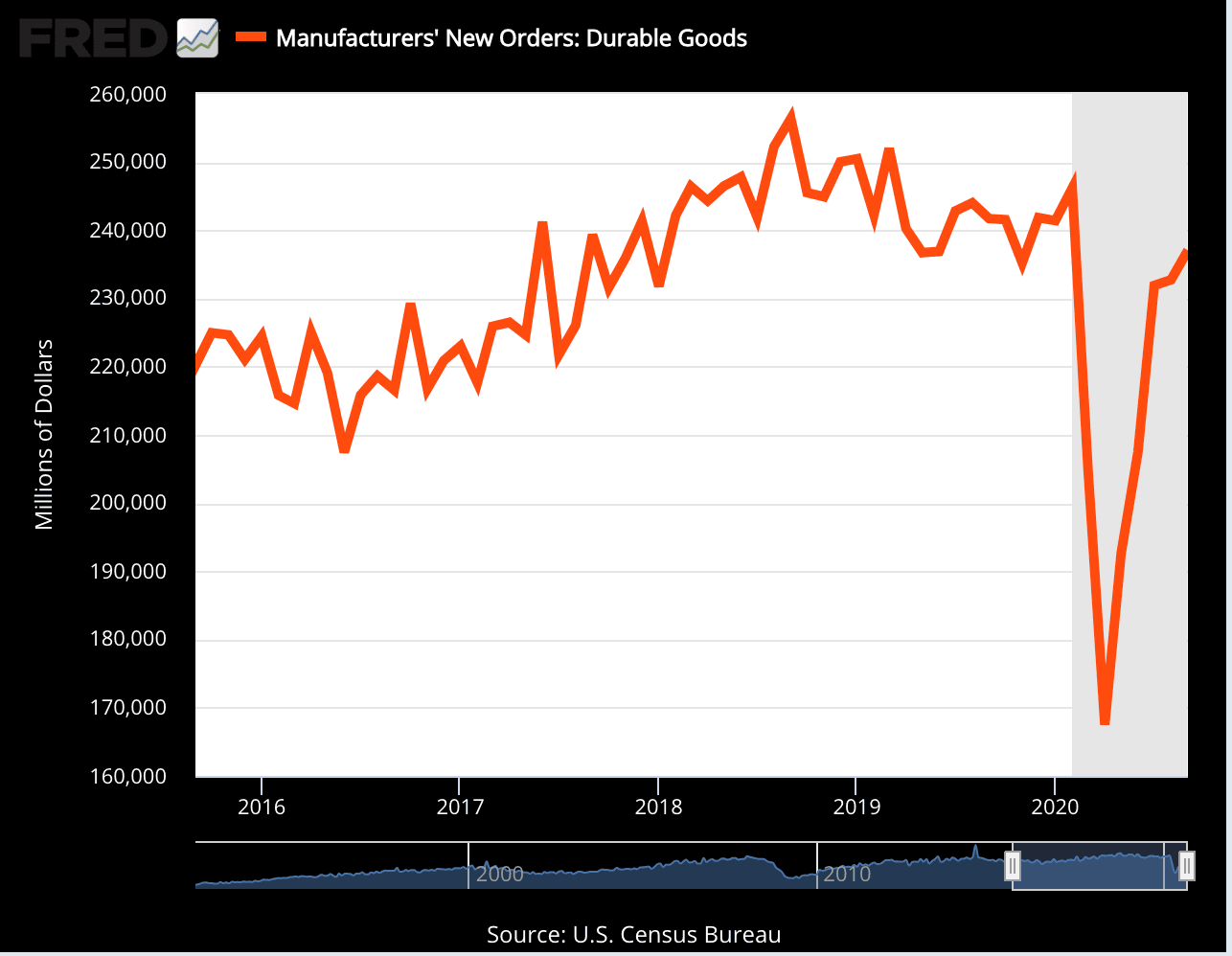 The rise in exports and new orders not only fueled jobs gains, they also powered wage gains. Average hourly earnings for non-supervisory production employees, rose throughout Trump’s first three years in office. So, there were more workers in manufacturing and they were getting paid more money for each hour of work.

The pace of wage gains also increased. At the end of 2016, hourly wages in manufacturing were rising 2.6 percent per year.  By the end of Trump’s first year, wage gains jumped to 3.3 percent annually. Although wage gains slowed in 2018, they generally remained above the Obama administration peak. 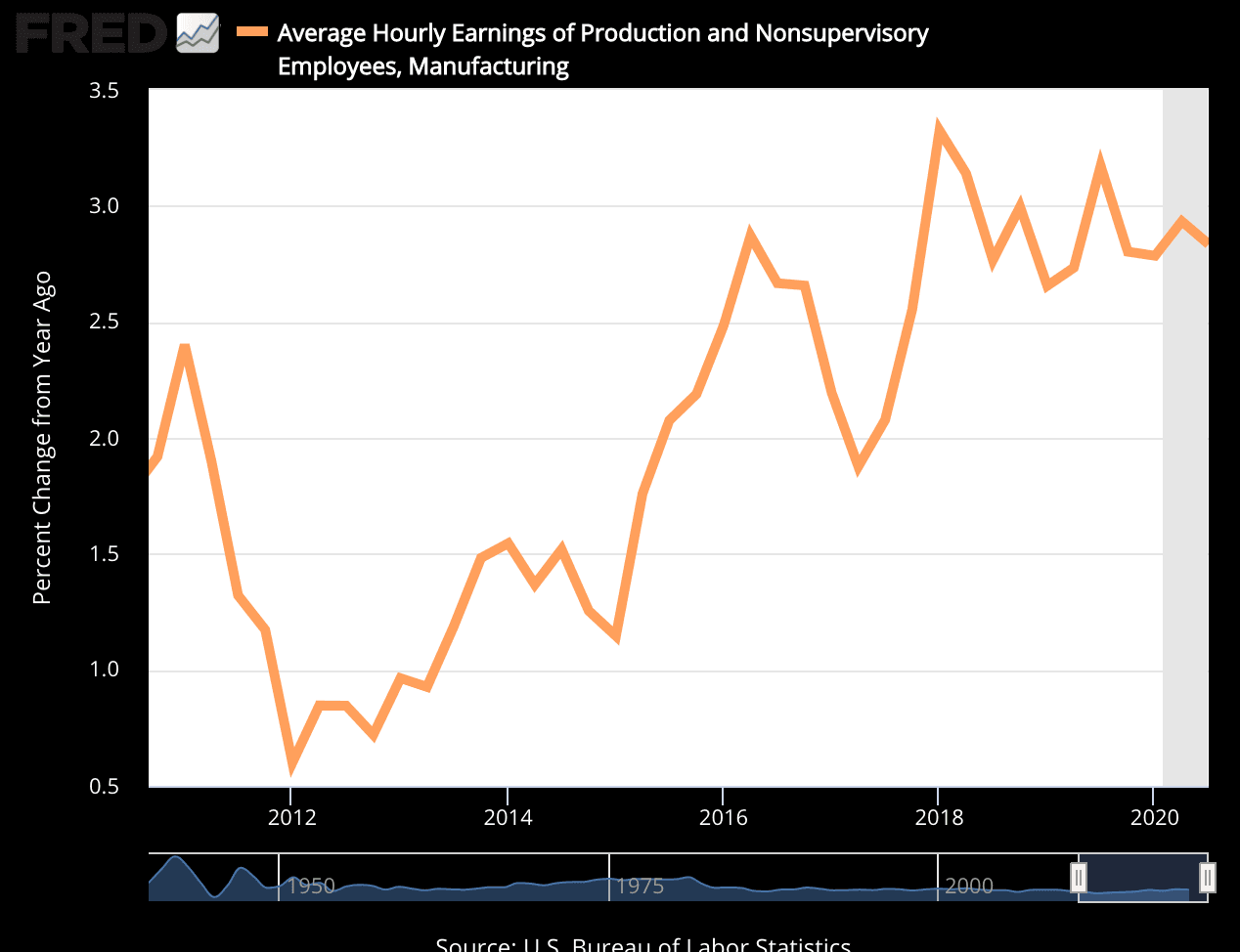 Americans increasingly are willing to put their money where their mouth is when it comes to buying American-made products. TradeVistas’ September poll of 1,003 adults, conducted by Lincoln Park Strategies, shows overwhelming support for “America First” approaches to the economy.

Twenty-five percent of respondents said they would choose an American-made good over a comparable foreign product “regardless of cost,” while 31 percent say they would pay a 10 to 20 percent premium.  So that is a total of 56 percent who are willing to pay more for a Made in America product. Just three years ago, a Reuters/Ipsos poll found that while 70 percent of Americans thought it was “very important” or “somewhat important” to buy U.S. goods, just 26 percent said they would pay only up to 5 percent more for American products.

The triumph of the Trump administration’s pre-China plague revival of U.S. manufacturing demonstrates how badly many economists, politicians, and pundits underestimated the capacity of U.S. factories and workers to expand. With the right leadership, the right policies, and an American people enthusiastic about economic nationalist policies, manufacturing snapped back.

The China plague closed factory floors and cost millions of jobs. But manufacturing is on the mend. Spending on durable goods orders is remarkably already above pre-pandemic levels. Wages in goods producing jobs rose two-tenths of a percent in September. They are still down compared with the start of the year but up 10.9 percent compared with April’s lockdown low. We’re on the verge of making manufacturing great again, again.