Powell, who is not affiliated with Trump’s legal team, told a crowd of supporters, “I think I would encourage all Georgians to make it known that you will not vote at all until your vote is secure, and I mean that regardless of party.”

Powell’s remarks stand in opposition to Trump, who has encouraged Georgians to vote for Loeffler and Perdue on January 5, the day of the runoff election, and has scheduled a rally for Saturday in the Peach State to campaign for the Republican incumbents.

“They are fantastic people who love their Country and love their State. We must work hard and be sure they win,” Trump said Wednesday.

Wood declared during the press conference that Loeffler and Perdue should “earn” their votes. “They’ve got to earn it. They’ve got to demand publicly, repeatedly, consistently, ‘Brian Kemp, call a special session of the Georgia legislature.’”

Powell and Wood have claimed mass voter fraud occurred in the 2020 presidential election, specifically with Dominion Voting Systems election technology, which is used in many voting locations nationwide. Powell filed a lawsuit in Georgia last week alleging that Dominion is corrupt.

When a clip of Wood’s Wednesday comments surfaced on Twitter, CNN anchor Jake Tapper retweeted the message, and “Lin Wood” quickly became a trending topic on the platform, with about 141,000 tweets at press time. 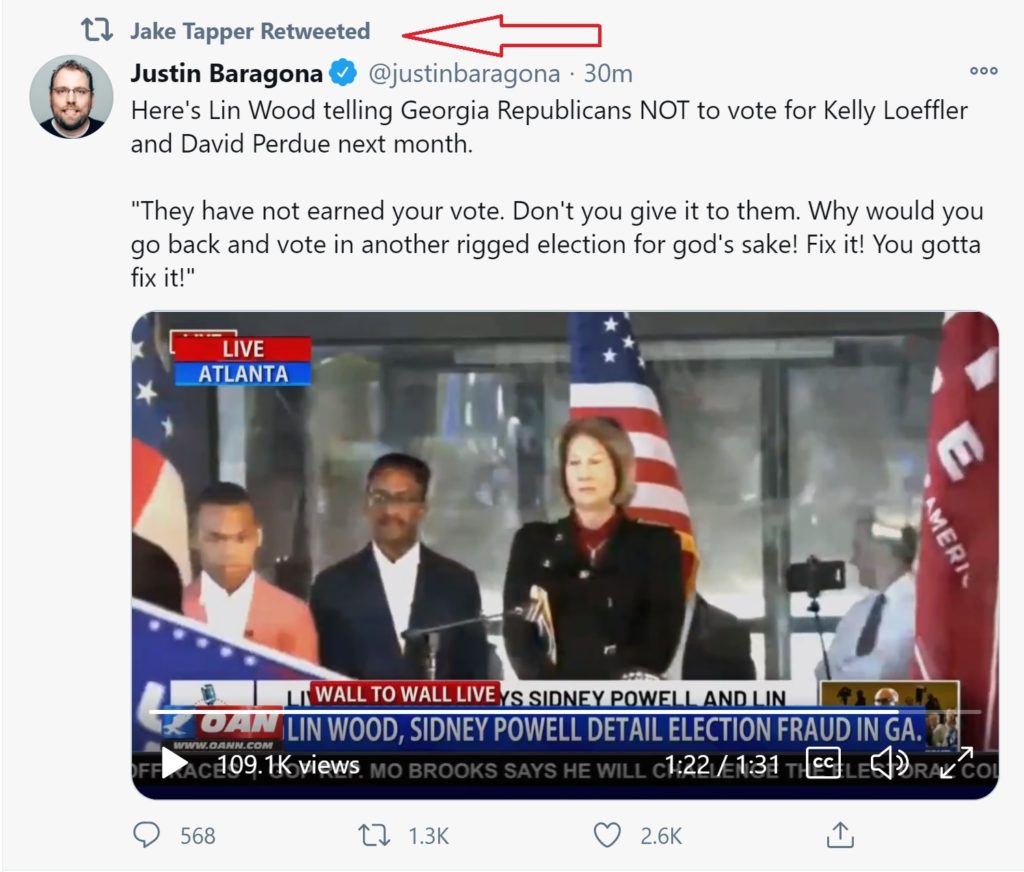 “If they do not [address voter fraud allegations], if Kelly Loeffler and David Perdue do not do it, they have not earned your vote,” Wood declared. “Don’t you give it to them. Why would you go back and vote in another rigged election for God’s sake? Fix it. You gotta fix it before we’ll do it again.”

Washington Post White House reporter Josh Dawsey observed that Powell and Wood “may be in-kind contributions” for Georgia Democrats, who are seeking to control the Senate majority by electing Democrats Rev. Raphael Warnock and Jon Ossoff, challengers to Loeffler and Perdue:

Sidney Powell and Lin Wood may be in-kind contributions for the Democrats in Georgia. https://t.co/rahS4zI76p

Really American, a left-wing super PAC seeking to create divides among supporters of Trump and the Georgia Republican Senate candidates by erecting billboards against the candidates in heavily Republican areas of the state, also chimed in that “Perdue & Loeffler have not earned the vote of MAGA in Georgia. They failed to deliver for Trump”:

While we disagree with what he’s doing, Trump lawyer Lin Wood is absolutely right about one thing: Perdue & Loeffler have not earned the vote of MAGA in Georgia. They failed to deliver for Trump. Don’t deliver for them.pic.twitter.com/YV6gKm0gly

In addition to the president himself, Trump’s closest surrogates are advocating for voters to support Loeffler and Perdue. Vice President Mike Pence, who has already held two rallies in Georgia, has scheduled a rally in Savannah for Friday while Donald Trump Jr. has urged voters to “ignore” those who are telling Republicans not to vote. Trump Jr. also just dropped a six-figure radio ad on the race in support of the Republican senators.