A father visiting his son at Marist College was shot and killed Sunday in the lobby of Marriot hotel in Poughkeepsie, New York.

FOX 5 indicates that police believe 53-year-old Paul Kutz’s death was the result of a random shooting that occurred “during a fight between two homeless men and hotel staff.”

Two suspects with criminal histories–35-year-old Roy Johnson Jr. and 26-year-old Devin Taylor–have been arrested in connection with the shooting. Johnson is charged with murder and Taylor with the possession of a weapon.

Two guns were recovered at the scene — the men apparently were staying at the hotel — as were “bomb-making materials and manuals.”

ABC 7 pointed out that four men, ages 24 to 28, were wounded in Harlem during one shooting incident during those 16 hours. That shooting occurred at 11:45 p.m. Tuesday, September 27, and occurred “just hours after four were shot in Queens.”

The shooting death of the father in Poughkeepsie and the 16 hours of violence in NYC were preceded by Gov. Kathy Hochul’s (D) announcement of the establishment of new gun-free zones around the city, noting all the places in which law-abiding citizens would not be allowed to carry a firearm for self-defense. 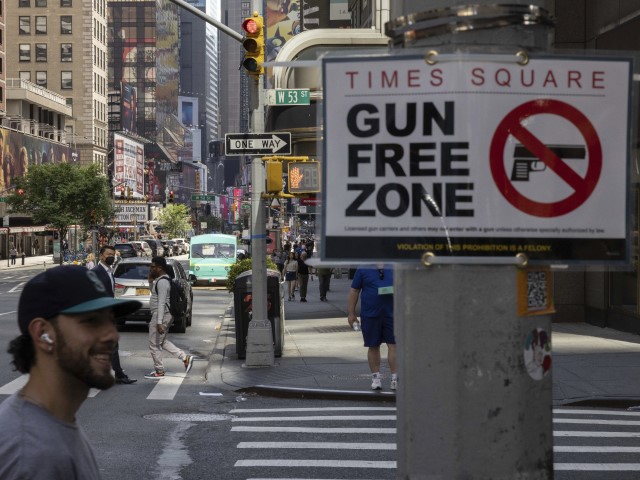 Breitbart News covered a press conference 0n August 24 in which Hochul presented a list of many of the new gun controls Democrats were implementing in New York. She noted, “The threat of making mass harm is now a crime,” and pointed out that state law also now “bans the sale of AR-15s to those under 21,” adding, “I don’t think you should be able to purchase them at all, but we have court cases that say otherwise.”

AWR Hawkins is an award-winning Second Amendment columnist for Breitbart News and the writer/curator of Down Range with AWR Hawkins, a weekly newsletter focused on all things Second Amendment, also for Breitbart News. He is the political analyst for Armed American Radio and a Turning Point USA Ambassador. AWR Hawkins holds a PhD in Military History, with a focus on the Vietnam War (brown water navy), U.S. Navy since Inception, the Civil War, and Early Modern Europe. Follow him on Instagram: @awr_hawkins. You can sign up to get Down Range at breitbart.com/downrange. Reach him directly at awrhawkins@breitbart.com.