Italy’s ambassador to the Democratic Republic of the Congo (DRC) was shot and killed on Monday after armed assailants ambushed his U.N. convoy as he traveled in eastern DRC, the Italian foreign ministry confirmed in a statement.

Luca Attanasio, 43, suffered “gunshot wounds to the abdomen” and was taken to a hospital in Goma in critical condition, where he later succumbed to his injuries, a diplomat in Kinshasa told Radio France Internationale (RFI). An Italian police officer who accompanied Attanasio in the convoy, Vittorio Iacovacci, and an unidentified Congolese driver also died from wounds sustained in the attack.

The assailants kidnapped four other members of the convoy, one of whom was later found, DRC’s interior ministry said on Tuesday.

The ambush occurred as the convoy traveled from DRC’s eastern regional capital, Goma, to the town of Rutshuru to visit a World Food Program (WFP) school project there. Rutshuru is located in Nyiaragongo Territory, considered one of the most dangerous regions of DRC.

“The attack … occurred on a road that had previously been cleared for travel without security escorts,” the WFP, a U.N. agency, said in a statement on Monday. The DRC interior ministry said that state security services and provincial authorities had not received advance warning of the convoy’s trip and thus were unable to provide security for the U.N. official. 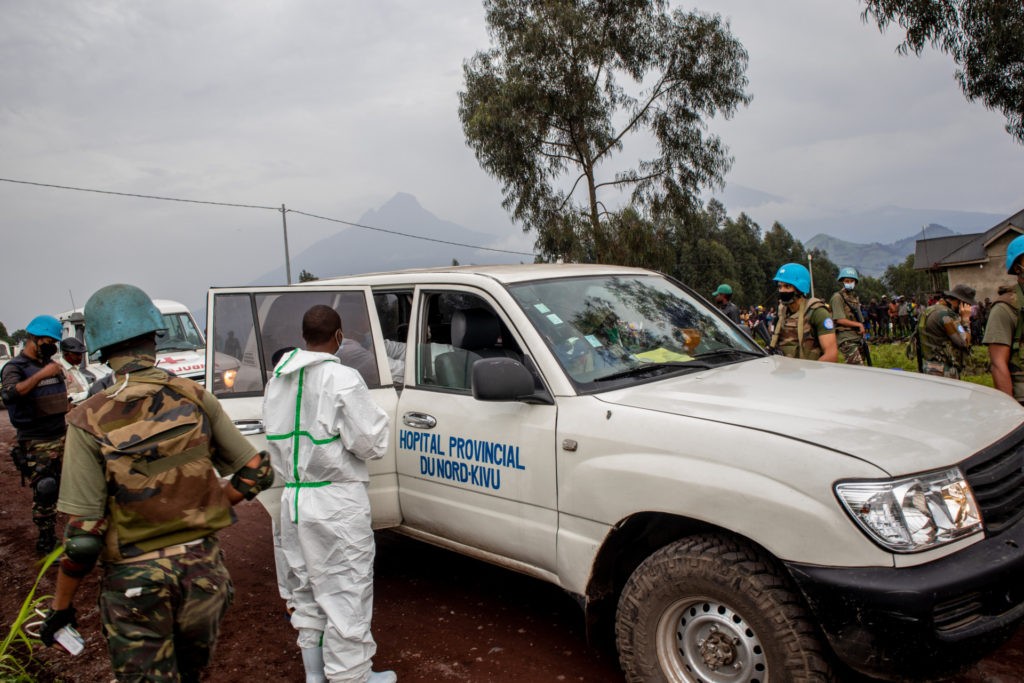 UN peacekeepers and Congolese armed forces stand near an ambulance transporting a victim from the site where Italian Ambassador Luca Attanasio was fatally attacked when the convoy he was traveling in came under attack on February 22, 2021 near the village of Kibumba, Democratic Republic of Congo. An Italian military police officer and a Congolese driver with the convoy, which was traveling near Goma as part of a UN World Food Programme initiative, were also killed. (Guerchom Ndebo/Getty Images)

DRC’s interior ministry blamed the incident on “members of the Democratic Forces for the Liberation of Rwanda (FDLR),” a Hutu rebel group from neighboring Rwanda that has carried out attacks in the DRC’s Nyiaragongo Territory for over 25 years. DRC President Félix Tshisekedi described the ambush as a “terrorist attack” and also claimed the Rwandan Hutu rebel group was behind the killings and kidnappings.

Hutu rebels denied the DRC government’s allegations on Tuesday, accusing the armies of the DRC and neighboring Rwanda of responsibility for the attack. The rebel group claimed in a statement that the Italian ambassador’s convoy was ambushed near DRC’s border with Rwanda, “not far from a position of the FARDC (DR Congo armed forces) and Rwandan soldiers.”

“The responsibility for this despicable killing is to be found in the ranks of these two armies and their sponsors who have forged an unnatural alliance to perpetuate the pillaging of eastern DRC,” the statement further read.