South Africa’s historic Old Assembly building was severely damaged by a deliberately set fire on Sunday. The arsonist was evidently able to enter the building and carry out his attack because weekend and holiday shifts for security personnel were canceled to save money.

Police said the arsonist entered through a back window and set a fire on the third floor of the Old Assembly building that spread to the chambers used by the lower house of parliament and severely damaged the roof. A huge pillar of smoke and roaring flames could be seen from the street as dozens of firefighters battled to contain the blaze.

The roof ultimately collapsed and the top floor of the Old Assembly building was gutted, destroying office space, the parliamentary gymnasium, and the main chamber of the National Assembly, the lower house of the South African legislature. 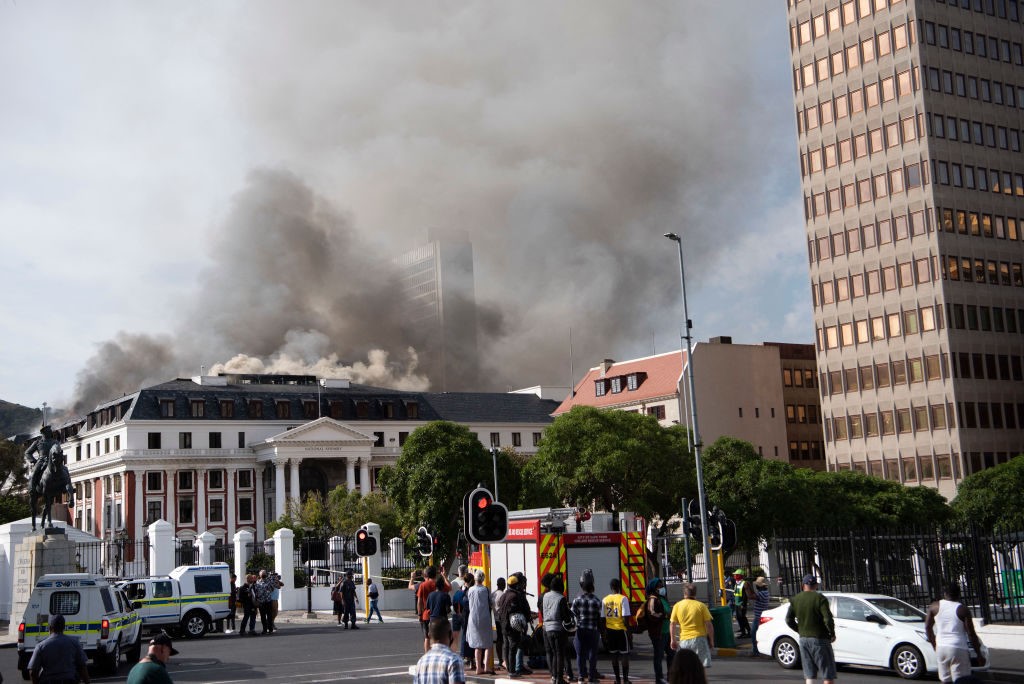 Smoke arises from the National Assembly, the main chamber of the South African Parliament buildings, after a fire that broke out the day before restarted, on January 3, 2022, in Cape Town. (RODGER BOSCH/AFP via Getty Images)

Public Works and Infrastructure Minister Patricia De Lille said “somebody has closed one of the valves,” so there was no water for the building’s automatic sprinkler system. The fire alarm system reportedly malfunctioned and did not begin ringing until firefighters were already on the scene.

The BBC noted that parliament was not in session and there were no reported injuries, but the building houses “thousands of treasures including historic books, photographs and important works of art,” including a famous tapestry that chronicles the history of South Africa.

The status of these artworks and documents was unknown as of Monday morning. Smith said it was not possible to access the areas where historical artifacts are stored without further damaging the building.

The parliamentary complex itself is a historic site, with some buildings dating back to the 1880s.

The Parliament of South Africa caught fire early Sunday morning in Cape Town and burned for several hours, damaging both houses of the national legislature, with no cause yet determined, according to local news reports. https://t.co/4ZhYtv9MiL

Few details were released about the suspect in custody for setting the fire, except that he is a man in his 50s and is not an employee of parliament. The fire was set around 6:00 a.m. local time on Sunday, the day after the state funeral for Archbishop Desmond Tutu.

The suspect was apparently trapped in the building by the fire he set and was taken into custody after he was rescued. He is scheduled to appear in court on Tuesday, to face charges including damage to a structure protected by South Africa’s National Key Points Act.

De Lille said the case has been turned over to the Directorate for Priority Crime Investigation (DPCI), an elite investigative unit commonly known as the “Hawks” that handles corruption and crimes against the government.

South African President Cyril Ramaphosa called the fire “a terrible setback to what we were basking in yesterday,” referring to Tutu’s funeral. He mourned the “destruction of the home of our democracy” and praised firefighters for responding quickly enough to save most of the building. 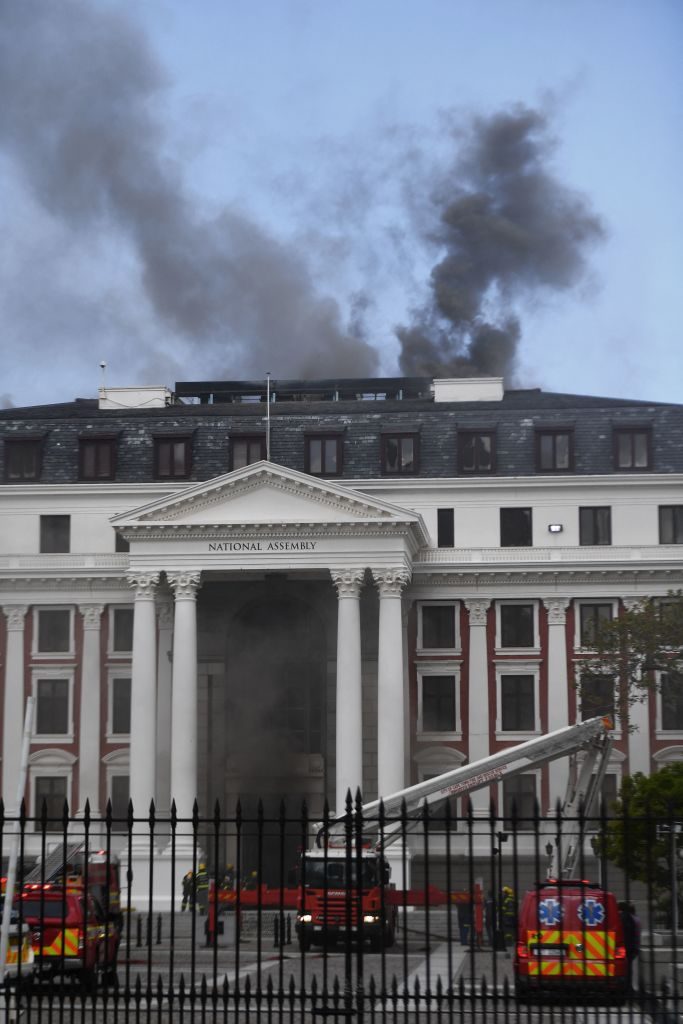 Smoke billows from the roof of a building at the South African Parliament precinct in Cape Town on January 2, 2022, during a fire incident. (RODGER BOSCH/AFP via Getty Images)

National Assembly Speaker Nosiviwe Mapisa-Nqakula told reporters Ramaphosa’s state of the nation address to parliament would proceed as scheduled on February 10, but would be moved to an alternate venue.

“It is egregious that such a thing happened in the first place, there must be no question about it. Whether it was a result of security breaches, which may be apparent to some people, we don’t know,” said Deputy Speaker Lechesa Tsenoli.

“The presiding officers of Parliament are distressed by this incident and the extent of the damage caused thus far to the precincts of the seat of the national legislature. They have urged all relevant authorities to leave no stone unturned in establishing the cause of the fire. The public will be kept updated,” Parliament said in a joint statement.

South Africa’s National Education, Health, and Allied Workers’ Union released a statement on Sunday saying there were no security officers in the building at the time of the attack because holiday and weekend overtime hours were cut as a cost-saving measure. Smith, the Cape Town security official, confirmed the absence of private security staffers to the BBC.