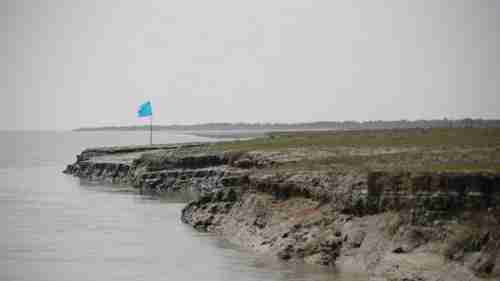 Bangladesh last week again postponed plans to begin relocating 100,000 Rohingyas from refugee camps on the Burma (Myanmar) border to the remote island of Bhasan Char in the Sea of Bengal, about an hour’s boat trip from the mainland. However, planning and implementation are continuing and a new start date announcement is expected soon.

Today, there are over one Rohingyas living in refugee camps near Cox’s Bazar in Bangladesh – the world’s largest population of stateless people, not citizens of Burma, not citizens of Bangladesh. The Buddhists in Myanmar have been incredibly successful in committing almost complete genocide and ethnic cleansing, though they are still in second place this century, behind the genocide and ethnic cleansing being committed by Bashar al-Assad in Syria.

Since 2011, Burma’s mostly Buddhist security forces have been committing mass atrocities on mostly Muslim ethnic Rohingyas living in Rakhine State, in what the United Nations says is “a textbook example of ethnic cleansing,” and which some Western governments are calling genocide. The atrocities by Buddhist security forces include gang rape, violent torture, execution-style killings, and the razing of entire villages in a scorched earth campaign. Myanmar’s genocide is reminiscent of the Buddhist on Buddhist genocide that occurred in Cambodia in the late 1970s under Pol Pot.

In August 2017, Rohingya terrorists took revenge by killing several Burmese security forces in attacks against 30 Burmese police outputs. Using this attack as an excuse, the Buddhist Burmese army began conducting massive slaughter and atrocities against the Rohingyas, causing hundreds of thousands to flee across the border into Bangladesh.

The refugee camps around Cox’s Bazar have been extremely crowded, and are subject to large mudslides during monsoon season. When refugees started arriving several years ago, the Bangladeshis initially welcomed them with sympathy, but have been getting increasingly resentful.

The plan to relocate 100,000 refugees to the island of Bhasan Char was originally proposed in 2015, but it has been postponed several times. In the most recent attempt, prime minister Sheikh Hasina was scheduled on October 3 to officially open newly-constructed shelters for the refugees on Bhashan Char, but the announcement was postponed again. Finance Today (Bangladesh) and Daily Star (Bangladesh) and Quartz (27-Feb) 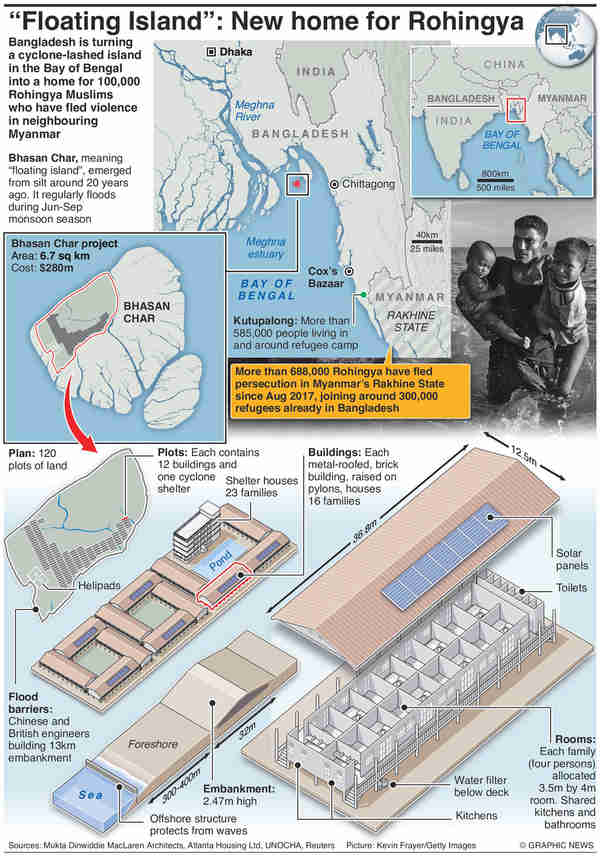 Bhashan Char, which means “floating island” in the Bengali language, emerged from the sea about 10-20 years ago. It was formed in the last 20 years by silt from Bangladesh’s Meghna River.

So Bangladesh’s navy has fast-tracked construction of shelters and water barriers. Each shelter will be a metal-rooted brick building, raised on pylons, to house 16 families. Each family (4 people) will be allotted a 3.5×4 meter room for sleeping, with bathrooms and kitchens down the hall. There will be solar panels on the roof, and water filters below deck.

Chinese and British engineers are building a 13 km embankment, with the entire habitable area surrounded by a wall 2.47 meters high. An offshore structure will protect the structures from the waves.

The construction is only partially complete, which is probably the reason for the latest postponement.

Many NGOs are objecting to the plan to transfer 100,000 refugees to Bhasan Char. Human Rights Watch gives the following reasons: 1) it is not sustainable for human habitation; 2) it could be seriously affected by rising sea levels and storm surges; 3) it likely would have very limited education and health services; 4) it would provide extremely limited opportunities for livelihoods or self-sufficiency; 5) it would unnecessarily isolate refugees; 6) the Bangladeshi government has made no commitment to allow refugees’ freedom of movement in and out of Bhasan Char; 7) it is far from the Myanmar border, and 8) the refugees have not consented to move there.

Nonetheless, construction on the island is continuing, and Bangladesh will probably announce a new relocation date soon. Dhaka Tribune/AFP (18-Sep) and Reuters (22-Feb) and NewsClick (24-Feb) and Human Rights Watch