Sri Lanka’s Christians began mass burials this week for the victims of jihadist suicide bombings on Sunday as the government announced a spike in the death toll from 290 to 359.

Witnesses to the attacks – which successfully targeted three churches and three hotels in the Colombo area and may have failed in attacking several other Christian targets – told local media they have yet to fully comprehend the horror they experienced, particularly in the churches where the terrorists appeared to target children.

One eyewitness said a suicide bomber touched his grandchild’s head while passing by before detonating his explosives.

The Daily Mirror, a Sri Lankan newspaper, spoke to some of the survivors of the bombing of the churches, who said the jihadists left a trail of mangled limbs: 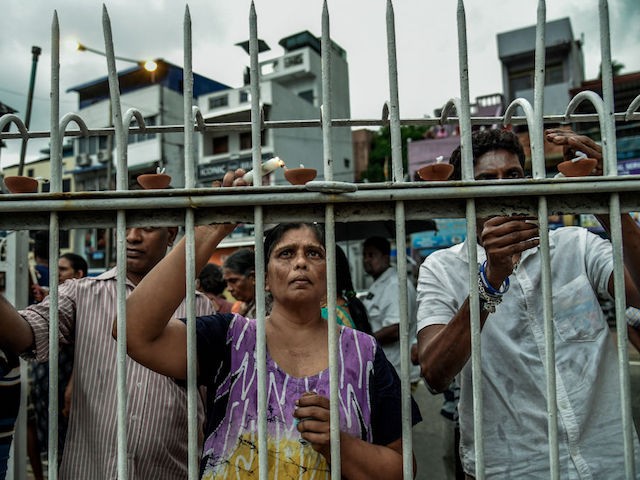 “I couldn’t bare to watch burning babies and children. But everyone rushed in to help. This is a brutal strike,” a man identified as Hamza, a local near St. Anthony’s Church, told the Mirror. “Whoever is responsible should be punished. I say that there is political force behind all this. They are seeking more and more power.”

Selvam Fernando, another eyewitness, told the newspaper that no one entered the church after the blast, but victims “with severe burns” began running out of the church and many died in the street, as medical care arrived late and the victims relied on only the generosity of panicked neighbors for treatment.

“None of us went inside the church. About 15 minutes later, two police officers at a nearby security checkpoint rushed to the scene. It took 30 minutes or so for the emergency services to reach the venue. Until then it was the residents of the area who led the rescue efforts,” he said. 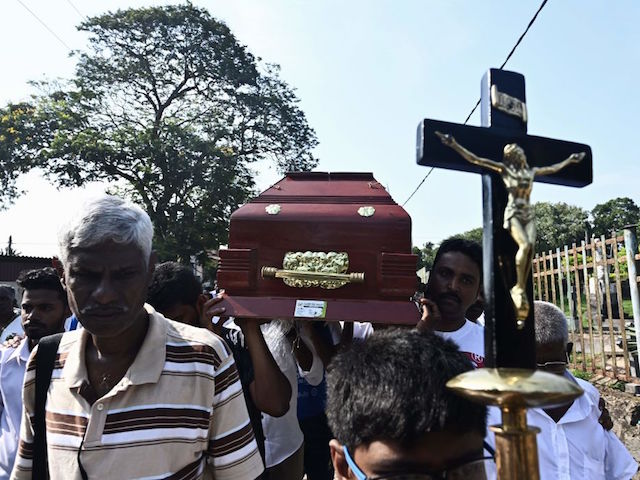 Relatives carry the coffin of a bomb blast victim for a burial ceremony at a cemetery in Colombo on April 24, 2019, three days after a series of suicide attacks targeting churches and luxury hotels in Sri Lanka. (Jewel SAMAD/AFP/Getty Images) 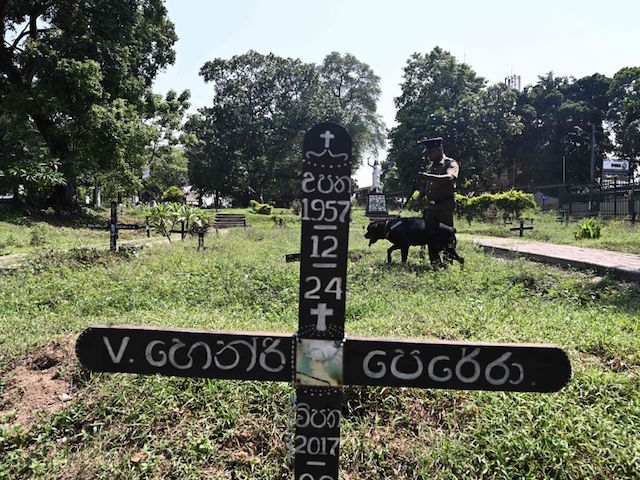 A policeman with a K9 searches a cemetery before a burial ceremony for a bomb blast victim in Colombo on April 24, 2019, three days after a series of bomb attacks targeting churches and luxury hotels in Sri Lanka. (Jewel Samad/AFP/Getty Images) 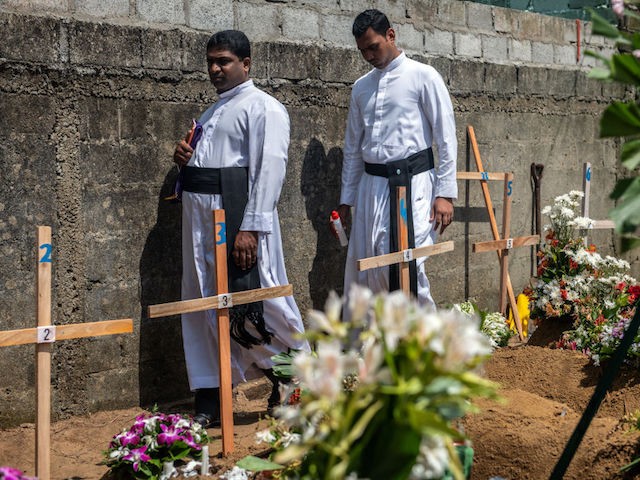 Members of the clergy walk past new graves as they wait for the funerals of people killed in the Easter Sunday attack on St Sebastian’s Church, on April 24, 2019 in Negombo, Sri Lanka. (Carl Court/Getty Images)

The Mirror attributed to unnamed “residents” the theory that jihadists, aware that those with young children often stand in the back of churches so that they can make an easy escape if the child gets loud or upset, set off their bombs closer to the door:

People who were at the front of the altar were not affected as much as the others. Devotees accompanying small children prefer to stay at the back. The parents and children, who took their places at the rear, were caught in the explosion. I feel these problems were worsened because there was no security presence. Almost a decade ago, police security was provided for every festival and mass held at the church. Even before the terrorist threats during the war, adequate security was provided, as a large number of devotees gather here from across the island. There is clearly a lack of security here. This area received a lot of support from the Navy, before their camp was relocated. Now we don’t have their support either” residents said.

A man speaking to another Sri Lankan outlet, the Daily News, said he believes the bomber responsible for destroying another target, St. Sebastian’s Church, gently touched his grandchild’s head before entering the church. Dilip Fernando intended to attend services there but left before the blast because it was too full.

“At the end of the mass they saw one young man go into the church in [sic] with a heavy bag,” Fernando said. “He touched my granddaughter’s head on the way past. It was the bomber.”

UNICEF issued a statement Wednesday confirming the murders of at least 45 children in the attack:

News of how these attacks have affected children and adolescents is still coming in, but we now know that 45 children* – both Sri Lankan and other nationalities – have been killed, and scores more are injured, and are now fighting for their lives in intensive care units across the country. Many children have lost one or both parents, and countless children have been witness to shocking and senseless violence.

Fr. Jude Fernando who runs St. Anthony’s Church spoke to the Mirror shortly after the attack in a state the newspaper described as “clearly traumatized.”

“I still can’t understand what happened here inside the church,” he said. “It was around 8.45 am and we were celebrating the Tamil Easter Mass and I was about to walk into the church. If I had been one step ahead, I would have been injured, but I turned aside and in that moment it collapsed.”

Many relatives of the deceased buried in the first round of services this week mourned their entire families. Jude Fernando, speaking to Al Jazeera, said he lost his mother, as well as his sister and her three children in the attack. His nephew, the youngest, was eight months old.

Several people at the mass funeral Al Jazeera attended condemned Sri Lankan President Maithripala Sirisena for attending and the government generally for doing nothing to prevent the attack, despite reports that officials knew of Islamic State activity in the country as early as 2016.

“The attacks would not have happened like this and people would still be alive if the government had acted,” a woman whose parents died in the attack – and whose grandmother was both gravely injured and missing in a hospital somewhere – told the outlet.

“A whole new cemetery had to be hastily dug to bury more than 100 bodies” at one of the mass burials on Tuesday, CBS News reported: 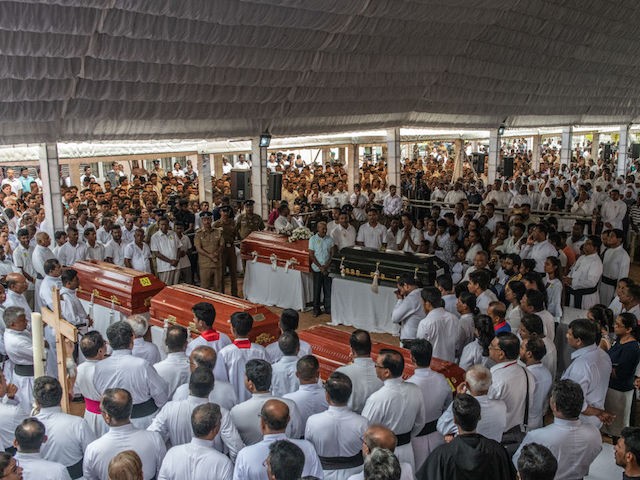 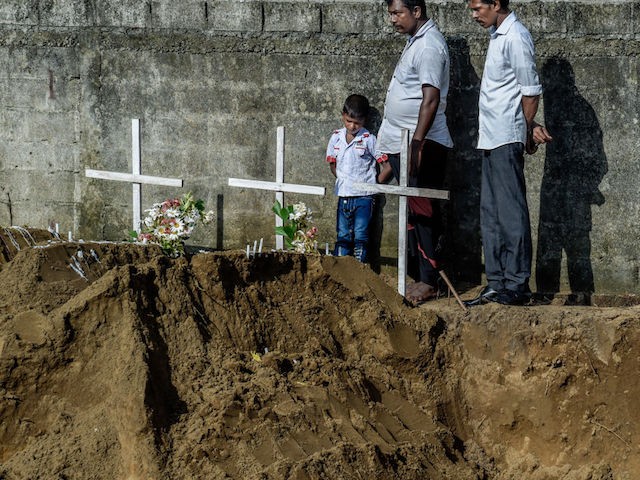 A child looks at a grave after the funeral in Katuwapity village on April 23, 2019 in Negambo, Sri Lanka. (Atul Loke/Getty Images) 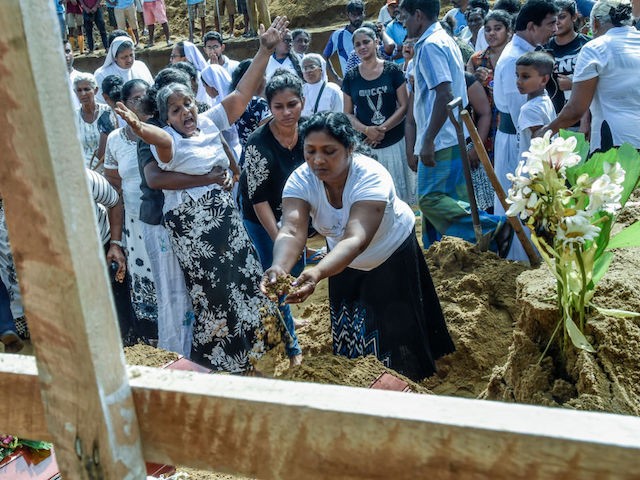 Relatives of dead offer thier prayers during funeral in Katuwapity village on April 23, 2019 in Negambo, Sri Lanka. (Atul Loke/Getty Images) 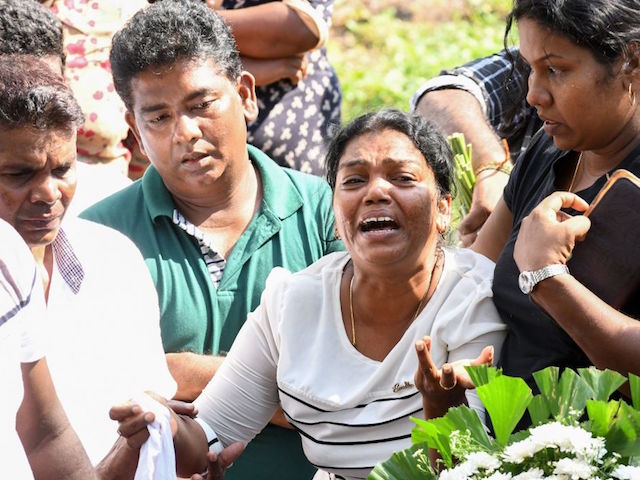 A Sri Lankan woman cries during a burial service for a bomb blast victim in a cemetery in Colombo on April 23, 2019, two days after a series of bomb attacks targeting churches and luxury hotels in Sri Lanka. (Lakruwan Wanniarachchi/AFP/Getty Images)