Hong Kong’s streets were flooded with tens of thousands of protesters Sunday, angry at a proposed extradition law allowing suspects to be sent to China for trial.

Such a move would be in direct contravention of the conditions mandated when the UK handed its former colony back to communist China in 1997, Reuters reports.

The bill’s critics say those extradited would be exposed to China’s deeply flawed justice system, and it would lead to further erosion of the city’s judicial independence, with torture and unfair trials bound to follow.

“It’s a proposal, or a set of proposals, which strike a terrible blow … against the rule of law, against Hong Kong’s stability and security, against Hong Kong’s position as a great international trading hub,” the territory’s last British governor, Chris Patten, said on Thursday.

Police chiefs called for public restraint ahead of the rally, government-funded broadcaster RTHK reported, as they mobilised more than 2,000 officers for action. 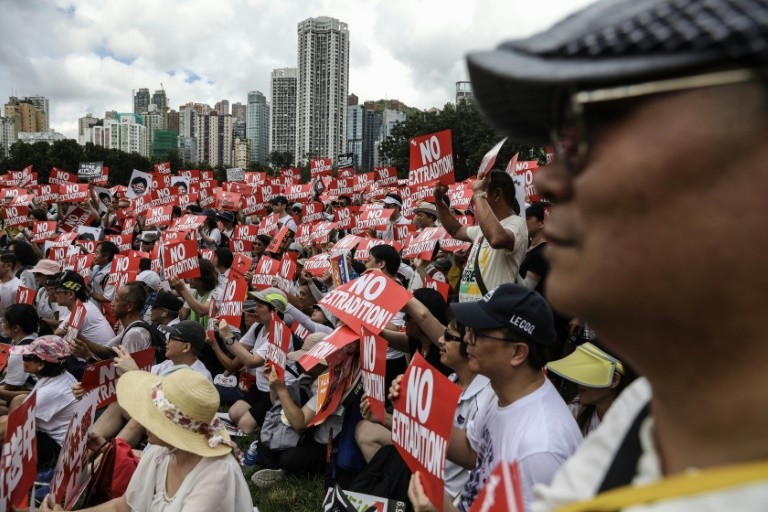 Protesters attend a rally against a controversial extradition law proposal in Hong Kong on June 9, 2019. – The city’s pro-Beijing government is pushing a bill through the legislature that would allow extraditions to any jurisdiction with which it doesn’t already have a treaty — including mainland China for the first time. (Photo by DALE DE LA REY / AFP) (Photo credit should read DALE DE LA REY/AFP/Getty Images)

Protesters, marching in the sweltering heat dressed in white, include a wide range of people – from business people and lawyers to students, pro-democracy figures and religious groups.

“This is the end game for Hong Kong, it is a matter of life or death. That’s why I come,” Rocky Chang, a 59-year-old professor, told Reuters news agency. “This is an evil law.”

“This bill will not just affect Hong Kong’s reputation as an international finance centre, but also our judicial system. That has an impact on my future.”

Hong Kong officials have said local courts will have the final say over whether to grant such extradition requests, and suspects accused of political and religious crimes will not be extradited.

Human rights groups, legal alliances, and numerous governments have expressed their concern about the bill.

The U.S. secretary of state, Mike Pompeo, warned it could damage the rule of law in Hong Kong, and a bipartisan congressional committee urged Lam’s administration to listen to the widespread concerns, saying local and foreign residents in Hong Kong had to be protected “from a criminal justice system in mainland China that is regularly employed as a tool of repression”. 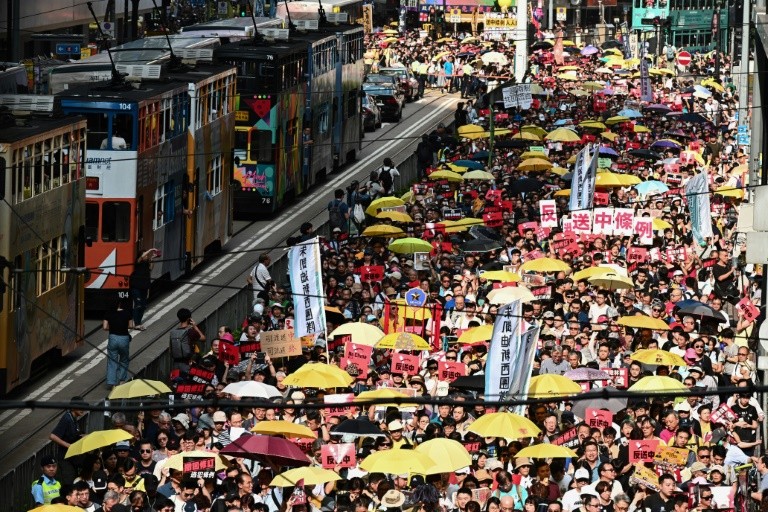 Protesters march during a rally against a controversial extradition law proposal in Hong Kong on June 9, 2019. – Huge protest crowds thronged the city as anger swells over plans to allow extraditions to China, a proposal that has sparked the biggest public backlash against the city’s pro-Beijing leadership in years. (PHILIP FONG/AFP/Getty Images)

The government has sought to reassure the public with some concessions, including promising to only hand over fugitives for offences carrying maximum sentences of at least seven years.

A former British colony, Hong Kong is semi-autonomous under the principle of “one country, two systems” after it returned to Chinese rule in 1997.

The city has its own laws and its residents enjoy civil liberties unavailable to their mainland counterparts.