Hong Kong International Airport canceled all its flights Tuesday – over 200 scheduled departures and arrivals – in response to a flood of hundreds, if not thousands, of protesters blocking passengers from gates and demanding the government listen to their demands for freedom.

The airport was also forced to cancel all flights on Monday; police estimated that 5,000 protesters were present at the airport that day. At press time, there are no official estimates for the number of protesters that blocked flights Tuesday, though images from the scene appear to show a similarly large crowd. The South China Morning Post estimated that at least 1,000 people attended the protest on Tuesday.

Hong Kong’s Apple Daily reported that, as of Tuesday evening, the protests have canceled over 400 flights so far.

Protesters have taken to the airport after police and angry pro-China mobs began meeting protests on the streets of the city with violence, beating demonstrators and using tear gas to subdue them. Video from various Hong Kong neighborhoods this weekend showed police shooting bean bags at protesters at close range, violating protocol, and cornering them into enclosed mass transit spaces before flooding the air with tear gas, choking many.

The pro-China mobs typically appear carrying metal rods or bamboo sticks and beat anyone dressed in black, the color of the protests. Police have done little to subdue the mobs, focusing instead on repressing the peaceful protesters.

Hong Kong entered its tenth week of protests this weekend following a push by lawmakers to enact a law allowing China’s Communist Party to extradite anyone present in Hong Kong for perceived violations of communist law. The protesters contend that this would make Beijing’s laws applicable in Hong Kong, a violation of the “One Country, Two Systems” policy that governs the city.

“Terminal operations at Hong Kong International Airport have been seriously disrupted, and all check-in processes have now been suspended,” the Airport Authority announced on its website Tuesday, according to the Hong Kong Free Press (HKFP), which has been providing eyewitness reports on the ground in the city since the protests started. The authority confirmed that only flights where passengers had checked in before 4:30 p.m. local time would depart the airport.

Protesters primarily targeted the departure halls, where they blocked passengers from crossing into the gate areas. They held up signs listing their demands and with images of brutalized pro-democracy activists. 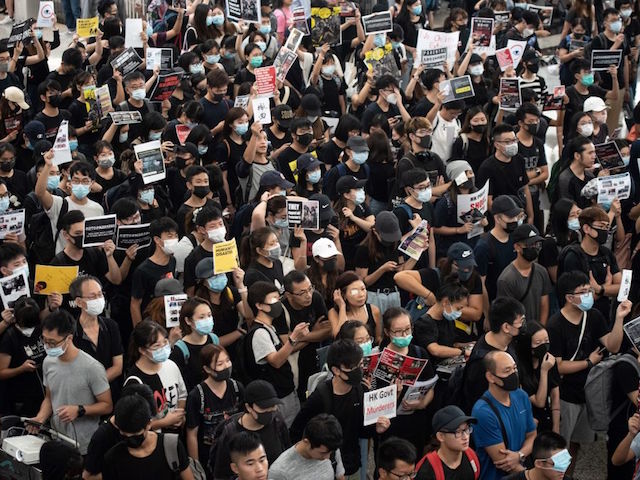 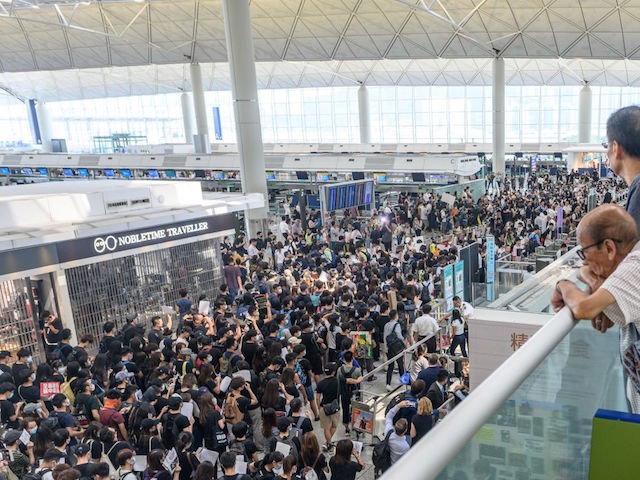 Hong Kong pro-democracy protesters (C) crowd the area in front of the departure gates to block access during another demonstration at Hong Kong’s international airport on August 13, 2019. (PHILIP FONG/AFP/Getty Images)

The protesters are demanding direct election of all Hong Kong lawmakers, freedom for imprisoned peaceful protesters, an independent inquiry on police brutality, an apology from the government for referring to the June 12 protest as a “riot,” and the full withdrawal of the controversial extradition bill.

To highlight the violence police have used against pro-democracy activists, protesters have used as an example the case of a young woman who is believed to have lost her right eye after police shot a bean bag at her face. Apple Daily published a video following the incident that its report claims proves that police shot the young woman’s eye out, as it clearly depicts the small bean bags police use as projectiles to silence dissidents. Police have since nonetheless denied that they have any confirmation that the woman lost her eye as a product of police activity.

Reports on Monday indicated that the young woman, who authorities have kept anonymous, had to endure a six-hour surgery to repair the rest of her face shattered by the bean bag. Witnesses say her eye following the alleged attack had swollen to the size of an egg. Sources within the hospital treating her told various Hong Kong outlets that she will likely lose vision in that eye.

The airport protesters gave homage to her by wearing eye patches with fake blood on them and carrying posters showing the damage to her eye. Some carried signs reading “give the eye back.” 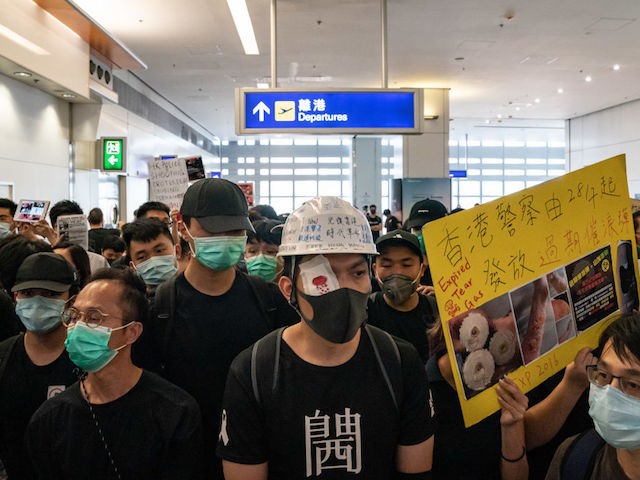 Protesters hold placards as they block the departure gate of the Hong Kong International Airport Terminal 2 during a demonstration on August 13, 2019 in Hong Kong. (Anthony Kwan/Getty Images) 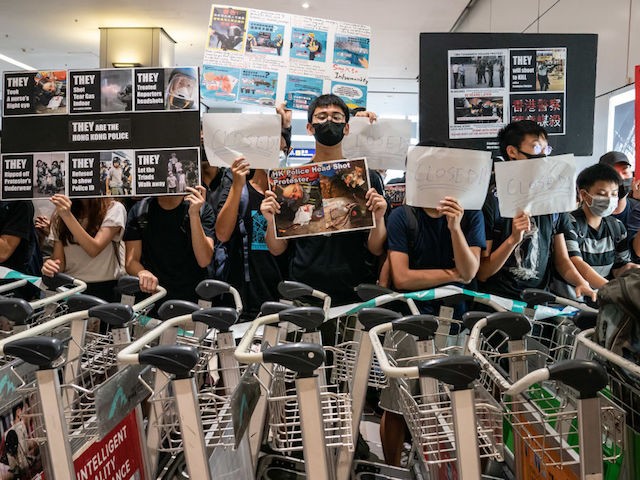 Protesters hold placards as they block the departure gate of the Hong Kong International Airport Terminal 2 during a demonstration on August 13, 2019 in Hong Kong. (Anthony Kwan/Getty Images)

Demonstrators also held up signs protesting the reported use of expired tear gas against protesters, which could have devastating health effects. Reports from inside the airport indicated that many protesters tried to engage stranded passengers by showing them videos of police brutality.

Another group of protesters reportedly set up a stand with an illustration of Chief Executive Carrie Lam’s face, which people threw fruit and shoes at.

Chinese state media has repeatedly accused the protesters of violence and defended police, despite evidence of police brutality. On Tuesday, the Global Times, an English-language state newspaper, once again claimed that the “rioters” were violent, now referring to them as terrorists, citing the terminology of the Hong Kong and Macao Affairs Office, Beijing’s outpost in the region.

China’s regime has refused to acknowledge the protesters’ demands save for the extradition bill request, which Lam claimed was unnecessary because the bill is “dead.” Lawmakers tabled the extradition bill, which keeps it from live debate but allows lawmakers to revive it at any time.
Follow Frances Martel on Facebook and Twitter.