Rally organizers said 380,000 people took the streets of Hong Kong Sunday for a protest themed “never forget” – a reminder to the city’s government that the protest movement’s victory in last week’s district council elections would not silence their four democratic demands.

Hong Kong residents have been organizing peaceful assemblies since June – the largest protest on record attracting 2 million people in a city of 7 million – demanding the government not cede to Chinese Communist Party attempts to subdue it. China has a right to sovereignty over Hong Kong under a policy called “One Country, Two Systems,” which bans Beijing from imposing communism.

The protesters are making five demands of their government: the full withdrawal of proposed legislation to allow Beijing to extradite anyone present in Hong Kong into China’s repressive and secretive prison system; freedom for all political prisoners; the direct election of lawmakers; an end to the government referring to protests as “riots;” and an independent investigation into police brutality.

Chief Executive Carrie Lam ceded to the first demand in September, forcing the Legislative Council to withdraw the extradition bill. The move prompted protesters to coin the new slogan “five demands, not one less,” refusing to allow Lam to disregard the other four – in particular, the demand for the direct election of all lawmakers, rather than subjecting the Legislative Council to the whims of a coalition of special interests that currently chooses who writes the city’s laws.

Sunday was the first day in some time that police issued a permit for large-scale protests in the city. Officers approved three rallies: the “never forget” rally, a protest against the police use of tear gas against children present in protest areas, and a rally thanking the United States for passing the Hong Kong Human Rights and Democracy Act, which allows Washington to curb Hong Kong’s special economic status if China violates “One Country, Two Systems.”

The “never forget” rally was reportedly the largest. According to its organizer, a protester identified only as “Swing,” 380,000 people attended; police claimed only 16,000 participated, though protesters have previously accused the police of deflating attendance numbers.

These numbers also do not apply to the other two large rallies organized on that day. 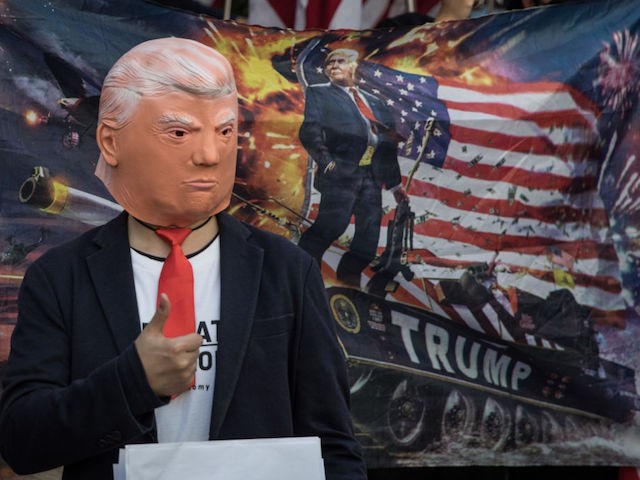 A pro-democracy protester wears a face mask of U.S President Donald Trump during a March of Gratitude rally to say thank you to the United States for their support on December 01, 2019 in Hong Kong. (Chris McGrath/Getty Images)

At the largest rally, the crowd reportedly chanted “five demands, not one less” while waving their five fingers in the air, in addition to other, more combative slogans like “disband the police force without delay” and “the heavens will eliminate the Chinese Communist Party, let the entire Party die,” according to the Epoch Times. 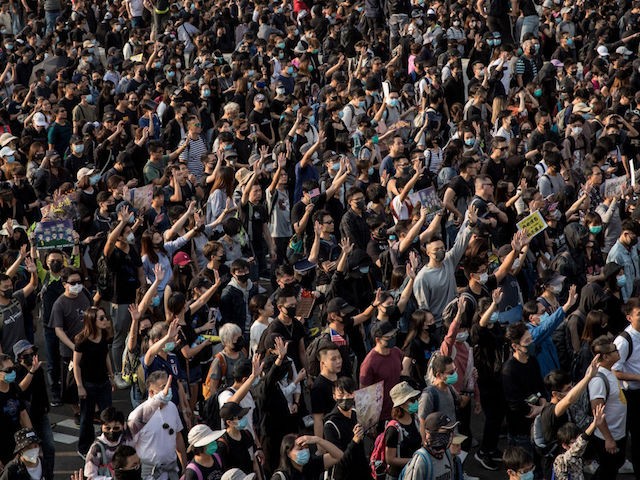 Thousands of pro-democracy protesters participate in a “5 Demands” mass rally on December 01, 2019 in Hong Kong. (Photo by Chris McGrath/Getty Images)

“It’s very important for the people to tell the government that we haven’t given up. So this is our demands; five demands not one less,” an unnamed college student told the broadcaster RTHK.

“Swing” had received a permit for a rally lasting from 3 p.m. to 6 p.m. Sunday local time, but police revolved the permit at 4 p.m. and began attacking the crowds with tear gas and pepper spray.

The early police attack on what appeared to be an otherwise peaceful protest triggered clashes in at least three neighborhoods: Tsim Sha Tsui and Mong Kok, which had previously seen unrest throughout the protest movement, and the Whampoa shopping district. The “never forget” rally occurred in Tsim Sha Tsui.

“At 3 p.m. today (December 1), protestors commenced a public procession in Tsim Sha Tsui. According to the agreed arrangement, the protestors would march from the Clock Tower to Hong Kong Coliseum via Salisbury Road,” the Hong Kong government said in a press statement explaining the abrupt attack on the peaceful march. “As some radical protestors passed by Mody Road Garden via Salisbury Road, they hurled bricks at Police officers. Police officers, in response, deployed the minimum necessary force, including tear gas, to stop their illegal acts.”

RTHK reported following the protest that police attacked the crowd with pepper pray and that “some people were seen throwing objects” at officers, but only after riot police targeted them for attack.

The Asian news outlet Coconuts reported that, following the police attack on the “never forget” rally, protesters began spreading out into Mong Kok and Whampoa. In the latter, the protesters began attacking businesses believed to have ties to the communist government and triads, local organized crime syndicates, by spray-painting anti-communist messages on their walls. Local reports confirmed the use of at least one Molotov cocktail against police in Whampoa

“Earlier in the evening, masked protesters were seen smashing up traffic lights, and several restaurants and shops deemed to be hostile towards the protest movement. Bricks and other debris were strewn all over the road in a bid to block traffic,” according to RTHK.

Some graffiti parodying Xi Jinping and vandalism of the local MTR station took place near Whampoa Gardens, after police departed.

Police responded by attacking crowds in the area. Many online expressed outrage at the police tactic of targeting underground rail stations with tear gas, essentially trapping anyone inside the station regardless of participation in the protests. Protesters recorded an incident in the Tsim Sha Tsui metro station in which police struck down an older woman – wearing white, without any indications of being a protester – leaving her on the floor, where protesters wearing gas masks came to her aid. The shove into the ground appeared to have caused a blow to the head.

Notorious #HKPoliceTerrorists pushed an elderly to the ground, with her head heavily hit, when she knelt down begging #hkpolice not to disperse #HongKongProtesters in #tsimshatsui. pic.twitter.com/MwMQw4OYUM

Ho Ka-yau, a member of the pro-democracy movement Demosisto, reportedly clarified on Facebook that the woman did receive a blow to the head and, while she did not bleed, did suffer from “swelling and dizziness.” It is not clear at press time if the woman was hospitalized or suffered a concussion.