The Uyghur Human Rights Policy Act denounces the arbitary detention of an estimated one million Uyghurs, Kazakhs and others in Xinjiang, home to the predominantly Muslim minority groups. It would require the State Department to evaluate whether Chinese officials would meet the criteria for sanctions for their roles in enacting oppressive policies.

The ruling Communist Party retaliated just hours after the passage of the legislation.

The bill “disregards the facts and mixes up black and white,” said the Foreign Affairs Commission of China’s legislature in one among a slew of strongly worded rebukes from government departments.

“It is regrettable that U.S. Congress has not only turned a blind eye to Xinjiang’s efforts to combat terrorism and protect human rights in accordance with laws and regulations, but also to Xinjiang’s current economic development, social stability, national unity and religious harmony,” the commission said.

The Chinese Global Times published an interview with an official in Xinjiang asserting the concentration camps there are “schools.” https://t.co/KeLKuH18YE

In a separate statement, Chinese foreign ministry spokeswoman Hua Chunying said the bill “deliberately defames the human rights situation in Xinjiang and discredits Beijing’s efforts to fight against extremism and terrorism in the region”.

“The core of the Xinjiang issue [in China] is not human rights, ethnic minority or religion; instead, the core is anti-terrorism and anti-separatism,” the statement said. “We warn the US that Xinjiang is China’s internal affairs and has no room for foreign forces.”

Beijing would respond further as the situation developed, the statement added. It did not specify what form a response might take, but mainland media on Tuesday reported that China was considering restricting U.S. officials and lawmakers from visiting Xinjiang and would soon release an “unreliable entity list” that would include “relevant U.S. entities”.

The latest House measure condemns the mass arbitrary detainment of Uyghurs and calls for closure of the re-education camps where they have been held and abused, according to rights groups and U.S. lawmakers. 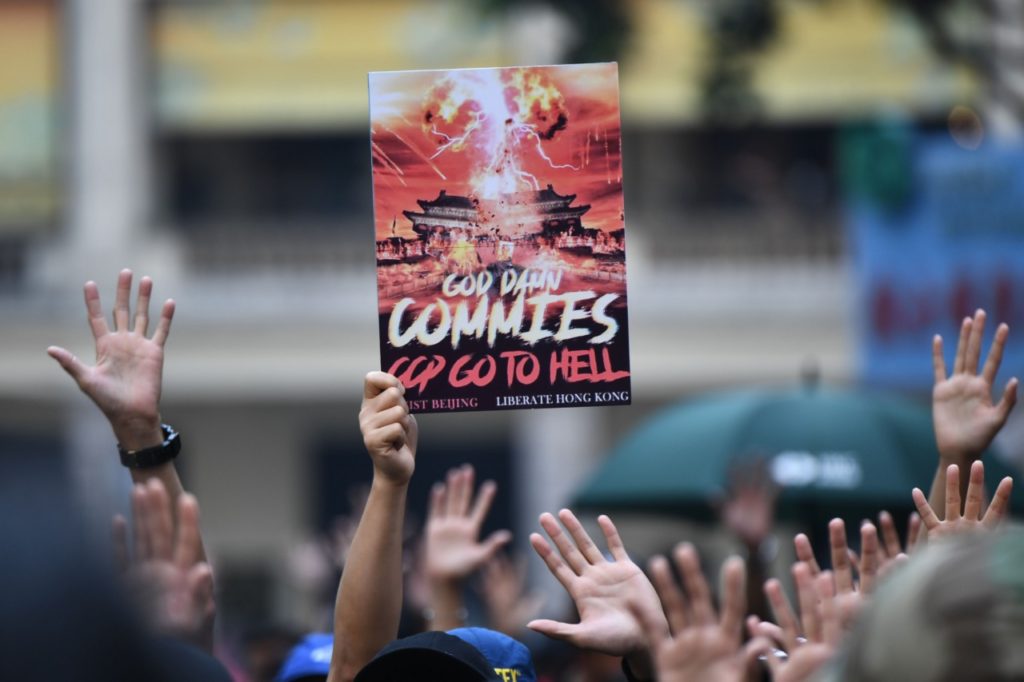 A protester holds up a placard that reads “God damn commies, CCP (Chinese Communist Party) go to hell” as others hold up their hands to signify their five demands at a rally in the Wanchai district of Hong Kong as the city observes the National Day holiday to mark the 70th anniversary of communist China’s founding.  (ANTHONY WALLACE/AFP via Getty Images)

The bill notably urges Trump to slap sanctions on Chinese officials behind the Uyghur policy, including Chen Quanguo, the Communist Party chief for Xinjiang.

China has repeatedly criticized the U.S. for interfering in its affairs, most recently accusing Washington of being a “black hand” that has orchestrated pro-democracy riots in Hong Kong.