“The outbreak will be short-lived, and it will not affect China’s competitiveness,” the state-run Global Times newspaper proclaimed Tuesday.

At press time, China has documented 72,439 cases of the newly discovered coronavirus originating in Wuhan, a central Chinese city of 11 million people. Of those identified as confirmed patients, 1,870 have died within China, the overwhelming majority. While most of those cases have been confirmed in Wuhan and the surrounding Hubei province, doctors have confirmed growing numbers of cases in Beijing, Shanghai, and Shenzhen, some of the most important urban centers to China’s economy.

The Wuhan coronavirus reportedly began spreading in Wuhan in mid-December; the Chinese Communist Party informed the public of the outbreak on January 20. Since then, the virus has spread to every province in the country and to places outside of communist rule like Hong Kong and Macau. To help contain the outbreak, Chinese officials have implemented strict lockdowns forcing many people to work from home. Those who cannot do so, like factory workers who need access to materials and machinery, have simply not been able to work.

In central Wuhan, the government has banned residents from leaving their homes. Former Shanghai Mayor Ying Yong – a loyalist to dictator Xi Jinping recently appointed head of the Communist Party in Hubei province, where Wuhan is located – implemented a ban from being out in public throughout Wuhan and several other cities in the province. According to the South China Morning Post, Ying imposed what he called the “strictest 24-hour lock-down management,” allowing individuals to leave their homes only in cases of emergency and to buy food and necessary supplies every three days. Any exit from a building requires government approval. Needless to say, commuting to work is not on the list of approved reasons to leave the house. 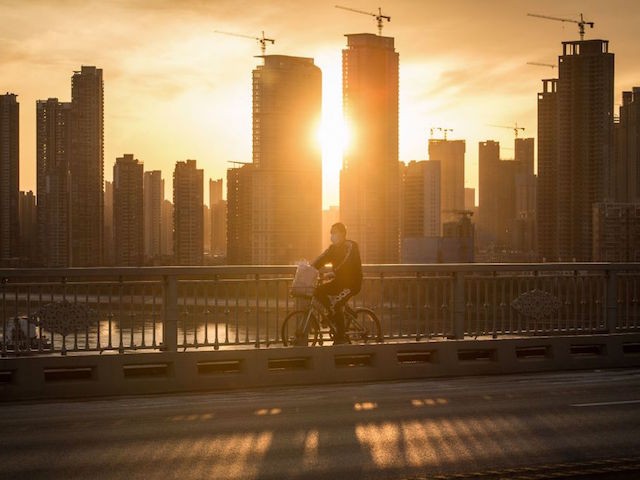 The Morning Post notes that, in total, over 80 cities nationwide have imposed lockdowns.

For Shanghai, Ying’s former city and one of the most important economic centers in the country, this has meant a near-total shutdown of business activity. A poll found this week that nearly 80 percent of companies active in the greater Shanghai area do not have the necessary number of employees present at work to run their companies. In the next month, 41 percent of companies surveyed said a lack of staff was their biggest concern. Shanghai has documented 333 cases of coronavirus and one death. 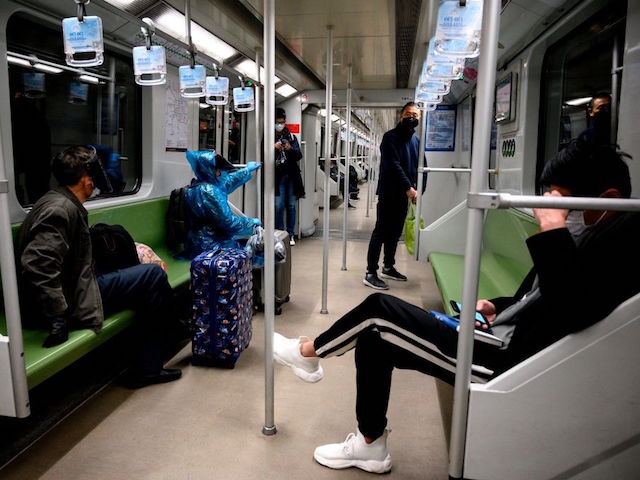 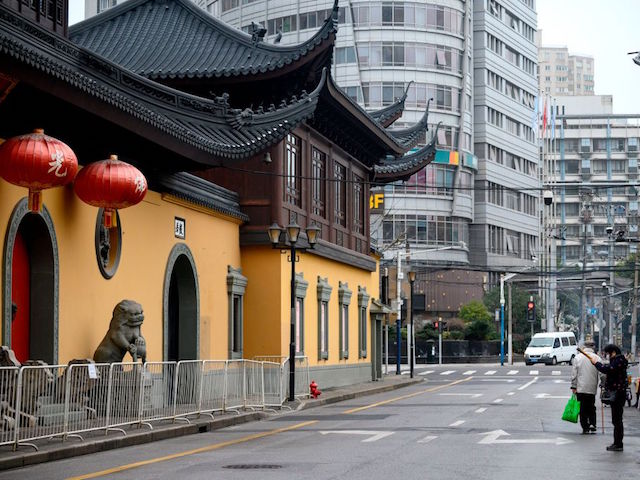 A woman wearing a protective facemask offers prayers outside the closed Jade Buddha Temple in Shanghai on February 14, 2020. (NOEL CELIS/AFP via Getty Images)

Shenzhen, the city bordering Hong Kong, has also seen a steep decline in economic activity. Shenzhen’s Guangdong province, largely considered the factory center of the country, has documented 1,328 cases of the virus and four deaths, many more cases than the more centrally located Beijing and Shanghai, though the same number of deaths as the national capital. Shenzhen has been deeply impacted by rural commuter workers choosing not to return to jobs where they may be exposed to the virus. Beijing estimates that as many as two-thirds of those workers are not back in factories nationwide, significantly hindering manufacturing. 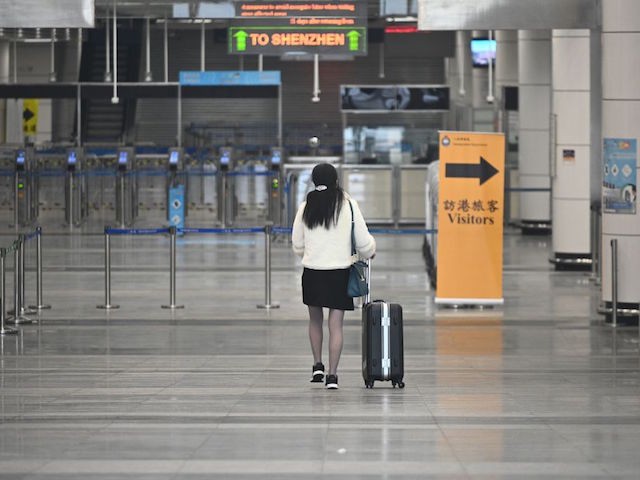 In Beijing, the most politically powerful city in the country, largely empty streets suggest a significant disruption in business as usual. 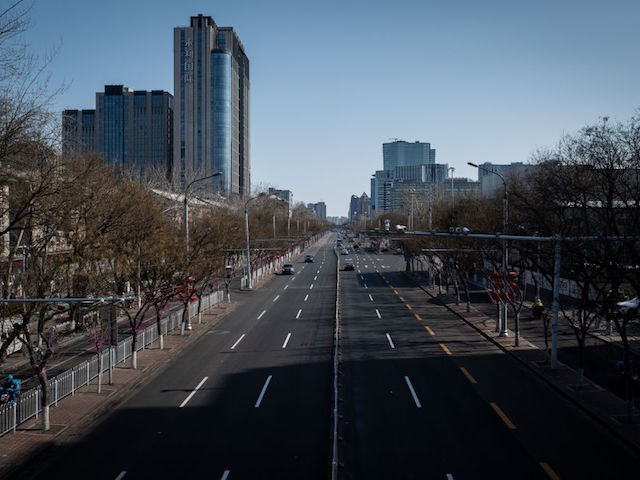 A nearly empty street is seen in Beijing on February 15, 2020. (NICOLAS ASFOURI / AFP via Getty Images) 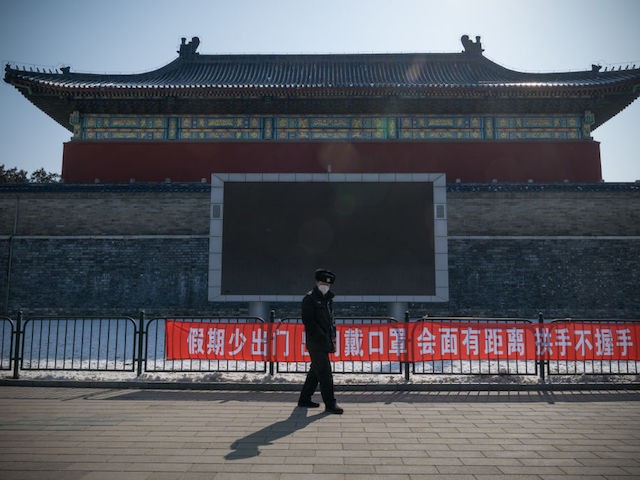 A security guard walks past a propaganda banner saying “Do Not Leave Home Often During Holidays, Wear a Mask When Going Out, Keep a Distance and Do Not Shake Hands When Meeting” on February 15, 2020, in Temple of Heaven Park, Beijing, China. (Andrea Verdelli/Getty Images)

The Communist Party is so concerned about an outbreak in the capital that it is considering the extraordinary move of postponing the “two sessions” – the annual full session of the National People’s Congress (NPC), the country’s rubber-stamp legislature, and of the People’s Political Consultative Conference (CPPCC), a celebrity advisory committee – until after the viral outbreak is under control. The “two sessions” typically bring thousands of high-level politicians together from around the country, potentially exposing them all to the outbreak. While the nominal government reason for considering postponement is to ensure these politicians are in their home provinces working on the outbreak, anonymously some in the government have expressed concern that such a large assembly would spread the illness to some of the Party’s most important cadres.

Viral infections among government employees are already a concern, as China has attempted to keep government offices open to show that the outbreak is under control. The Global Times reported on Tuesday that 69 people in one Beijing district office have been quarantined after a public worker tested positive for the virus there. The infected employee had traveled to Hubei province for the Lunar New Year holiday. 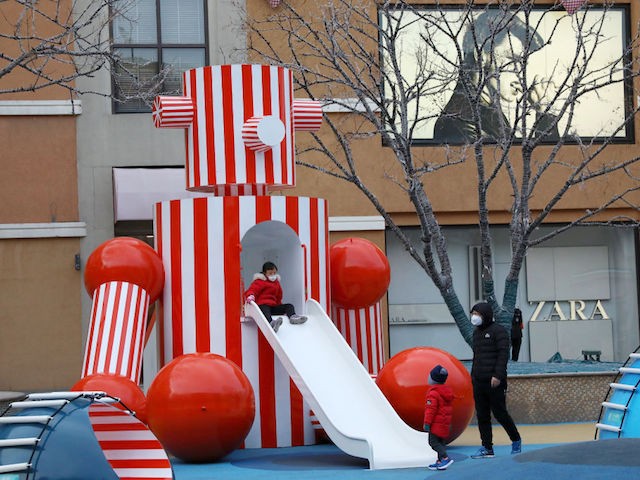 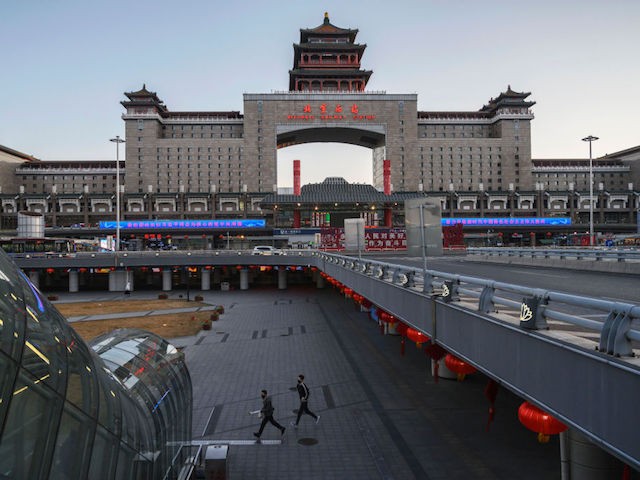 Chinese men wear protective masks as they run to the escalator in a nearly empty area outside Beijing West Railway Station on February 16, 2020, in Beijing, China. (Kevin Frayer/Getty Images) 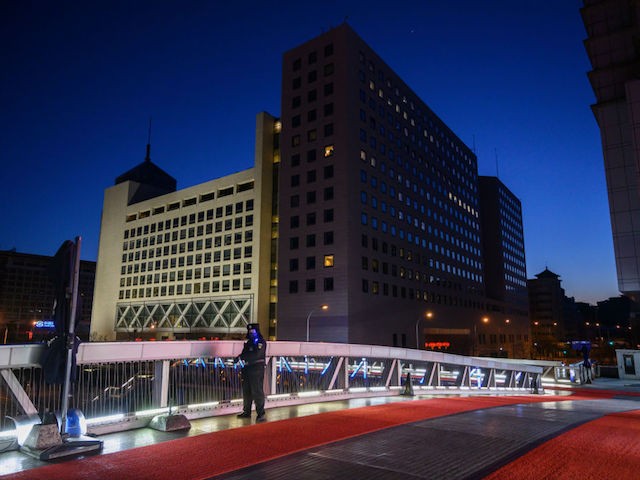 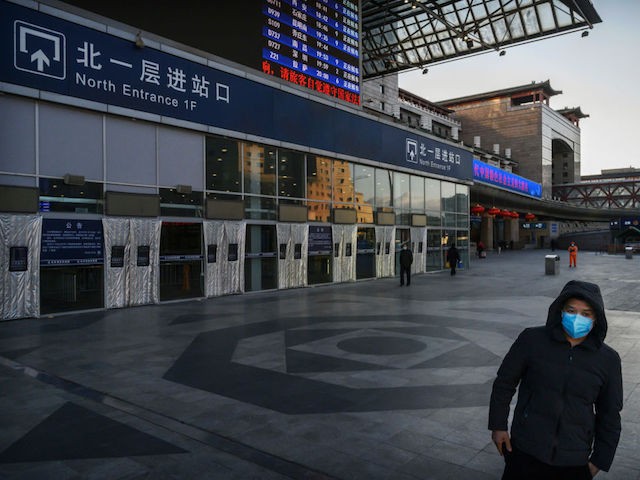 A Chinese man wears a protective mask as he stands outside a main entrance at Beijing West Railway Station as it is nearly empty on February 16, 2020, in Beijing, China. (Kevin Frayer/Getty Images)

The Global Times has nonetheless proclaimed that the demise of the Chinese economy is overestimated.

“The losses are huge, of course, and the specific numbers are yet to be counted, but the absolute numbers are certainly staggering,” the Times admitted on Tuesday in an article called “It Is Naive to Expect Chinese Economy to Collapse.”

Yet China’s sheer size means just as much maneuvering capability, and it is one of the most important indicators of strategic economic resilience. Some of the losses in services can be made up for, and a lot of them are lost, but they won’t be an internal wound to the Chinese economy. Over time, subsequent economic developments will allow the wounds to heal.

While China’s economy has suffered, there has been no disruption this time around.

The sectors of the economy that support the daily needs of the Chinese are revving up. With the exception of emergency supplies such as face  masks, which cannot be expanded to the level of demand, the supply of other daily necessities has not been reduced.

The newspaper also applauded the economy’s “slow yet steady start” this week on Monday.